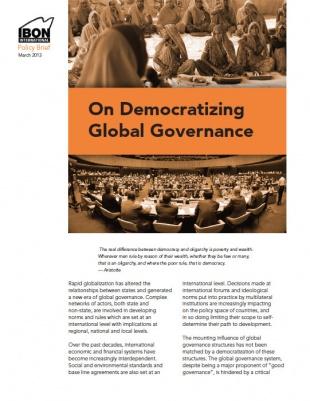 IBON Policy Brief, March 2013
IBON International has released a policy brief on addressing the democratic deficits in global governance and democratizing its major international institutions and processes.
Due to rapid globalization over the past decades, decisions about economic, social and environmental standards and baseline agreements have been set at international forums and have increasingly affected the policy space of countries, often delimiting their scope to determine their path to development.
This mounting influence of global governance structures has not been matched by a democratization of these structures. The global governance system, despite being a major proponent of “good governance”, is hindered by a critical democratic deficit—in which the wealthiest countries dictate the global governance agenda in the absence of transparency, accountability, and inequity in participation by developing countries.
As the MDGs target date of 2015 is fast approaching, the global development agenda—and the governance structures that will give it shape—are being subjected to renewed debate, examination and reconsideration. Thus the crucial question of democratizing the processes and structures of global governance has increasingly defined current policy debates. IBON International offers this policy brief as its contribution to that discourse.