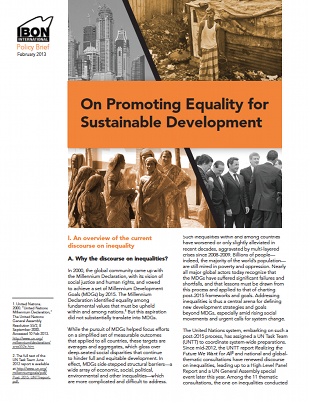 IBON Policy Brief, February 2013
IBON International has just released its policy brief entitled “On Promoting Equality for Sustainable Development.” This paper presents a wide range of policy proposals to tackle inequalities in all domains, which serve as structural barriers in achieving development goals premised on human rights, social justice, and sustainability.
The policy brief represents IBON’s continuing engagement in the growing discourse on addressing inequalities. It particularly responds to the recently released Synthesis Report on the Global Thematic Consultation on Inequalities prepared by UNICEF and UN Women in cooperation with the Governments of Ghana and Denmark as part of the UN’s post-2015 preparatory process.
The Global Thematic Consultation, which aims to address the issue of persisting inequalities as a central arena in formulating possible post-2015 frameworks and goals, gathered and synthesized inputs by countries, UN bodies, civil society actors and other stakeholders. IBON International has raised its own concerns in the form of a formal submission to an earlier draft Report, and is presenting this policy brief as a follow-up response to the final Report issued on February 8.
IBON International is also involved in a Campaign for People’s Goals (CPG), a network of grassroots organisations, labour unions, social movements, non-governmental organisations and other institutions that aims to forge new pathways to the future by challenging governments and the multilateral system to commit to real reforms that address the demands of the poor and marginalized, by campaigning for ten major thematic concerns. People’s Goal #2, in particular, addresses the central questions relating to poverty and inequality.
The participating organisations of the CPG, while pursuing an autonomous civil society campaign grounded in grassroots struggles, are also engaged in the official processes related to the post-MDG and the Rio+20 SDG agenda.