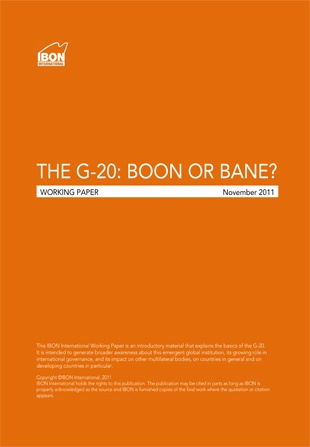 Working Paper
On November 3-4, 2011, the Group of Twenty (G-20) will hold its sixth summit in Cannes, France to once again tackle the problems besetting the world economy amidst the persistence of the global recession that started with the crash of 2008. The G-20 consists of 20 developed and newly-emergent economies that produce about 85 percent of global wealth, and whose collective clout and voice have become an increasingly powerful influence in moulding economic policies at multilateral, regional and country levels.
In the midst of the continuing global crisis, we will again be witness to the G-20’s efforts to seek solutions to the problems plaguing the world, especially its developing countries and billions of its poor. How will the G-20 leaders address obstacles to development, and prevent the exacerbation of poverty and inequality in the world? Is there reason to hope that the outcome of its Cannes summit will provide a viable way out of the current crises, if not long-term solutions?
The expanding role of G-20 and its policies have serious and immense implications on the entire global population, yet ordinary people from New York to Fiji and from Bolivia to China have only the vaguest idea of how its existence and operations affect their daily lives. This working paper by IBON International thus offers an introduction to the G-20—its origins and evolution, its current role and impact on the world economy and world affairs, and its implications on the rest of world, especially developing countries, which are excluded from its internal processes.