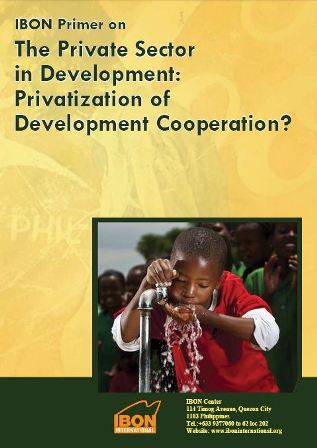 IN THE PAST FEW DECADES, states, civil society, and the corporate world have been obliged to review and rethink the whole range of development issues. As the world stumbled from crisis to crisis, all development actors have sought out new paradigms and pathways to alleviate the said crises or to change the system altogether.

The traditional divisions of roles between the state and business – between public and private sectors – are being questioned. A few strategies are revisiting the advantages of state-driven development and bigger roles fore civil society. But the more aggressively pushed strategies call for the exact opposite: the further expansion of private sector roles in development as the most crucial component.

This trend towards broader private sector roles may be discerned in the current United Nations-led course on the post-2015 agenda, in the 2012 UNCSD summmit that pushed for the so-called "Green Economy" agenda, in the annual UNFCCC climate talks, and in other global governance bodies such as the World Trade Organization and the G-20. The same debate is continuing in the area of aid and development effectiveness.

As the world approaches the crucial year of 2015, the basic question remains to be clarified: What is the role of the private sector in development? This IBON primer offers to pursue the question and find some answers that are especially relevant for developing countries and their people's aspiration for full, sustainable, and equitable development.