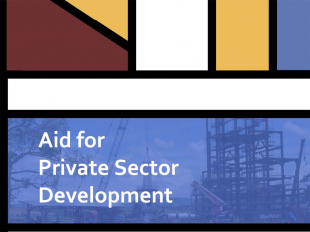 August 2011
Aid for Private Sector  Development
[[{“type”:”media”,”view_mode”:”media_large”,”fid”:”129″,”attributes”:{“alt”:””,”class”:”media-image”,”height”:”232″,”style”:”width: 310px; height: 232px; margin: 10px; float: right;”,”typeof”:”foaf:Image”,”width”:”310″}}]]
Since the 1980s, multilateral development banks (MDBs), donor agencies, development finance institutions and governments have increasingly promoted private sector growth as the cornerstone of national development strategies. While there is little in depth and up to date analysis on the relationship between ODA and the private sector due to a lack or differences in reporting, the vast majority of bilateral and multilateral donors have considerably increased their focus and engagement with the private sector.
The 2005 World Development Report found that “assistance provided by major bilateral and multilateral development agencies for investment climate improvements averaged USD 21 billion per year between 1998 and 2002 — or about 26% of all development assistance." The OECD estimates that the 22 DAC member countries spent between about USD 8 and USD 10 billion per year between 2001 and 2003, or 15% to 20% of their bilateral ODA for investment promotion — the bulk of it for infrastructure development2. The International Finance Corporation (IFC) reports that financing for the private sector from MDBs has increased tenfold, from less than $4 billion to more than $40 billion per year by 2007 –
issuepaperforbusan01.pdf
Tags: aid effectiveness, Busan paper, multilateral development banks, ODA, OECD