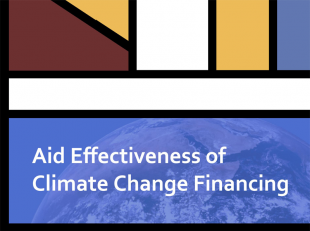 11 September 2011
Aid Effectiveness of Climate Financing
[[{“type”:”media”,”view_mode”:”media_large”,”fid”:”127″,”attributes”:{“alt”:””,”class”:”media-image”,”height”:”231″,”style”:”width: 310px; height: 231px; margin: 10px; float: right;”,”typeof”:”foaf:Image”,”width”:”310″}}]]
At the Rio Summit in 1992, the growing problem of climate change driven by anthropogenic greenhouse gas (GHG) emissions led to the signing of the United Nations Framework Convention on Climate Change (UNFCCC). Ratified by nearly 200 countries over the years, the treaty is fleshed out through its annual Conference of Parties (COP), with the Kyoto Protocol (KP) adopted at COP3 in 1997 as the most important so far.
Among the key UNFCCC principles is that of “common but differentiated responsibilities and respective capabilities” or CBDR. While stressing the common duty of all countries to face the climate challenge, the CBDR principle insists that the industrialized North, in producing the largest share of GHG emissions, should take the lead in mitigation (emission-reducing measures). On the same basis, the North should support adaptation (climate-proofing measures) in developing countries of the South, which contributed least to climate change and yet are more vulnerable to its impacts.
Under the UNFCCC and KP, 40-plus developed and transition countries and the European Union as a separate Party (Annex I countries) are enjoined to reduce their GHG emissions by specific targets, and 24 of these (Annex II countries, mostly with the OECD) to finance the mitigation and adaptation costs of developing countries.
issuepaperforbusan02.pdf
Tags: aid effectiveness, Busan paper, CBDR, climate change, climate finance, OECD, UNFCCC