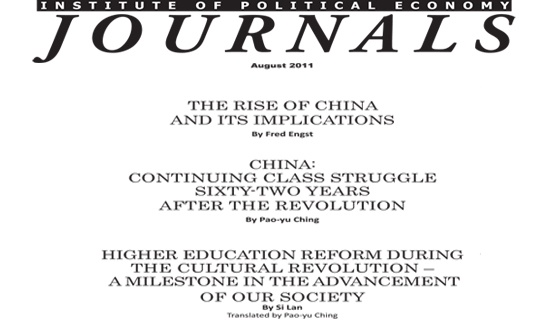 To achieve its goal to undertake research for policy formulation and the development of alternatives for socioeconomic issues in the Philippines and the world, the Institute of Political Economy is pleased to announce the release of its August 2011 Issue.
This publication includes three articles: the first by Fred Engst on the rise of China as a key player in the world capitalist economy and its implications; the second by Pao-yu Ching on the continuing class struggle in China 62 years after the revolution; and the third by Si Lan (translated by Pao-yu Ching) on higher education reform during the Cultural Revolution.
To access the journal, follow this link: http://politicaleconomy.info/custom_download/IPE%20Aug%202011%20.pdf.
The Institute of Political Economy conducts: in-depth research of value to a better understanding of socioeconomic issues and the formulation of socioeconomic policies and alternatives; forums, public discussions, and similar activities on major socioeconomic issues; and trainings on policy studies. The institute is currently being hosted by IBON International.
For comments and suggestions, kindly contact Paul L. Quintos, Coordinator of the Institute of Political Economy, at pquintos [AT] iboninternational.org.
Tags: IPE, journal, socioeconomic

Advance efforts at the ICC to hold Duterte accountable