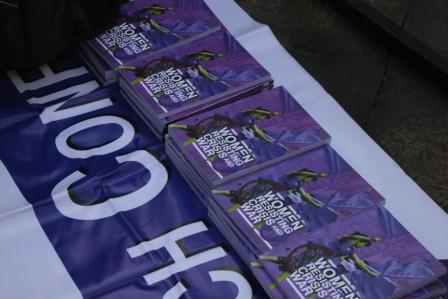 BRUSSELS, Belgium–Over a hundred representatives from various countries, civil society groups and grassroots organizations gathered at the European Parliament to hold the Conference on Democracy, Self-Determination and Liberation of Peoples last September 23, 2013. Organized by the offices of Members of the European Parliament Jürgen Klute and Inaki Irazabalbeitia, IBON International and KONKURD (Confederation of Kurdish Associations in Europe), the conference aims to reaffirm the fundamental principles enshrined in the various UN declarations on the collective rights of peoples to self-determination and liberation.

An initiative supported by the European United Left/Nordic Green Left Group (GUE/NGL) and the Greens/European Free Alliance of the European Parliament, the conference was attended by estemeed and highly respected speakers such as Dr. Hans Köchler (International Progress Organization, Austria), Cynthia McKinney (former member of the US House of Representatives), Luis Jalandoni (National Democratic Front, Philippines), and other field specialists and grassroots organizers advocating for economic democracy, self-determination, peace, women's rights, collective rights and liberation of peoples.
The conference was created in response to the continued violations and threats against the various human rights recognized by the international community and the imperative demand to reaffirm these rights in the face of challenges generated by the war on terror and foreign intervention that tend to negate the national sovereignty of countries and the right of peoples' to self-determination. Participants shared their own experiences concerning their own people's resistance to various forms of human rights violations and other conditions of inequality and injustice.
Aside from the main sponsors, the event is also sponsored and endorsed by many international organizations such as ABERTZALE LEFT, CENI (Kurdish Women's Office for Peace), Indigenous Peoples' Movement for Self-Determination and Liberation (IPMSDL), International Women's Alliance (IWA), International Action Center, Mondial Pour Les Droits Des Peuples Collectifs (Federation of Collective People's Rights) and the People's Forum on Peace for Life. The conference is set to release an outcome document that contains the main points of unity agreed upon during the whole-day event.
Click here for more information on the Brussels Conference 2013.
Tags: Belgium, Brussels, conference, CSOs, democracy

The Struggle for Agreement on Climate Change (July-August 2012)