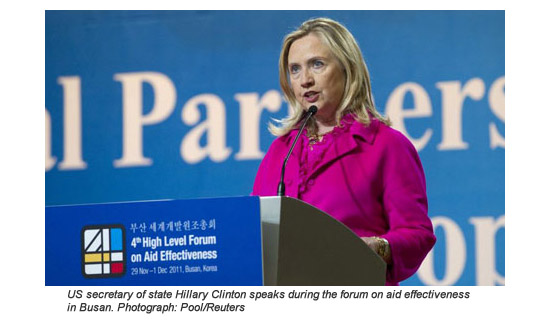 Busan, South Korea — International non-government organization IBON
International today took the US government to task for its aid policies that have largely influenced how aid is defined according to the interests of donor governments. Civil society groups gathered in Busan, South Korea questioned the sincerity of the US as Secretary of State Hillary Clinton delivered a speech at the Opening Ceremony of the 4th High Level Forum on Aid and Development Effectiveness
Clinton’s participation in the HLF4 is part of the US State Department's ongoing efforts to elevate the role of development alongside diplomacy and defense as a key pillar of US foreign policy and national security agenda, as well as a key component of US economic statecraft.
But Antonio Tujan Jr., International Director of Ibon and Co-Chair of the Better Aid Global Platform of CSOs, remarked that much of what is wrong with the aid system today is demonstrated by the US.
“Aid from the US goes primarily to countries that serve its geopolitical interests, rather than the countries most in need of assistance”, according to Tujan. The top four recipients of total US foreign assistance in 2010 include Afghanistan, Pakistan, Haiti and Israel – together accounting for over 28%.  “And we must not forget that Egypt was the second biggest recipient of US aid in the Middle East up to the dying days of the Mubarak regime”, added Tujan.
US foreign assistance also comes with strings attached.  This means US aid programs and projects overseas are often implemented by US companies using US consultants and US goods.  So most of the value flows back to the US instead of promoting development or building capacities in poor countries.
The US also attaches policy conditionalities to its assistance. Under its Millennium Challenge Account, only developing countries that meet strict criteria are eligible.  These criteria include fighting corruption, public investment on education and health care and “economic freedom” which means eliminating government regulatory functions, dismantling barriers to the free flow of trade and investment; and privatization.
“These are the same set of neoliberal policies that have undermined national development, destroyed numerous local industries and jobs, and widened the gap between the 1% and the 99% of the world”,  according to Tujan.
IBON urged the US and the rest of the donor community to abandon the old discredited development strategies based on private sector-led growth and embrace a new paradigm of sustainable development focused on improving the well-being of all as well as future generations.
Tags: Busan, CSOs, HLF4, South Korea

20 years of WTO: A Tale of Two Economies

Pushing the Boundaries of Official Development Assistance: Challenges and Opportunities