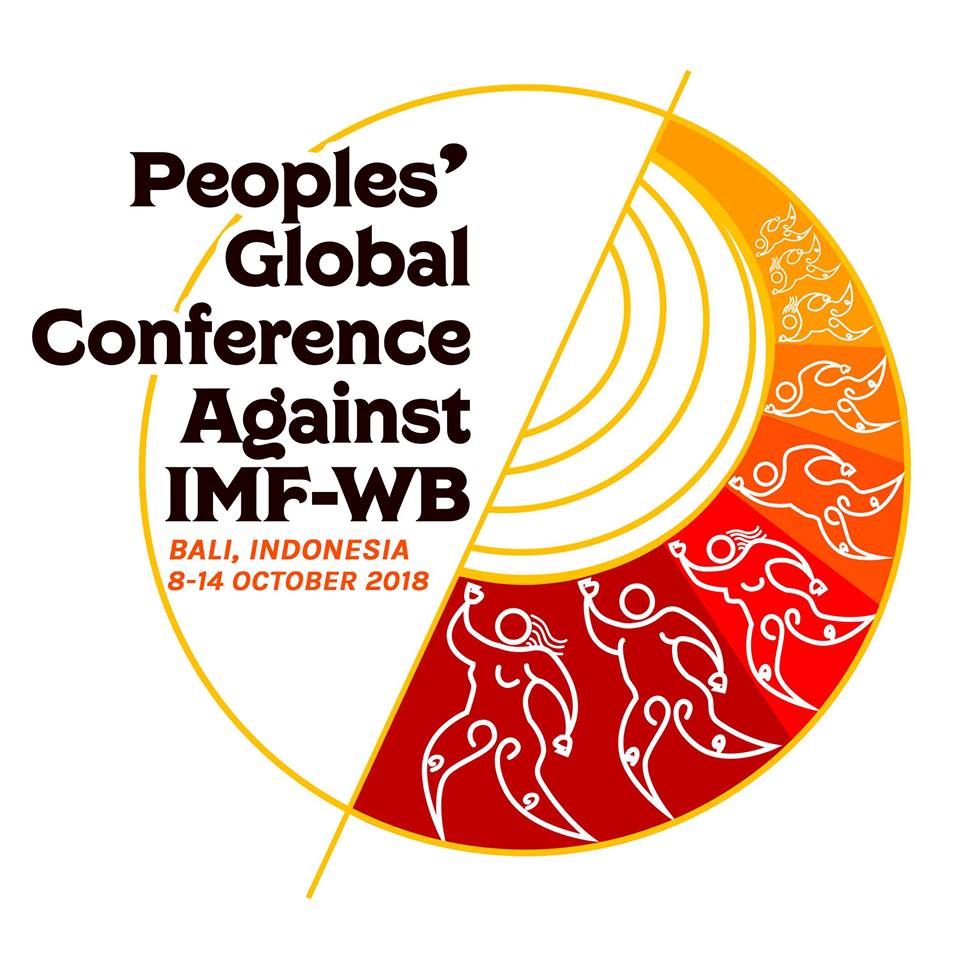 On October 8 to 14, people’s movements and civil society organisations will gather at the People’s Conference against IMF-World Bank in Bali, Indonesia, as the Annual Meetings run from October 12-14.

​An independent, people-led initiative, the Conference will register peoples’ resistance on how the IMF-WB promotes the capture of resources, economies, and global rulemaking by a few wealthy states and their transnational corporations. It will be held with the theme “Reclaim our rights and future: Fight corporate takeover of development!”

“Through the US-led IMF-World Bank, and the complicity of the domestic elites, Southern economies in the Asia-Pacific have increasingly ‘opened up’ only to multiply profits for Northern transnational corporations (TNCs) while subjecting peoples to unemployment, poverty and inequality,” Jaz Lumang of the Asia-Pacific Research Network said.

Amy Padilla of IBON International is concerned about the IMF-WB’s continued pro-corporate agenda. “Under the guise of ‘maximizing finance for development’, the World Bank will favour profit-driven investments for public needs, such as infrastructure. This poses serious threats to peoples’ fundamental rights and will further channel ever shrinking public resources into the hands of corporations,” she said. “The upcoming Annual Meetings will once again threaten to reinforce this greater corporate capture of the development agenda,” she added.

Azra Sayeed of the International Women’s Alliance (IWA) meanwhile sounded the alarm on IMF-WB’s role in aggravating conflict and militarism.

“IMF-World Bank sponsored projects, particularly megaprojects in infrastructure and extractives and energy, are displacing marginalized and vulnerable communities, such as the rural poor and indigenous peoples. Such displacements are often accompanied with state-sponsored violence and militarism. In the current era, the distinction between soft power and hard power policies is becoming less defined as imperialist countries scramble for greater access to resources and markets in the Global South”, according to Sayeed.

Indonesian movements have also shown their support for the People’s Conference. “We join other people’s movements and civil society organisations in the clamour for our economic rights amidst the continued neoliberal onslaught of the IMF-WB,” Kurniawan Sabar of INDIES Indonesia said. “We would like to manifest that Indonesian workers, farmers, women and youth have had enough,” he added.

“The threat of even bolstered corporate power and their capture of development would only mean greater obstacles for people’s economic rights,” Ivan Enrile of People Over Profit said. “It is high time for peoples to take back our right to people-led development against this imperialist globalisation supported by the IMF-World Bank and other international finance institutions,” Enrile added.
​
The Conference is organised by the Gerakan Rakyat Menentang IMF-WB and the International Organizing Committee composed of Asia Pacific Mission for Migrants, Asia Pacific Research Network, Asian Peasant Coalition, IBON International, Indigenous Peoples’ Movement for Self Determination and Liberation, International League of Peoples’ Struggle, Pesticide Action Network – Asia Pacific, Peoples’ Coalition on Food Sovereignty, People Over Profit, and Reality of Aid – Asia Pacific. ###