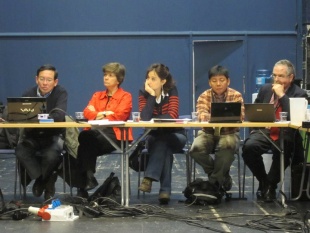 MEDIA RELEASE
December 4, 2011
[[{“type”:”media”,”view_mode”:”media_large”,”fid”:”101″,”attributes”:{“alt”:””,”class”:”media-image”,”height”:”233″,”style”:”width: 310px; height: 233px; margin: 10px; float: right;”,”typeof”:”foaf:Image”,”width”:”310″}}]]
DURBAN, South Africa (December 2, 2011)—The World Bank’s so-called triple win solutions of “Climate Smart Agriculture” drew heavy flak at a side event organized yesterday by five major civil society groups at the ongoing 17th Conference of Parties (COP17) meeting of the UN Framework Convention on Climate Change (UNFCCC) here in Durban, South Africa.
The five groups are Pesticide Action Network Asia-Pacific (PAN AP), Peoples’ Coalition on Food Sovereignty (PCFS), SIBAT (Wellspring of Science and Technology), IBON International, Peoples’ Movement on Climate Change (PMCC).
Titled “Weathering the Climate Crisis: The Way of Ecological Agriculture,” the side event featured resource persons from different farmers groups and advocates, who warned of the World Bank’s aggressive moves to push its agriculture agenda in the current UNFCCC negotiations. They said that WB’s “climate-smart agriculture” is nothing but a scheme to cover up the culpability of big agro-corporations for the GHG emissions of the agricultural sector.
“(The) World Bank promotes the ‘climate smart agriculture’ agenda as a smoke screen for the widespread landgrabbing, monocropping, toxic inputs and other unsustainable practices of corporate agriculture that compound the climate crisis,” Roy Anunciacion, secretariat coordinator of the PCFS said during the discussion.
Helena Paul of Econexus likewise shared her critique of the UNFCCC negotiations where climate smart agriculture is gaining pre-eminence, with the endorsement even from South Africa, the host of this year’s climate talks.
Teresa Anderson of Gaia Foundation also explained that carbon offset schemes have significant implications for agriculture, especially with regard to food security, culture and peoples’ rights. She also added that in areas where projects were implemented, bulk of the funds was spent on high-paid consultants and experts while small-scale farmers received almost nothing.
To show that farmers have been countering corporate farming through agro-ecological practices, Lawrence Mkhalipi of Biowatch shared his group’s practice of agroecology in South Africa without the use of harmful fertilizers, and by creating local seed banks along other methods of preserving biodiversity and the environment.  Vicky Lopez of SIBAT stressed that fundamental to farmers’ self-reliance is the issue not just of access to, but control of resources such as land, seeds and water.
The panel of speakers spoke in unison to call for the junking of Climate Smart Agriculture being peddled by the World Bank and agro-corporations and vowed to help in exposing the scheme that is now being pushed as the vehicle for the “triple win” solution to the problems of mitigation, adaptation and food security.
MEDIA_RELEASE_Durban_Dec_2_2011.pdf
Tags: climate change, climate smart agriculture, COP17, Durban, South Africa, UNFCCC

ILPS Inter Views: Demba Moussa Dembele on the Challenges and Prospects of Political, Economic, and Monetary Sovereignty in West Africa