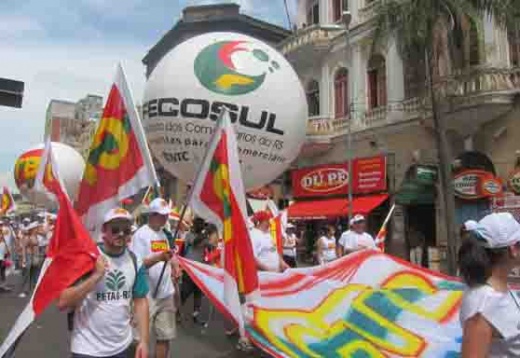 On January 25, around 62 participants from various civil society organizations and social movements from Latin America, Africa, Asia, Middle East and North Africa, and Europe participated in a self-organized side event in Porto Alegre entitled "Civil Society Workshop on Alternatives and Peoples Struggles for Sustainability".
[[{“type”:”media”,”view_mode”:”media_large”,”fid”:”88″,”attributes”:{“alt”:””,”class”:”media-image”,”height”:”233″,”style”:”width: 310px; height: 233px; margin: 10px; float: right;”,”typeof”:”foaf:Image”,”width”:”310″}}]]
This activity was  jointly organized by IBON International, ABONG (Brazilian Association of Non-Governmental Organizations) and the People's Coalition on Food Sovereignty to launch the "Rights for Sustainability" initiative as a contribution towards the United Nations Conference on Sustainable Development or more popularly known as Rio+20. The said initiative was also launched in another civil society workshop held in New York City on January 24.
The main objectives of the side event were (1) to share people's perspectives, knowledge and practices on sustainable development while identifying enabling or disabling conditions for these alternatives, (2) to assert people's rights to common goods and explore cooperation among movements and civil society groups, and (3) to explore possible cooperation for the Peoples' Summit on Rio+20 in June.
Aldalice Otterloo of ABONG gave the opening and welcome remarks. Pablo Solon, a sociologist, researcher, activist and Bolivia's former Ambassador to the United Nations, was the keynote speaker who presented a critique on Green Capitalism and the Green Economy agenda.  He further talked about the dangers of the financialization of nature and the promotion of carbon markets in the Green Economy model.
Panel 1 was composed of Tony Clarke of Polaris Institute and Isaac Rojas of Amigos de la Tierra – Costa Rica who were both asked to talk about the road from Durban to Rio and their critique of green capitalism and the Green Economy model. Tony Clarke, Director of Polaris Institute and co-recipient of the 2005 Right Livelihood Award, called the Green Economy as the ‘greening of capitalism’ and emphasized on the need for system change. Isaac Rojas, International Coordinator of Amigos de la Tierra – Costa Rica, called the green economy a 'perverse' attempt of the capitalist system that has been attacking nature and people for years.
Panel 2 featured Anil Naidoo of the Council of Canadians and Nicole Benedicto of Solidaridad who both talked about people's resistance to resource grabs in defense of the common goods. Mr. Naidoo stressed that the Green Economy agenda is a desperate move of a very desperate capitalist system to save itself from the multiple crises. Meanwhile, Nicole Benedicto provided a narrative of peoples' struggles all over the world against intensified resource grabs and in defense of common goods.
The last panel was composed of Michel Lambert of Alternatives and Ivo Lesbaupin of ABONG who both focused their presentations on development and system change, a fundamental challenge beyond Rio+20. Michel Lambert of Alternatives talked about the Canadian tar sands struggle against the Keystone Pipeline project which will destroy indigenous territories and lives. Ivo Lesbaupin of ABONG, a Brazilian NGO platform, stressed the need to push for the Common Good of Humanity, and called on governments to rethink their role in the economy and promotion of peoples' welfare.
Tetet Nera-Lauron of IBON’s Climate Justice Programme, moderated the discussions and invited the audience to be part of the Rights for Sustainability (R4S)  which aims to promote a rights-based approach to sustainable development as a way of ensuring that inter- and intra-generational equity and justice are central concerns in the reform agenda at Rio+20 and beyond. For comments and suggestions regarding the campaign, you may contact Paul Quintos of IBON International at pquintos.ibon@gmail.com.
This self-organized side event was officially part of the Thematic Social Forum held from January 24-29, 2012 in Porto Alegre, Brazil. The theme of this year's forum was "Capitalist Crisis, Social and Environmental Justice". It was organized as a preparatory stage for the Rio+20 People’s Summit in June. ###
Media_Release_-_Porto_Alegre.pdf
Tags: Brazil, CSOs, green economy, R4S, RIO+20, workshop

ILPS Inter Views: Demba Moussa Dembele on the Challenges and Prospects of Political, Economic, and Monetary Sovereignty in West Africa