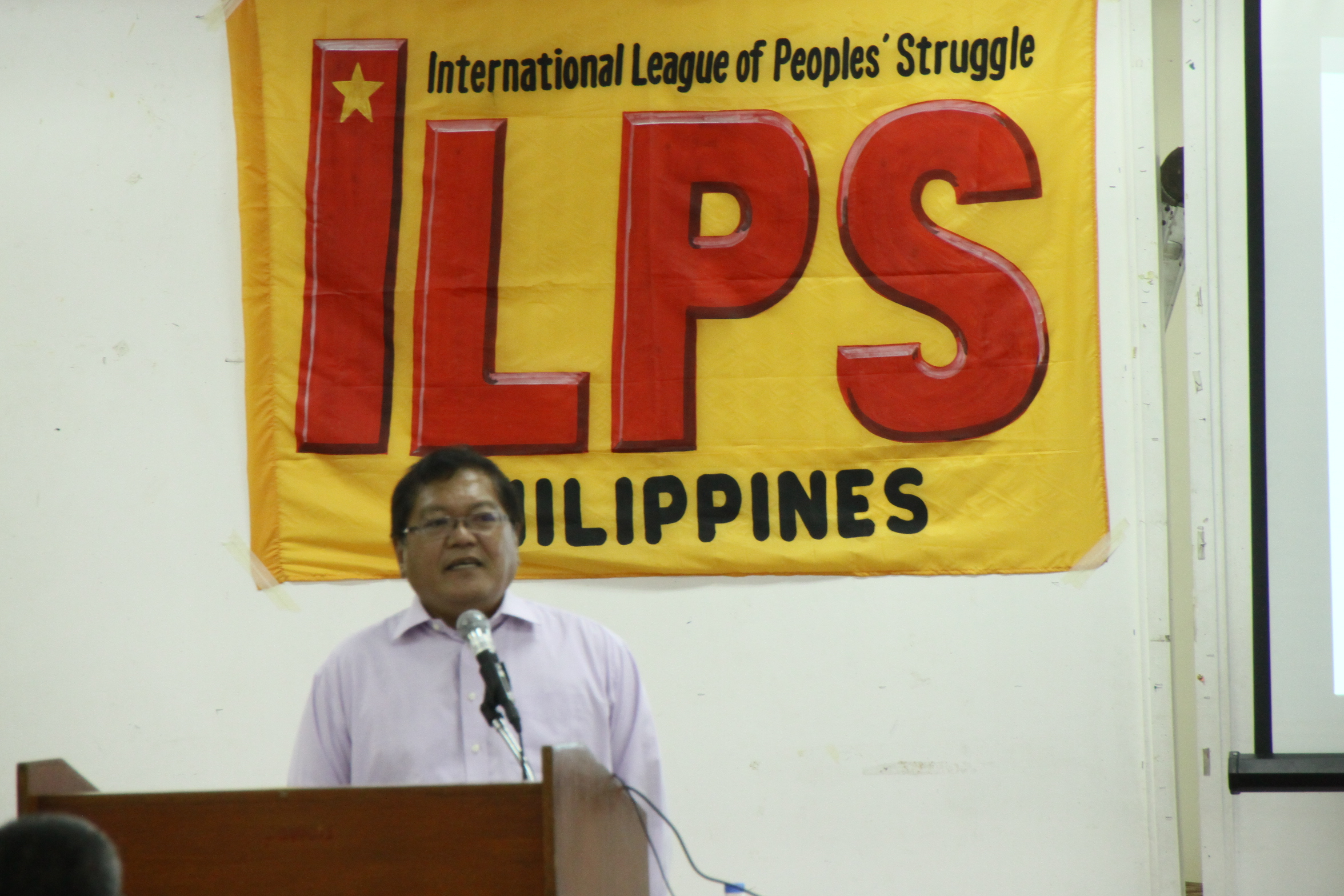 [[{“type”:”media”,”view_mode”:”media_large”,”fid”:”830″,”attributes”:{“alt”:””,”class”:”media-image”,”height”:”320″,”style”:”width: 350px; height: 233px; margin: 5px; float: right;”,”typeof”:”foaf:Image”,”width”:”480″}}]]
More than 260 scholars and learners of international studies attend the "Crisis, Conflicts, Change: A Forum on World Trends" at the University of the Philippines (U.P.) in Diliman, Quezon City on March 9, 2015.
The forum was organized by Ibon International, the U.P. Center for International Studies, U.P. College of Social Work and Community Development (CSWCD) and the Philippines Chapter of the International League of Peoples’ Struggle (ILPS-Phils).
Dr. Ma. Theresa Tungpalan, College Secretary of UP-CSWCD, welcomed the forum as host.  In her opening remarks, she said that “analysis is important and so does its relation to national and global issues to realize and act for change in the interest of the great majority.”
Dr. Cynthia Neri Zayas, Director of the U.P. Center for International Studies, hopes that the forum “generates the much needed interest in the study of global issues” and “in organized efforts in acting upon these issues.”
The main speaker at the forum is Mr. Antonio Tujan, Director of Ibon International.  He presented in bold strokes: the socio-economic crisis, the geopolitical conflicts and realignments, and the rising people’s resistance.
In discussing the crisis, Tujan noted that the global economy is still stuck in low gear.  There is a slowdown and uneven growth in developed countries citing a 15-year trend of GDP growth in Europe, Japan and the US.  There is also a slowdown, he said, in BRICS countries together with Indonesia. For the developing world, there is a chronic crisis seen not in GDP growth rates but in socio-economic indicators such as poverty and unemployment.
Tujan discussed the financialization of the economy under globalization. The over-all trend of world production, citing real GDP figures and periods of recession from 1945 to 2015, is getting lower. Total value of all derivatives as against world output from 1987-2006 shows the finance sector out-stripping production.
To cope with the crisis, strategic adjustments are being made by monopoly capital states and TNCs.  Along with neoliberal measures, the role of the private sector is expanded, corporations drive for “green economy”, refocusing on Asia not only by Europe and the US but by Russia as well, and the post-Bali offensive of the World Trade Organization.
Compounding the crisis is the steady worsening of climate change and its impacts, man-made disasters and recurring crises in food, energy and resources.
Current conflicts and realignments around the world is summed-up by Tujan as intensifying big-power rivalries, increasing militarism, armed conflicts and the rise of fascism and the national security state.
The US and the EU are seen in tandem, together with Japan as a US ally in Asia-Pacific, and a Russia-China Alliance and particularly Iran rising against the Western powers.  There is increasing US military presence worldwide, big military spending and wars of aggression.
Amid all these, Tujan noted, is growing mass unrest, politicized movements, workers struggles, peasant resistance, broad struggles and anti-imperialist liberation struggles. ###
Tags: forum, IBON International, ILPS, people's struggles