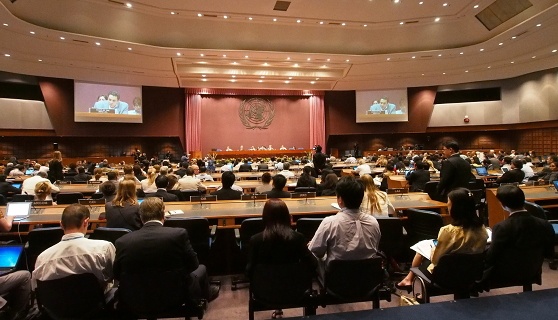 [[{“type”:”media”,”view_mode”:”media_large”,”fid”:”66″,”attributes”:{“alt”:””,”class”:”media-image”,”height”:”178″,”style”:”font-size: 12px; width: 310px; height: 178px; margin: 10px; float: right;”,”typeof”:”foaf:Image”,”width”:”310″}}]]
(BANGKOK, Sept. 1, 2012) —There is probably nothing more compelling and interlinked and yet increasingly pitted against each other in the ongoing climate negotiations than the twin imperatives of equity and ambition.
Equity is at the core of the UN Climate Convention, and Parties have an obligation to uphold this tenet. This means acknowledging that developed countries, which have contributed the most to the climate crisis, have a historical responsibility to take the lead in cutting emissions, as well as to provide finance and technology to developing countries (and their peoples) who are suffering from the impacts of climate change. This is in keeping with the principle of “common but differentiated responsibilities and respective capacities” (CBDR) agreed upon in 1992.
And yet there is a an ocean of divide among Parties on defining and agreeing to the level of global ambition to address climate change and steer the world away from further harm. What is the level of emissions reduction that science says must be achieved to stave off runaway climate change? What measures and mechanisms are needed to enable these? How is it possible to achieve this?
These are but a few of the questions in today’s discussions at the 2nd Roundtable on Ambition of the Ad-hoc Working Group on the Durban Platform (ADP) where we see a divergence of views by developed and developing countries.
Korea acknowledged that the global vulnerability to climate change is growing and that a balanced allocation of resources between mitigation and adaptation is needed in order to face the “clear and present danger” of climate change. It called for a low carbon green economy to achieve the temperature objectives with climate actions legislated at the national level, and even recommended to further civil society engagement.
Switzerland said we cannot move towards an efficient post-2020 regime if we don’t increase our ambitions now, and what was needed was to address the two stumbling blocks, i.e., (a) technical—not fully understanding the potentials for individual and joint actions; and (b) political backing to undertake ambition. However, Switzerland maintained that the ADP was not established to do the same things that are already being tackled in other working groups.
Norway posited that current pledges are insufficient and acknowledged that developed countries must continue to take the lead after 2020, and appealed for an “increase in mutual trust” among Parties.
Bolivia’s intervention raised a number of concerns and questions on what is happening in the negotiations for a 2nd commitment period under the Kyoto Protocol (2CP).  Some Parties think that a 2CP won’t work and would rather pursue a “pledge and review” system, i.e., emissions reduction targets are set individually and there is no way to make countries accountable to pledges made.
Barbados said that ambition must be based on the scientific imperative to impose necessary reductions to achieve the long-term goal of keeping temperature rise in check to 1.5 degrees and lower. It also emphasized the need for context (minimizing the risks associated with the adverse impacts of climate change) to be at the forefront of the work on ambition in order to close in on the “ambition gap.”
Meanwhile, Japan said that other approaches and opportunities for mitigation using the market should be comprehensively utilized and promoted. It also called for identifying a “roadmap of technology development” and promoting international cooperation “within and outside the UNFCCC (United Nations Framework Convention on Climate Change)” to realize global goals.
Equity and ambition: a tale of two crises at the climate negotiations—which the world cannot afford to have especially at this time. ###
_____________________________________________________________________
Photo credit: Undersecretary Segfredo Serrano of the Philippines' Department of Agriculture
Tags: Bangkok Intersessional, climate change, Durban Platform, Kyoto Protocol, UNFCCC