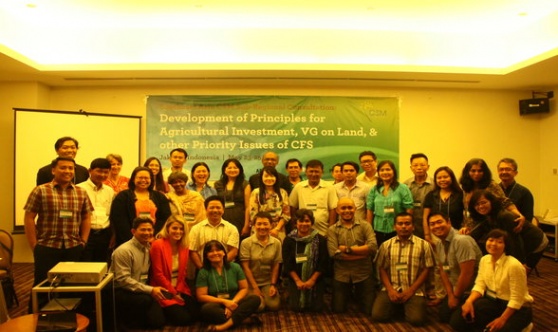 Food sovereignty coalition organizes first SEA consultation on dev’t principles for agricultural investment
JAKARTA, Indonesia – The People’s Coalition on Food Sovereignty (PCFS) organized the first Southeast Asia Civil Society Mechanism Consultation (CSM) on the Developments of Principles for Agricultural Investment, VG on Land and other priority CFS issues last May 23-25. The event was made possible by the efforts and initiatives of six regional organizations within the CSM Southeast Asia Working Group (CSM SEA SG). PCFS managed to induct new members and networks coming from Mongolia, Pakistan, India, Cambodia, Thailand, Vietnam, Indonesia, and the Philippines to the consultation. [[{“type”:”media”,”view_mode”:”media_large”,”fid”:”28″,”attributes”:{“alt”:””,”class”:”media-image”,”height”:”185″,”style”:”width: 310px; height: 185px; margin: 10px; float: right;”,”typeof”:”foaf:Image”,”width”:”310″}}]]
Members of different sectors from Southeast Asia, Northeast Asia and South Asia such as farmers, rural women, NGOs, and IPs among others attended the consultation. The group was able to list down a selection of the group’s goals that are as follows:
1. To create a deeper understanding of the issues confronted in the sub-region on agricultural investments among CSOs and social movements in preparation for the 2013 rounds of consultation on the rai principles.
2. To identify strategies to effectively influence the implementation of the CFS sanctioned Voluntary Guidelines on the Governance of Land Tenure and other Natural Resources.
3. To discuss other issues identified as priority agenda by CFS for 2013 to include Climate Change and Biofuels, among others.
4. To strengthen the SEA Sub-regional CSM through clearer understanding of the CSM, its value added to on-going sub-regional CSO efforts on common agenda on food security and nutrition, and by strengthening the SEA CSM coordination structure and processes.
Deliberations made within the consultation process allowed the group to come up with a list of recommendations and action points concerning the drafting of the Voluntary Guidelines on Responsible Agricultural Investments and the Voluntary Guidelines on Land Tenure. The regional caucus also pointed out ways to forward on the engagements of the sub-region to CSM in relation to CFS. In addition, the group recommended retaining the inclusive process among CSOs/social movements/grassroots organizations in the sub-region to build sub-regional solidarity and co-operation. The group also discussed its plans for a more active participation and involvement in CSM governance, Working Groups, and also in the official process of the CSM-CFS. The group also resolved to optimize opportunities for converging with other relevant global and regional CSO processes (e.g. Development Effectiveness, CSO parallels-FAO APRC, etc.).
CSM SEA group’s upcoming activities will be convened by the PCFS co-chair Antonio Tujan, jr. as the CSM focal person for Southeast Asia starting June 2013 until May 2014.
Tags: consultation, Jakarta, NGOs, PCFS

Not just an agreement, but a just agreement needed