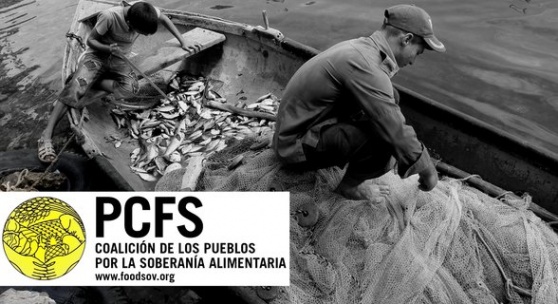 VALPARAISO, Chile—An international conference on Women on Small-Scale Fisheries was held last June 5-7 composed of delegations from Costa Rica, Brazil, Nicaragua, Peru, Honduras, Salvador, and parts of Chile. The event was organized by the National Confederation of Artisanal Fishermen of Chile (CONAPACH) to discuss issues faced by artisanal fisherfolk and the national fishing law in Chile. Other matters also included in the discussion were issues concerning the Voluntary Guidelines for Small-Scale Fisherfolk of FAO and the discrimination on women’s work in the sea. [[{“type”:”media”,”view_mode”:”media_large”,”fid”:”37″,”attributes”:{“alt”:””,”class”:”media-image”,”height”:”169″,”style”:”width: 310px; height: 169px; margin: 10px; float: right;”,”typeof”:”foaf:Image”,”width”:”310″}}]]
The said event was held parallel to efforts of the People's Coalition on Food Sovereignty (PCFS) to establish regional steering councils in the Latin American and the Caribbean regions. The first meeting of the PCFS – Latin America and the Caribbean was held on June 7 and 8 in “La Casa del Pescador” (House of the Fisherman), CONAPACH office in Valparaiso, Chile. The meeting was commenced with the participation of a number of organizations from Bolivia, Brazil, Chile, Colombia, Costa Rica, Cuba, Guatemala, El Salvador, Ecuador, Nicaragua, Peru, Venezuela and Kenya.
The said conference focused on issues of food sovereignty and how alliances from PCFS and in between member organizations can help in building alternative approaches to development. Another notable accomplishment of the PCFS meeting was the election of the Latin America and Caribbean Regional Steering Council, which is composed of eight representative organizations by sector (producers, indigenous peoples, fisherfolk, NGOs) and regions (South America, Central America, and the Caribbean).  In addition, Pedro Guzman of AgroSoldaria Colombia together with Alejandro Barrios of IBON International was designated as Co-Coordinators of PCFS in Latin America and the Caribbean.
Before the week ended, two regional consultations were held starting with the CSO Rural Sector Consultation on Development Effectiveness in Food, Agriculture and Rural Development in the Latin America and the Caribbean followed by the Sub-regional Workshop on Campaign for People’s Goals on Sustainable Development (CPGSD). Representatives from various regions and sectors pledged to disseminate and encourage other organizations from their countries to be part of the PCFS network in order to establish communication links and help strengthen national actions and regional co-operation.
Tags: Chile, fisherfolk, food sovereignty, PCFS, rural development

Southern CSOs: ‘We demand a climate fund for people and planet, not private profit’