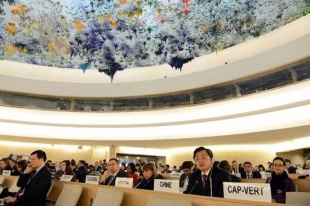 GENEVA, Switzerland–On the twentieth anniversary of the Vienna Declaration and Programme of Action, IBON International joined activists, academics, legal practitioners and UN representatives to consider progress in promoting and protecting economic and social rights.
[[{“type”:”media”,”view_mode”:”media_large”,”fid”:”20″,”attributes”:{“alt”:””,”class”:”media-image”,”height”:”206″,”style”:”width: 310px; height: 206px; margin: 10px; float: right;”,”typeof”:”foaf:Image”,”width”:”310″}}]]
The Campaign for People’s Goals was welcomed with warm regards by the participants of the event together with the founding Director of the Centre for Women’s Global Leadership, Charlotte Bunch who, during her closing speech, gave a commanding call to action in support of the Campaign for People’s Goals in the post-2015 agenda.
During the meeting, participants discussed the progress in promoting and advancing economic and social rights at the international, regional and national level, but expressed concern on the influence of the economic crisis and austerity plans on protecting and realising such rights. Many warned that economic and social entitlements are under threat in the wake of the economic crisis due to austerity packages and the reinforcement of neoliberal policies.
Participants also discussed the interdependent link between development and the concept of human rights. Part of the discussion also focused on the importance of including human rights in the development discourse.
The post-2015 agenda was a recurring theme as participants addressed whether a human rights-based approach will be adopted and how economic and social rights could be included in the Sustainable Development Goals (SDGs) given their exclusion in the Millennium Development Goals (MDGs).
Since the conference, the High level panel on Post-2015 has released their report on post-2015 and many social and economic rights have been recognised. However, there is not a consistent human rights based approach in the text and the right to development, while mentioned in name, is not addressed in substance.
The Campaign for People’s Goals for Sustainable Development (CPGSD) continues to call for a right to development to be recognised in theory as well as in practice in the new global development agenda. The Campaign also calls for a rights-based approach to development.
Tags: CPG, Geneva, People's Goals, post-2015, SDGs, Switzerland, Vienna Declaration