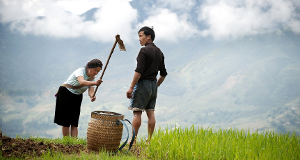 QUEZON CITY, Philippines – The People’s Coalition on Food Sovereignty (PCFS) through its Asia regional office together with 16 other local and international organizations based in the Philippines co-sponsored and organized the “People’s Solidarity Festival: Strengthening People’s Collective Actions to the Global Crisis,” last September 10 in Balay Kalinaw, University of the Philippines, Diliman, Quezon City.
Around 200 participants from Philippine-based people’s organizations, civil society organizations, the academe, and international participants from the Caribbean and Asia, among others, gathered to discuss key global issues on political, economic and liberation rights and together drew resolutions for engaging in collective actions towards moving the people’s struggles forward to address such issues.
An international situationer on the global crisis, along with reactions from the different sectors – labour, peasants, women, and NGOs – was discussed in the morning session. Mr. Antonio Tujan, Jr., director of IBON International and PCFS global co-chair, gave an overview of the current global economic crisis and how the crisis of imperialism fuels it to further oppress the peoples of the world. Key messages of his presentation cover the myth of the Asian century and rise of Africa and the protracted depression. The morning session also discussed specifically the ‘casino economy’ or ‘virtual economy’ – “a speculative and ephemeral growth that skims off extra profit from what should be the normal real value added in the production and distribution of commodities by taking advantage of the natural as well as artificial volatility of prices.”
The afternoon session was comprised of workshops from different organizations. One workshop was titled “Intensifying People’s Resistance and Responses against Global Land Grabbing,” organized by PCFS together with Kilusang Magbubukid ng Pilipinas (KMP), Asian Peasant Coalition (APC), International Fisherfolk and Fish Workers Coalition (IFWC), Our World is Not For Sale (OWINFS) and the International League of People’s Struggles (ILPS) Commission 6.
The workshop was in the form of an educational discussion on the phenomenon of land grabbing in the global south – Asia Pacific, Africa, Latin America and the Caribbean. The discussion started off with an overview of the phenomenon of global land grabbing followed by sharing of cases from Africa and Latin America presented by Ms. April Porteria, coordinator for PCFS-Asia. The Asian experience on land grabbing with special mention on the impacts of WTO on agriculture was discussed by the KMP Chairperson and former Anakpawis Party-List Representative Rafael “Ka Paeng” Mariano.
Mariano said, “The vigorous push from the World Trade Organization (WTO) and foreign monopolycapitalists to underdeveloped nations in Asia to open up their agricultural lands to foreign agribusiness corporations has given an impetus for global landgrabbing in the region.” He also added that “The landgrabbing and neo-liberal globalization policy has summarily denied and violated the peasants’ quest for genuine land reform, agrarian justice and human rights across Asia.” He also gave emphasis on the need for collective action of the people.
The last input was presented by ms. Amy Padilla of IBON International. Ms. Padilla shared the work of IBON with international engagements on agriculture and rural development issues, emphasizing that the framework used is critical engagements to expose and oppose anti-people policies and programs in the sector and forward concrete alternatives. Among the international processes mentioned are engagements with UN FAO – Committee on Fisheries (COFI), Committee on World Food Security (CFS) and the Office of the High Commissioner for HUman Rights (OHCHR). Another engagement mentioned is through Civil Society Mechanisms (CSM) which is FAO-recognized civil society organization (CSO) platform. She stressed that country struggles must be strengthened through mass movement building and that forging international solidarity relations should contribute to overall efforts to resist attacks of monopoly capital.
Mr. Tujan, who joined the latter part of the workshop, added that attention must be also given to govenrment-facilitated large-scale and acquistions which, technically speaking may not be deemed as land grabs. He stressed that the people's right to free, prior and informed consent (FPIC) must at all times be upheld and fought for in the face of these government-sponsored resource grabs.
The workshop also served as a build-up activity towards the campaigns against the World Trade Organization (WTO) that will culminate in the People's Global Camp on December 3-6 in Bali, Indonesia, which is a parallel people's activity to the 9th WTO Ministerial Meeting.
The workshop ended with the formulation of recommendations and collective people's response against global land grabbing, along with strengthening the people's movements against the neoliberal attacks of globalization in the rural sector. The workshop gave emphasis to strengthening the campaign against WTO as one of the major culprit of resource grabbing in the world. The participants also endorsed plans to conduct an international conference on land grabbing to further expose and oppose the imperialist agenda and plunder of resources.
PCFS also held a soft launching of its campaign against WTO and monopoly control of the global food system initially through its JUNK WTO! FOOD SOVEREIGNTY NOW! posters which will culminate in the People's Global Camp. ###
People's Coalition on Food Sovereignty (PCFS)
Asia Regional Office
secretariat-pcfs-asia@foodsov.org
114 Timog Avenue, Quezon City, Philippines
+63 2 927-7060-62, loc. 208
www.foodsov.org
Tags: agrarian reform, food crisis, land grabbing, NGOs, PCFS, WTO

How can civil society move together to “leave no one behind”?

September issue of IBON/RoA Country Outreach Newsletter is out