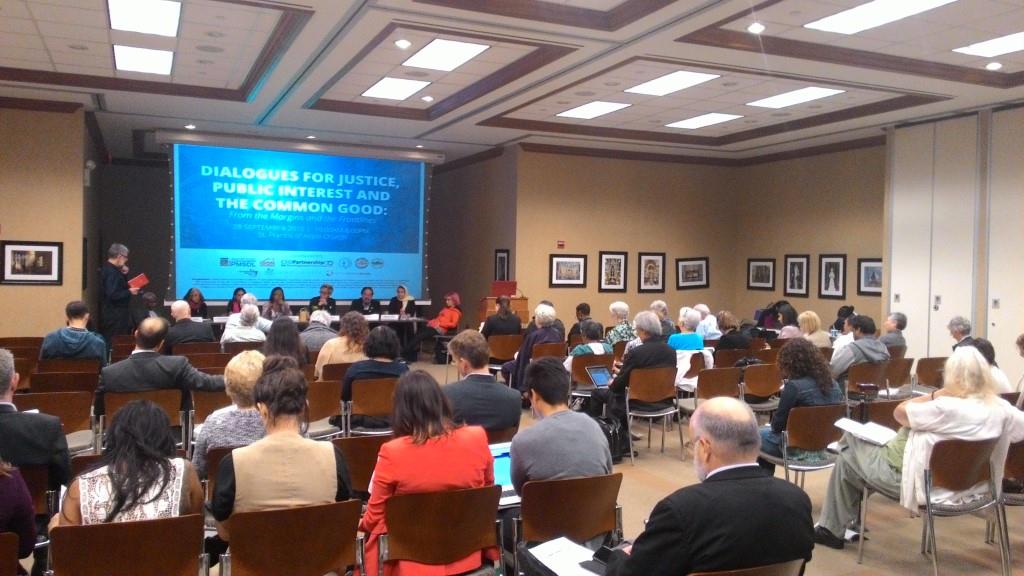 IBON International Updates #6
Sustainable Development
[[{“type”:”media”,”view_mode”:”media_large”,”fid”:”1105″,”attributes”:{“alt”:””,”class”:”media-image”,”height”:”270″,”style”:”width: 400px; height: 225px;”,”typeof”:”foaf:Image”,”width”:”480″}}]]
NEW YORK— Amidst the celebrity hype over the announcement of the United Nations’ Post-2015 Sustainable Development Goals (SDGs), including Pope Francis’ address of the UN member states, not all who travelled to New York City for the UN Development Summit were buying it.
For the Campaign for People’s Goals for Sustainable Development (CPG), a global network grassroots and civil society organizations mainly from the Global South that has been tracking the post-2015 development agenda negotiations and making regular interventions inside the halls of the UN headquarters since 2012, the UN Development Agenda continues to exclude the highest stakeholders in the development discourse– the poor.
“I received the highest number of votes from civil society to address the UN Development Summit on behalf of civil society. I was rejected,” states Eni Lestari, Chairperson of the International Migrants Alliance and a domestic worker originally from Indonesia, currently working in Hong Kong for the past 18 years.
“Why? Because I am a migrant worker. Because I am a woman. Because I come from the poor.” Lestari, a CPG spokesperson, was joined by other CPG representatives from Guatemala, Nigeria, Manipur, and the Philippines who travelled to New York City to spearhead actions and events highlighting the need for development justice, including redistributive justice.
“We have these so-called advanced nations, or the rich nations, and then you have the so-called developing nations, or the poor nations, also known as the Third World. But in reality we from the poor nations have all the natural wealth. It is the rich nations that plunder our natural wealth for their own development, not ours. This is what makes us poor. This is what pollutes the environment and causes climate change,” states CPG spokesperson AkpoBari Celestine Nkabari, also of the Ogoni Solidarity Forum in Nigeria.
“The current UN development model does not recognize this. In fact, it will make the 1% richer, the 99% poorer and will further devastate the planet.”
“We have every reason to be skeptical and critical of these SDG’s. Look at the past 15 years, starting with the announcement of the UN’s Millennium Development Goals.  While they may look good on paper, the practices of governments on the ground been more aggressive privatization and deregulation, leading to greater hardship for the world’s people and greater inequality worldwide,” states CPG spokesperson Paul Quintos, also of IBON International based in the Philippines.
“The dissonance between the rhetoric and the practice on the ground of the UN member states who negotiated the UN Development Agenda indicates the SDG’s are a Trojan horse for greater neoliberal economic policies, greater corporatization– especially with same member states aggressively negotiating binding free-trade agreements such as the Trans-Pacific Partnership, the Transatlantic Trade and Investment Partnership and the Trade in Services Agreement.”
The Campaign for People’s Goals for Sustainable Development organized days of action for justice and system change concurrent to the UN Development Summit. This included a march from Manhattan’s Washington Square Park to Herald Square of refugees and migrants demanding UN member states open the borders, stop the wars, and end forced migration as well as a day-long, post-summit conference gathering civil society, faith-based, and grassroots groups to discuss the outcomes of the UN summit, the SDG’s, and unite on action proposals. “Our work will continues as we go back to our countries. The global campaign for development justice goes on,” Lestari stated.
Reference:
Bernadette Ellorin<ateberns@gmail.com>
IBON International UPDATE UN Summit.SusDev4.pdf
Tags: CPG, New York, People's Goals, post-2015, SDGs, UN

On COP 18: Strong political commitment is urgent to save humanity