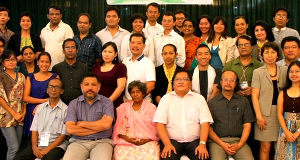 The Agenda For Change, first unveiled in 2011 and approved in May 2012, will determine European Union (EU)’s development policy in the coming years. It is an attempt to improve EU poverty reduction efforts by making its development assistance “more strategic, targeted and results-oriented”.[i] “Impact” has become a buzzword among European development officials but issues that plague European development cooperation over the years call to question whether or not the new overseas aid policy can indeed bring about real transformation in the lives of the poor in Asia & the Pacific.
EU development cooperation in principle is guided by the Lisbon Treaty, which states that the Union’s development cooperation policy shall have as its primary objective the eradication of poverty. Policy coherence for development is also an explicit obligation within the treaty.[ii] EU also underlines that human rights, democracy and rule of law are fundamental underlying principles for each development agreement, along with environmental sustainability and gender equality. It has also affirmed through the Paris, Accra and Busan agreements its commitment to the principles of ownership, mutual accountability, removal of conditionality in aid and untying of aid, and the promotion of inclusive development partnerships which means the recognition of different and complementary roles of all actors, including the recognition of CSOs as development actors in their own right.

It is important to critically examine whether the reality of EU development cooperation matches the fine image that its treaties and proclamations suggest.

Fragmentation and proliferation of the EU aid architecture

[i] As explained by EU Development Commissioner Andris Piebalgs, visit http://www.euractiv.com/development-policy/agenda-change-eu-helping-hand-ge-linksdossier-518311
[ii] Lisbon Treaty, Article 208
[iii] Making Sense of EU Development Cooperation, Aid Watch 2012 Special Report
[iv] See http://www.theguardian.com/global-development/2013/aug/27/eu-aid-targets
[v] Aid We Can – Invest More in Global Development, Aid Watch Report 2012
[vi] Aid Watch 2012 Special Report
[vii] http://ec.europa.eu/europeaid/what/development-policies/intervention-areas/trade/aid-for-trade_en.htm
[viii] European Commission Regional Programming for Asia, Strategy Document 2007-2013
[ix] The Policy Forum on Development (PFD): Asia Pacific Stakeholders’ Dialogue on European Development Cooperation was organized as follow-up to the Structured Dialogue (SD) for an Effective Partnership in Development process. Results from the SD process put forward recommendations that sounded off the need for the EU to support a regular, structured and inclusive multi-stakeholder dialogues at all governance levels in formulating its development policies. As development actors in their own right, CSOs, trade unions, local authorities, cooperatives, as well as the private sector, have a lot at stake and a lot to contribute in terms of influencing development policies. The PFD is an opportunity and a mechanism to conduct dialogues towards influencing the policies of the European Commission’s Development Cooperation in the region.

IBON Primer on G-20 now off the press!

More than a year since the pandemic: More reasons for system overhaul