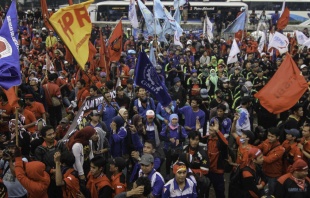 People's Global Camp Program
[[{“type”:”media”,”view_mode”:”media_large”,”fid”:”511″,”attributes”:{“alt”:””,”class”:”media-image”,”height”:”307″,”style”:”width: 350px; height: 224px; float: right;”,”typeof”:”foaf:Image”,”width”:”480″}}]]
Civil society groups, social movements and grassroots organizations are set to converge on December 3-6, 2013 for the People's Global Camp (PGC) in Ngurah Rai Sports Center, Denpasar, Bali, Indonesia—a parallel event to the 9th Ministerial Meeting of the World Trade Organization (WTO).
Organized by the Indonesian People’s Alliance (IPA) together with allied organizations, trade unions and NGOs, the PGC is set to conduct simultaneous workshops and plenary sessions as well as a global march for sovereignty and trade to serve peoples.
The said event aims to expose the neoliberal agenda of the WTO, demand governments to revoke Free Trade Agreements (FTAs), junk any prospects to sign into a new agreement with the WTO and promote meaningful exchanges between civil society and grassroots organizations.
Organizers have earlier announced that participants are expected to arrive on December 2 as part of the PGC’s preparatory work and preliminary activities. A Global People’s Parade will formally open the PGC as participants march through the streets of Bali on December 3. On December 4 to 5, participating organizations are set to host various activities and plenary sessions on themes ranging from the issues and problems of liberalization to people’s resistance and system alternatives.
The last day of the PGC will be taken up by the consolidation of reports, resolutions and recommendations presented throughout the first three days of the event. At the end of the day, the deliberation and approval of a PGC declaration will follow. To conclude the PGC, a global people’s march will be held with the objective of laying down the analysis and position of the various organizations and movements that participated in the international gathering.###
A more detailed listing and description of the program can be downloaded from the link below.
PGC_Program_Brochure.pdf
Tags: Bali, Indonesia, neoliberal globalization, people's global camp, trade liberalization, WTO

August Issue of the Institute of Political Economy Is Out Now