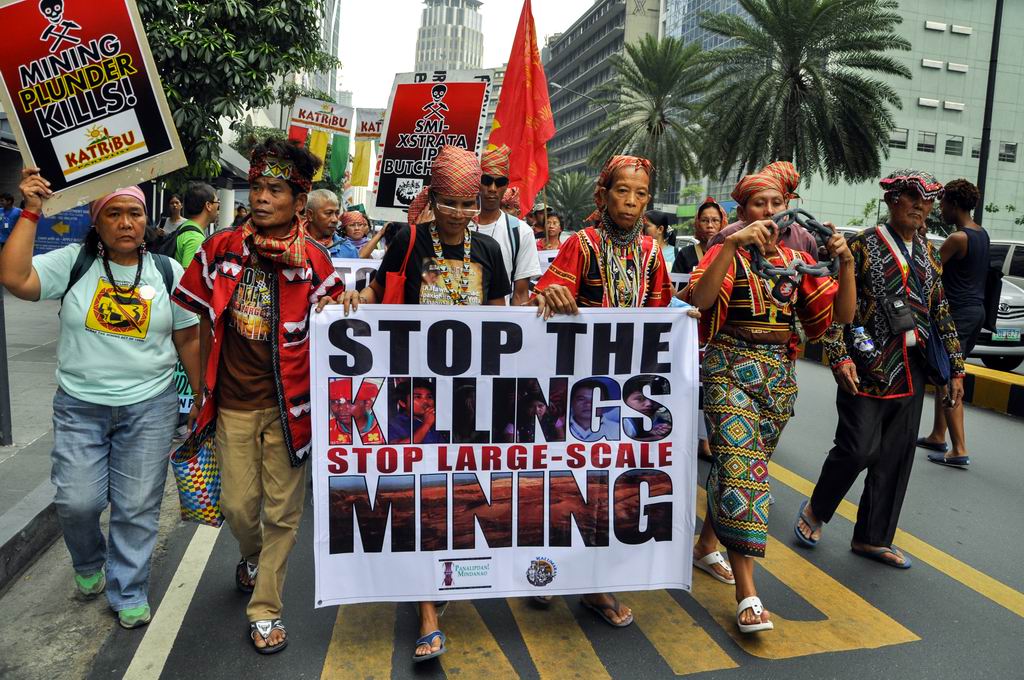 IBON International strongly denounces the killings of Emerito “Emok” Samarca, executive director of the Alternative Learning Center for Livelihood and Agricultural Development (ALCADEV), Dionel Campos, chairperson of an indigenous peoples organization in his community along with his cousin Bello Sinzo. We express our deepest condolences to their families and loved ones. We find these vile acts of murder beyond inhumane, and representative of the state of terror perpetrated by the same government forces who swore to protect its people.

On the morning of September 1st, Emerito “Emok” Samarca was found dead in the very same classroom he helped build for the Lumad children of Lianga, Surigao del Sur—his throat was slit, stab wounds in his neck and stomach, his hands and feet were tied.

Some three kilometers from the site, Dionel and Bello were strafed dead by elements of Magahat/BAGANI – a paramilitary group armed by and operating under the command of the 36th Infantry Battalion of the Philippine Army. The executions were witnessed by hundreds of residents, teachers and students of ALCADEV who were forced out of their homes and dormitories by armed militiamen.

ALCADEV is one of the many learning institutions built by the indigenous peoples themselves with the help of NGOs and faith-based groups. In addition to literacy and numeracy learning programs, these indigenous schools offer transformative and culturally relevant education that liberates students and entire communities from decades of oppression and corporate plunder of their ancestral lands. These schools serve the poorest indigenous families who, for the longest time have been deprived of their right to education and basic social services. Military attacks and other cases of harassment have been reported in hundreds of indigenous alternative schools in the region including the Mindanao Interfaith Services Foundation, Inc. (MISFI) campuses that are being supported in part through IBON International’s Adopt-a-School program.

The intensified military operations in Mindanao have left entire Lumad communities with no choice but to evacuate to the cities and leave their ancestral lands behind. Under the Aquino regime, 68 indigenous peoples have been slain. This brings to 279 the total number of documented cases of extrajudicial killings since Aquino’s presidency in 2010.[1]

These attacks are carried out under the auspices of the Aquino administration’s counter-insurgency program – Oplan Bayanihan. The implementation of Executive Order 546 has resulted in the increase of paramilitary groups and private armies under the command of the Armed Forces of the Philippines (AFP)[2]. In the same vein, since the adoption of the AFP directive 25 – an order allowing military units to conduct its operations inside schools and hospitals, attacks against indigenous schools have alarmingly increased[3].  Oplan Bayanihan is patterned after the United States Counter-Insurgency Plan (COIN)[4] in its use of civil-military and psywar operations. It serves as a legal instrument to extend the US “War on Terror” in the Philippines. In fact, the AFP has deployed a total of 55 army battalions in the region – 30 in Southern Mindanao, 11 in Caraga and 14 in Western and Northern Mindanao regions – this does not include Special Forces and US army personnel who participate in the so-called “joint military training exercises.”[5] Furthermore, US military aid to the Philippines has reached more than US$500 million since 2001[6].

ALCADEV, MISFI and other alternative indigenous schools bear the Lumad’s aspirations to break free from generations of poverty and the systematic denial of their basic right to education. The rampant militarization of local communities in Mindanao, the continued attacks against schools, and increasing deaths of indigenous leaders have not only disrupted school operations, but have also led to the outright violation of their right to self-determined development.

We call for an immediate halt to these worsening attacks and for the perpetrators to be brought before the bar of justice. We call for the revocation of EO 546 and the dismantling of all paramilitary groups in the country. Finally, we call for an end to the militarization of rural communities and schools with the pullout of government troops.

In service and solidarity with the people of Mindanao, we will carry on in defense of land and life.

STOP THE KILLINGS OF INDIGENOUS PEOPLES!

1. Conduct awareness-raising activities in your area in coordination with the Save Our Schools (SOS) Network. You can contact them thru saveourschoolsnetworknatl@gmail.com

2. We also urge our allies, partners, friends and all advocates of human rights to extend financial, material and humanitarian support to the more than 2,000 evacuees currently in Tandag City, Surigao del Sur.

3. Send letters, emails and/or fax messages calling on the Aquino administration to:

You may send your communications to:

[1] Latest figures as of September 5, 2015 based on data from Karapatan Alliance for Peoples’ Rights

Save the Date: Peoples Demands for Paris and Beyond – 28 September 2015

Stop RCEP, WTO, all other neoliberal trade negotiations amidst the COVID-19 pandemic