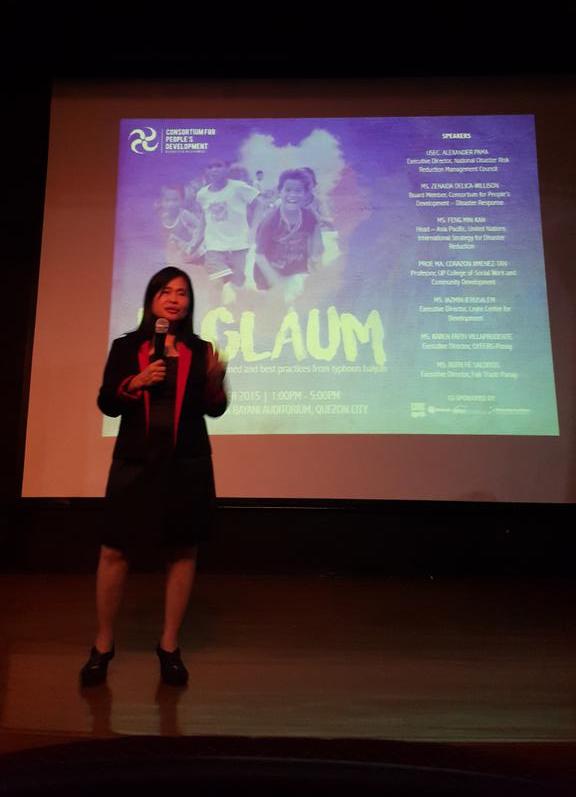 Consortium for People's Development – Disaster Response
Press Release
November 5, 2015
[[{“type”:”media”,”view_mode”:”media_large”,”fid”:”1147″,”attributes”:{“alt”:””,”class”:”media-image”,”height”:”480″,”style”:”width: 253px; height: 350px; margin: 5px; float: right;”,”typeof”:”foaf:Image”,”width”:”347″}}]]
As the country commemorates the second anniversary of supertyphoon Yolanda (international name: Haiyan), a network of NGOs challenged presidential candidates to present their own disaster response agenda.
Zenaida Delica-Willison, an expert on disaster response and a board member of the Consortium for People's Development-Disaster Response (CPD-DR) said, “While we remember Haiyan, we must not forget the bigger picture. Haiyan will occur again if we do not address the underlying vulnerabilities of the people.”
Delica-Willison noted that after Haiyan, many international NGOs provided emergency response to the communities affected. “It was really amazing that all international NGOs were here but the other question on my head is, ‘Why are they here? Are we not capable?’”
Delica-Willison had worked with various international NGOs such as the United Nations Development Programme. She is the founder of Center for Disaster Preparedness and served as the director of the training and education at the Asian Disaster Preparedness Center.
Delica-Willison said that while the government focused most of the activities in emergency response and managing disasters, the most important part is preventing hazards to become disasters. “Our political leaders must understand that disasters are a matter of vulnerabilities,” Delica-Willison said.
“If we spend more in mitigating disasters, the response side will be less,” Delica-Willison said.
Delica-Willison said that candidates, from the presidentiables down to the candidates in the local levels, must have a clear program for disaster risk reduction and resiliency building.
Suyin Jamoralin, CPD-DR chairperson, noted that five years after the passage of the Disaster Risk Reduction and Management Act of 2010, many of its key provisions are not implemented.
Jamoralin said that in many barangays, the Barangay Disaster Risk Reduction and Management Committees  are not functioning.
“We need to empower communities. This is the most important lesson we have learned from many years of development work,” Jamoralin said.
The CPD-DR promotes community-based disaster risk management (CBDRM). It is composed of the Citizen’s Disaster Response Center (CDRC), Management Advancement Systems Association Inc. (MASAI), Working for Empowerment and Good Governance Institute, Inc. (WeGovern Institute) and IBON International.
The consortium members provided relief, direct rehabilitation initiatives and disaster risk reduction trainings in Yolanda-affected communities in Eastern Samar, Leyte, Panay, Mindoro and Palawan. #
Contact number: 0915-3870540 | coordinator@cpddr.org
Tags: CPDDR, disaster, Haiyan, press release, typhoon, Yolanda