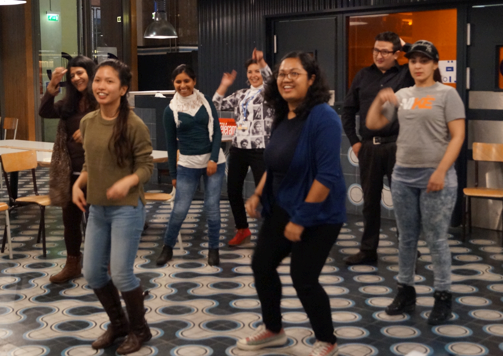 PARIS, 7 December, 2015–Women activists, grassroots leaders, and advocates danced the One Billion Rising at the Climate Action Zone in Paris during the COP21 to demand governments to set emission cut targets that will hold global warming under 1.5 degrees Celsius and provide reparations for the climate debt incurred by developed counties because of their unsustainable consumption and production practices.

According to Maitet Ledesma of the International Women’s Alliance (IWA), “women, especially those from marginalized groups and grassroots communities, bear the disproportionate brunt of the injustices of climate change. Women dancing the One Billion Rising creatively expresses their defiance and resistance to the oppressions levied on them as frontline communities most impacted by climate change and their demand for climate justice.” IWA is a member of the Global People’s Surge, an alliance of peoples movements and grassroots frontline communities that calls for system change in the current climate debates.

Women, are excluded from decision-making circles, and often lack access and control to natural resources, which negatively affects their ability to adapt to changing climate. Women are more severely affected and are more at risk from the impacts of climate change. According the Global Women’s Project[1], women are 14 times more likely to die of natural disasters due to entrenched gender inequalities.  If they survive, they face rape, trafficking, and other types of violence during the aftermath of disasters.

Ledesma said, “We need system change. We need to dismantle the existing production and consumption system that exploits the environment, violates women’s rights, and allows the concentration of obscene wealth in the hands of the 1 percent.”