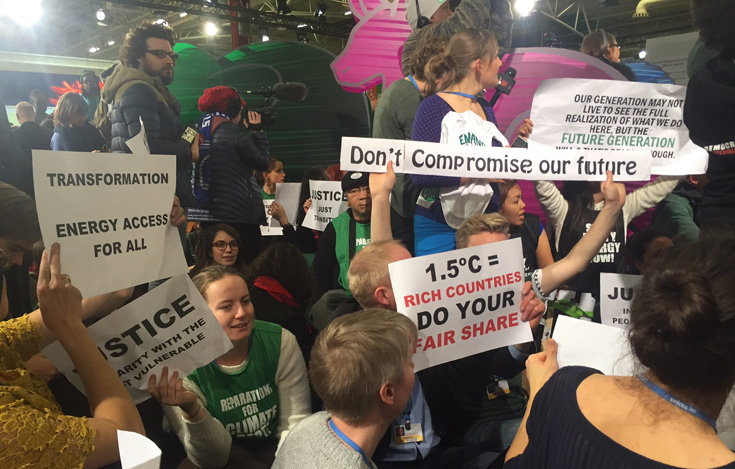 (Paris, France, December 10, 2015) – The Paris Climate Summit, happening from 30 November to 11 December, is due to conclude a new international agreement to limit global average temperature rise and avoid the most dangerous consequences of climate change.

After almost two weeks of intense debates on issues around the level of ambition and commitment to finance climate action, a ‘clean text’ of the draft agreement was released yesterday afternoon. The much-anticipated draft Paris outcome was all of twenty-nine pages, and peppered with text in ‘brackets’ – to indicate where there is divergence, as well as ‘options’ – where there are different proposals that negotiators may agree on.

Negotiations went on for more than 10 hours through the night (because an agreement is aimed to be arrived at in time for the Dec. 11 closing of the Summit, but it is evident that sharp fault lines that divide Parties remain.

Observers, including civil society, who have been kept out of this process, have been raising red flags all throughout these two weeks, and yesterday staged a 500+ strong action outside the plenary halls to issue a final warning to the negotiators. This draft outcome, even before it is finally agreed on (if it does get agreed on), faces the serious risk of being illegitimate and immoral on a number of counts.

It undermines the very principles with which the United Nations Framework Convention on Climate Change (UNFCCC) was founded. Common but differentiated responsibility and respective capabilities (CBDR-RC) lies at the heart of the Convention, and it means all 192 Parties that adopted the Kyoto Protocol 1997 subscribe to this guiding principle for reducing greenhouse gas emissions that cause climate change. The Convention also spells out that developed countries have a responsibility to provide financing, technology and capacity development to those countries that have contributed the least to, and yet are facing the worst impacts of the climate crisis. The two largest historical polluters, the United States did not ratify this, while Canada withdrew in 2011.

It trumps other international agreements that many governments, including developed countries, have signed on to. Human rights, indigenous people’s rights, gender rights– these are but few of internationally recognized rights won through decades of struggle that have been the subject of horse trading in this negotiation. The inclusion of the recognition of these rights in the draft Paris agreement is even being used as a ‘trade- off’ for keeping the language on CBDR.

However, given the gravity of the climate crisis and the urgency of ensuring the survival of people and planet, it becomes even more important to raise the issue of the immorality of the imminent Paris agreement.

The much-debated temperature limit goal of 2 degrees C is not enough to stave off runaway climate change. And even the 1.5 degrees C target (to which developed countries have been singing in chorus with ‘vulnerable’ countries but without actually putting in the necessary mechanisms to make this achievable), is not enough to what is required by scientific warnings. Even a 1.5C temperature rise would be disastrous, if not catastrophic, for those communities already drowning.

The current system of countries putting in their Intended Nationally Determined Contributions (INDCS, or pledges to the global ‘pot’ of pledged actions to lower emissions and address communities already impacted) will be voluntary and on a ‘best effort’ basis. Instead countries and governments should commit now to an emissions reduction target based on their per capita emission based on fair share principle.

There are many other arguments why the impending agreement runs the risk of immorality when measured against the peoples’ demands as well as the imperatives of science:

The clock is ticking, but what is needed now is not just an agreement. The world is watching, and demands a just agreement. This is the strong message sent by people’s organizations, social movements and civil society – both inside the halls of the COP and outside the walls of fortress Paris. #

A Burial Ground for the Doha Development Round