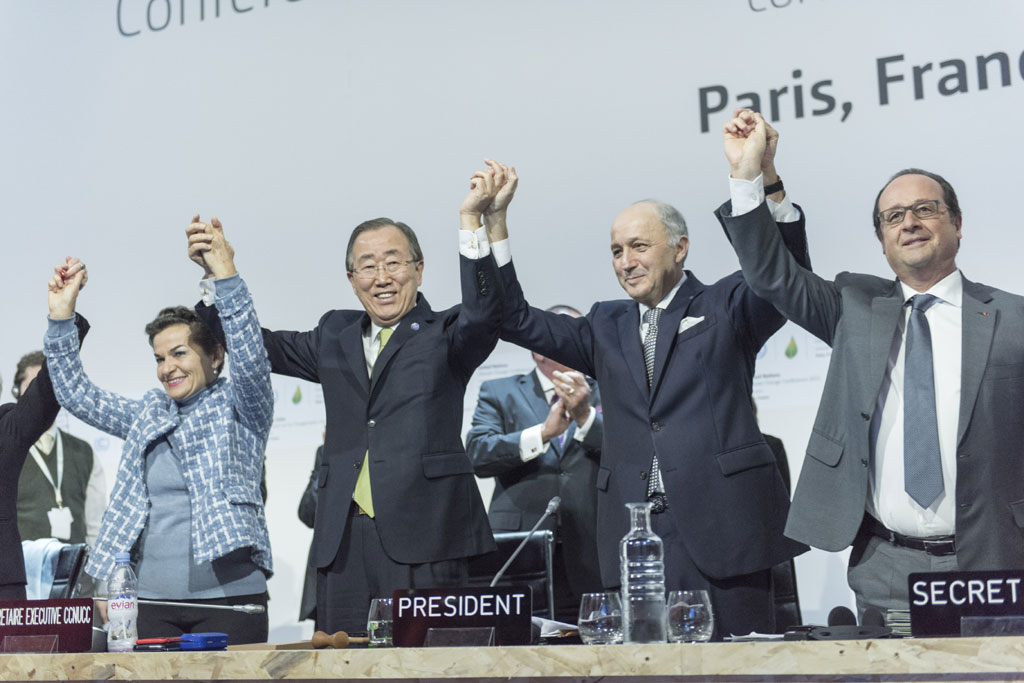 (Paris, December 13th, 2015) – The 21st Conference of Parties (COP21) of the United Nations Framework Convention on Climate Change (UNFCCC) concluded its meeting on December 12th, a day behind the original schedule of finalizing an agreement on global efforts to respond to the growing impacts of climate change.

The Panel of the Durban Platform for Enhanced Action (ADP), the body responsible for coming up with a proposal for a new "protocol, agreement or legal instrument" to replace the Kyoto Protocol, has done its job, amid great jubilation and self-congratulations from almost every state, with the moment described as "a turning point for humanity and a message of light". But what does having an agreement among states mean? Will it really solve the problem of climate change? How will it affect people, especially those in the frontlines already facing the most severe impacts of global warming?

To answer these questions, there is a need to look at the Paris Agreement in close perspective.

First, the Paris Agreement contains no binding effect on States. US President Barack Obama’s statement at the COP opening session was eventually reflected in the outcome, i.e.  "the objectives of (climate action) must be established by each country, taking into account differences that face every nation", which is a first clear sign of negating the historical responsibility especially of rich industrialized countries that have led to this crisis. Under the Paris Agreement, countries’ level of greenhouse gas emissions reductions is subject to national contributions (INDC) and although they should be regularly updated, these will not be mandatory.

Second, there is lack of ambition in terms of a clear and sufficient long-term goal. Despite the disputes to establish consonance on a 1.5°C increase in global mean temperature, the actions proposed by countries would in reality lead to a temperature increase about 3.2°C to 3.7°C. This is catastrophic, especially for those countries, communities as well as flora and fauna in low-lying areas.

Third, there is no new or additional financing. Finance was still the big struggle between the countries, with the rich countries saying less developed economies must foot the bill for climate action on an equal basis. The much-ballyhooed USD100 billion annually until 2020 in pledged (not committed and actually disbursed) climate financing still remains, and emerging economies would contribute to this on a voluntary basis. The Paris Agreement also does not provide any commitments for funding after 2020.

Fourth, mitigation commitments by rich countries are inadequate, and will not add up to what is needed to keep the world safe. The world’s largest and historical emitters have achieved their agenda of minimizing their differentiated responsibility (fair share). The principle of “differentiation” between developed and developing nations was substantially diluted. The phrase 'historical responsibility' has been erased from the Agreement and this weakens the obligations of developed countries to take actions for their past emissions. The developed countries were understandably happy with the correction, but developing nations had lost one big battle.

Fifth, there was not an established effective mechanism to compensate for the "loss and damage" of countries and communities already hit by climate change. While there is reference to ‘loss and damage’ in the outcome document, this is rendered ineffective since countries cannot claim or ever expect to receive compensation either from catastrophic phenomena or from economic dislocations due to climate change impacts spread over time.

Sixth, the only real winners at COP21 are transnational corporations (TNCs) and international financial institutions (IFIs) which are making even more business than usual by turning the climate crisis into 'their best chance for profit'. Unilever president Paul Polman said this climate accord "would free billions of dollars and immense creativity and innovation of the private sector" to address climate change.

Seventh, the Agreement opens the door (even more so than the Kyoto Protocol) to financial speculation and carbon markets, so that any country can engage in trading and purchase carbon bonds. Projects and other initiatives or policies that supposedly reduce emissions, but often negatively impact the environment and violate the rights of local communities, can now thrive even more freely. Through this, transnational corporations from industrialized countries, often working with corrupt governments in the South, continue with their pollutive ways – as long as they can pay for it by ‘investing’ in developing countries. In essence, they buy their way out of their responsibility to transition to more sustainable production systems.

Eighth, false solutions to climate change were given renewed international support. These false solutions, based on large hydro and nuclear mega-energies, agribusiness and plantations, geo-engineering and carbon-offset mechanisms, were confirmed in the Agreement.

Ninth, there is no justice for women in the Paris Agreement. Those least responsible for climate change, particularly women in the most affected countries of the global south, will continue to pay the highest price.

Tenth, human rights and indigenous people’s rights were easily bargained in the past week. Although these have been won and recognized through decades of struggle, references to these rights have been relegated to the Preamble, supposedly as a guiding principle, but lost in the actual substance of the Agreement.

Finally, the Paris agreement does not address the root causes of climate change. It is clear it is not possible to address climate change meaningfully without addressing the over-consumption and entrenched political power of the world’s richest 1%. And so after 21 years of climate summits, GHG emissions have increased by 50% and the world continues to breach its planetary boundaries.

Measured against the imperatives of science and equity, the Paris Agreement is a tragedy for the world’s poorest and most vulnerable people. This much is clear.

But Paris has also brought out the strong resolve of the people to stand up, speak out and take action..  Attempts to suppress dissent were no match to the thousands who bravely defied the state of emergency imposed by the French government.

Throughout the two weeks of the climate summit, whether inside the halls of the COP or outside in the streets of Paris, people converged to send their strong messages of climate justice and the need for system change creatively and determinedly. On December 11th, hundreds of civil society observers at the climate summit staged a ‘red lines’ action to urge global leaders to uphold people’s interests in the negotiations. The following day, more than 10,000 people converged at the Arc d’ Triomphe and at the foot of the historic Eiffel Tower in downtown Paris to declare a ‘climate state of emergency’ and to denounce the Paris Agreement as unacceptable and immoral.

And the signs in that cloudy Parisian afternoon were never as clear as before: another world is possible, and that the people will carry forth the struggle for climate justice and genuine system change. #

WTO Nairobi Ministerial: Deathbed of the Doha Round?

Resistance needs no permit: COP 21 opens with climate marches all over the world and the arrest of around 200 in Paris

BAPA+40 ends with no commitments, without heeding civil society