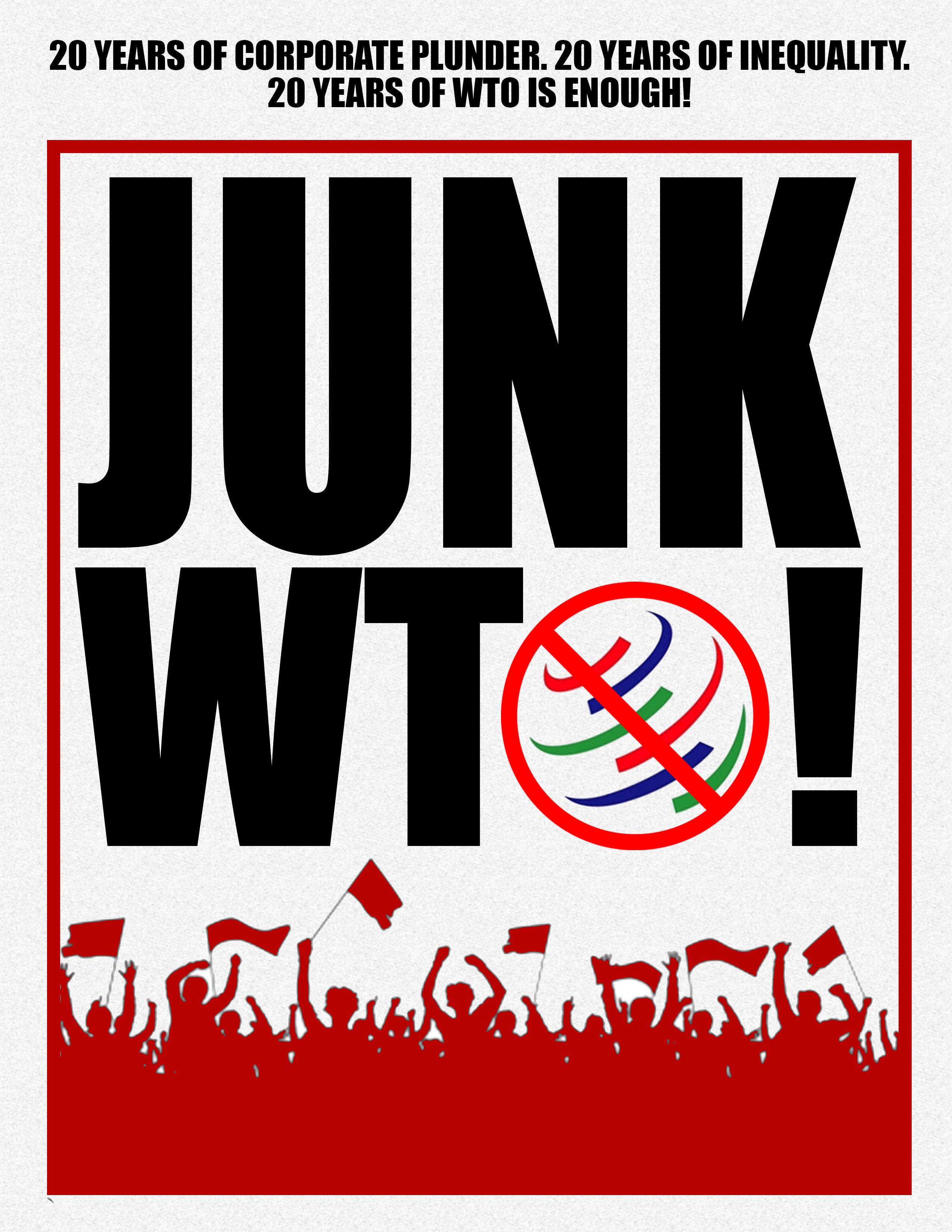 No solution in sight from a system that breeds the world’s problems, warns global activists a day ahead of the 10th Ministerial Conference of the World Trade Organization (WTO) in Nairobi, Kenya.

14 DECEMBER – A day before the official opening of the World Trade Organization’s (WTO) 10th Ministerial Conference in Nairobi, global activists urged developing countries to stop expecting solutions from the WTO as negotiations face another impasse after the US, EU, Canada and Australia blocked any ‘permanent solution’ to reach a deal on public stockholding programmes for food security.

“Achieving a genuine food security deal will not be possible within the WTO. You can’t expect solutions from a system that breeds the world’s problems,” said Antonio Tujan Jr.,IBON International Executive Director based in the Philippines.

Wali Haider of the Roots for Equity, Pakistan called attention to the fact that “In the last 20 years, 300,000 Indian farmers have ended their lives because of WTO impositions that destroyed their only source of livelihood. This is happening in many parts of the world.”

“What is cruel here is that developed countries pour billions of dollars to subsidize their products while legally prohibiting poor nations from supporting their own domestic producers as in the case of many African countries,” said Doris Asembo of SEATINI based in Kenya.

During the 2013 Bali Ministerial, a temporary public stockholding agreement was hammered out between the US and India with a view to seek a permanent solution come the Nairobi Ministerial happening on the 15thof December. Public stockholding programmes allow developing countries to provide much-needed subsidy for domestic agricultural products. The Bali deal temporarily shielded India from being challenged legally for supporting its domestic agricultural sector beyond agreed limits.

Last year, developing nations including India, Indonesia, China, Kenya, and Egypt among others presented a detailed package that would allow public stockholding programmes for food security.

The proposal was later on stonewalled by the US, EU, and Australia drawing more pessimism from developing countries that no substantial outcome addressing issues of the Global South would be achieved at the Nairobi Ministerial.

“This illustrates the fundamental injustice of the WTO – benefiting rich nations and their corporations at the expense of people’s rights and welfare,” remarked Professor Edward Oyugi, Executive Director of the Social Democratic Network and a member of Kenya’s National Economic and Social Council (NESC).

Gacheke Gachihi of Bunge La Mwananchi said, “After 20 years, the people are fed up with the false promises of the WTO.  We must make trade work for ordinary people, not for corporations and the rich.”

“The only ‘permanent solution’ in sight is to Junk the WTO and promote international economic cooperation based on solidarity and complementarity, not market competition,” Tujan concluded.

A Peoples Forum on the WTO will be held on Tuesday, Dec. 15, 9am-1pm at the Professional Center, Parliament Road, Nairobi with social justice activists and advocates from over 10 countries in attendance. This will be followed by a Peoples Procession at 2:30 pm from the Parliament Road to the KICC where the 10th Ministerial Conference of the WTO is opening on the same day.