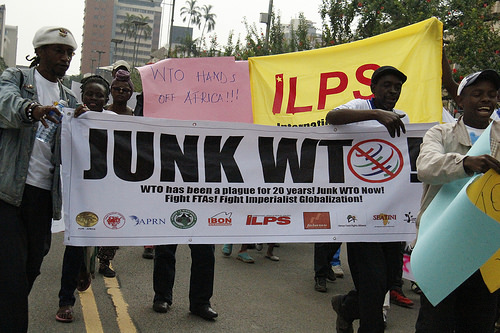 15 DECEMBER – On the opening day of the 10th Ministerial Conference (MC10) of the World Trade Organization (WTO) in Nairobi, global activists welcomed trade ministers from over 100 countries with a protest.  Some 200 activists from 12 countries joined grassroots organizations in Nairobi, Kenya to protest 20 years of the WTO’s broken development promises.  Simultaneous actions were held in the Philippines, Indonesia, Pakistan and other countries spearheaded by the Asian Peasant Coalition and the International League of Peoples Struggles.

Gacheke Gachihi of Bunge La Mwananchi (Parliament of the People) said, “20 years of WTO have been 20 years of opening up the world to transnational corporate plunder while billions of people languish in poverty, hunger, unemployment, and environmental catastrophes.”

Wali Haider from the Asian Peasant Coalition said, “The WTO is not about free trade or development. It allows wealthy industrialized countries to heavily subsidize their agribusinesses and dump their produce in other countries. Small farmers in poorer countries who are unable to compete are buried in debt and often end up dispossessed of their land and livelihoods.  At the same time WTO rules prevent countries from adopting measures to guarantee food security and maintain decent family farmer incomes.”

Antonio Tujan from IBON International, a think-tank working with social movements in developing countries, explained that WTO rules put the “rights” of corporations to profit over human and labor rights. “WTO rules open up countries to foreign investment and thereby making it easier for capital to go where the labor is cheapest and most easily exploited, and where social and environmental regulations are weakest.  The WTO encourages a ‘race to the bottom’ in wages by pitting workers against each other rather than promoting internationally recognized labor standards.”

Leonida Odongo of Fahamu, a network of movements for social justice in Africa, warned that,“The 10th WTO Ministerial in Nairobi is set to perpetuate the same neoliberal free trade agenda, and more! Developed countries led by the USwant to include‘new issues’in negotiations that include proposals to further open up public services and procurement to foreign investors, strengthen protections for foreign investments, tighten intellectual property rights of corporations while restricting the ability of governments to regulate corporate activity for the public interest.“

Protesters marched in front of the Kenyatta International Conference Centre as Ministers filed in for the opening of the MC10, chanting “20 years of the WTO is enough!  No to WTO Expansion, No to new issues in the WTO!”  They held banners calling for “Junk WTO!” #