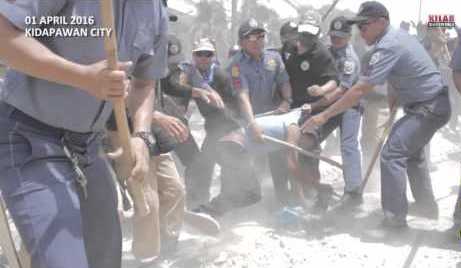 IBON International statement on the Kidapawan Massacre
April 2016
[[{“type”:”media”,”view_mode”:”media_large”,”fid”:”1442″,”attributes”:{“alt”:””,”class”:”media-image”,”height”:”268″,”style”:”width: 350px; height: 203px;”,”typeof”:”foaf:Image”,”width”:”461″}}]]
IBON International condemns in the strongest terms the violent repression in Kidapawan undertaken by the Philippine National Police (PNP) in response to the occupation by 6,000 unarmed peasants and Lumad tribe-members of the Kidapawan highway to demand food aid and immediate relief from drought for the six (6) El Niño-stricken municipalities of which they are residents. The attack reportedly resulted in at least two (2) deaths and over a hundred injured, while some 89 (including women, elderly and six minors) are counted among those still missing.
The peasants and Lumad had been in negotiations with the provincial Gov. Lala Talino-Mendoza, who responded to the demand with an offer of 3 kilos per person, which would have been provided every three months. For many of the protestors, the meager offer seemed to belie the government’s claim to have stored sufficient rice for calamities in government agencies such as the Department of Social Welfare and Development (DSWD). In the midst of the El Niño drought and the resulting hunger that has spread through the North Cotabato communities, not a single bag of rice had been released.
While some have been arrested, around 4,500 of the protestors were trapped at the Methodist Church where they sought sanctuary, and state forces continue to refuse them safe passage back to their homes.
IBON International calls for the immediate release of all protestors and the pullout of the police and military forces present at the location. It should be recognized that, under Philippine law, it is illegal for law enforcement to carry arms within a 100-meter radius of a public protest, and it is just as illegal to open fire upon the protestors.
It is, however, unnecessary to turn to the law to understand the great injustice evident in responding with state violence to residents who more appropriately require humanitarian intervention. It must be remembered that the region was already considered to be in a state of calamity as early as last year, so such intervention is long overdue, and any attempts to further forestall the release of the calamity funds and the sacks of rice promised to the residents as assistance should be recognized as the acts of criminal cruelty.
Accordingly, IBON International calls for a thorough and independent probing of the incident, and for Gov. Talino-Mendoza, the local government units (LGUs), the PNP, and the current administration to be held accountable to the extent each are liable for the killings and other human rights violations.
The state violence deployed against the peasants and indigenous community in Kidapawan, as well as deplorable living conditions, must be understood as symptoms of larger social problems in evidence throughout Asia.
Three days before the incident in Kidapawan, in fact, 700 marching farmers in the Central Sulawesi of Indonesia drew rubber-bullet fire from police and military forces. The result was 14 injuries, 103 arrests. The farmers had been marching to the provincial capital to participate in the “Day of the Landless,” a global day of action organized with the initiative of the Asian Peasant Coalition (APC), which was intended simply as a freedom-of-speech event for the voicing of hardships and grievances shared by the peasant community especially throughout the region.
The region of Asia is home to approximately 55% of the world population, and of this, 58% depends on agriculture for livelihood. However, it has only 23% of the world’s total land area. Geographical, political and economic forces and policies, such as those promoted by institutions like the IMF, World Bank and WTO to relax foreign restrictions on land ownership, have contributed to a situation in which both local and multinational land-grabs, carried out through both legal and extra-legal means, among other factors, continue to lead to the displacement and/or impoverishment of peasants and small-scale farmers. Efforts to confront such social problems with state violence can only add to the already staggering amount of suffering.
We urge the international community to join the Global Day of Action on April 8 by holding solidarity gatherings and actions to call for immediate relief for the Kidapawan farmers and their families, justice for the victims, and accountability of the Aquino government.
Endorsed by:
IBON International Statement on the Kidapawan Massacre.pdf
II Statement on Kidapawan_final_ES.pdf
II Statement on Kidapawan_final_FR.pdf
Tags: IBON International, Kidapawan, statement, violence

The Addis Action Agenda: An Agenda without Action?

Solidarity with the Afghan people, end the US “War on Terror” and war machine