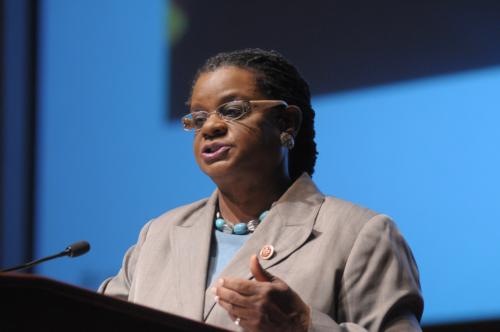 US Congressional Representative Gwen Moore, a Ranking Member of the House subcommittee tasked with World Bank Group (WBG) oversight, yesterday issued a rare letter of condemnation of the WBG for its failure to prevent conflicts of interest from shaping the decisions of its development finance institution, the International Finance Corporation (IFC), in its projects in the water sector. Moore called for the WBG to cease funding and promoting water privatization projects pending independent review and congressional hearings.

“As a strong believer in the mission of the World Bank,” said Moore in her letter addressed to World Bank President Dr. Jim Young Kim,“I have become increasingly concerned that its role as advisor and investor in the MWC [Manila Water Company] deal may now be creating reputational risk for the WBG.”

The condemnation by Rep. Moore comes at a time when privatization projects and public-private partnerships (PPPs) such as the Manila water concession have faced increasing opposition from communities and civil society organizations around the world for reasons including, among other things, management decisions by concessionaires that have tended to increase profit while decreasing accessibility.

In her letter, Rep. Moore in part traces the roots of these conflicts of interest back to a 1961 amendment to the IFC’s Articles of Agreement deregulating equity investments, which the institution was previously prohibited from making.

The IFC’s equity stake in the MWC is one of the reasons why its facilitation of the Manila water privatization project has been so controversial.

As Rep. Moore details in her letter, the IFC advised the Philippine government to contract two corporations to run the city’s water system, which it did in 1997, contracting both MWC and Maynilad. The IFC then invested only in the MWC[i] and the IFC-brokered agreement[ii] seemingly favored MWC, which assumed only 10 percent of the pre-existing utility’s debt and inherited the service area with better existing infrastructure.

Writes Rep. Moore, “As part-owner of MWC, the IFC is now aligned with MWC and its aggressive pursuit of arbitration to charge utility rates that support levels of compensation exceeding the maximum 12 percent rate of return legal for Philippine utilities.”

According to Corporate Accountability International’s calculations, the IFC has made $43 million from its initial investment.

While the IFC now claims to mitigate these conflicts with a “Chinese Wall”[vi] between its advisory and investment arms, recent restructuring within the IFC contradicts these claims. In fact, the IFC has recently boasted publicly about its efforts to integrate these two arms.[vii]

Meanwhile, both MWC and Maynilad have implemented further rate hikes effective this month, despite public opposition joined by a variety of figures including Philippine senatorial candidate Rep. Neri Colmenares, who urged the Supreme Court (SC) to “side with consumers” by issuing a temporary restraining order (TRO) against the increases as well as sovereign guarantees.[viii] Such guarantees involve commitments made by the government to private concessionaires. In the cases of MWC and Maynilad, these have included commitments to subsidize shortfalls in the government-promised rate of return, related rate adjustments, and perks including tax incentives.

Antonio Tujan Jr., Director of Manila-based IBON International, commented: “The World Bank has been the most prominent proponent of the privatization of urban water services in poor countries for the past 15-20 years. And it’s joined by a strong corporate lobby that wants to continue to replicate privatization disasters like the one in Manila because of their profitability.”

Rep. Moore criticized the IFC’s promotion[ix] of this “Manila model” as a flagship to be emulated around the world, including in Africa, where it has led to IFC advisory contracts in Benin[x] and Mozambique[xi] and informed a widely-opposed privatization scheme in Lagos, Nigeria.[xii]

Due to the growing opposition to privatization projects including PPPs, implementation of such projects have become politically difficult to pursue.

Recently, the World Bank abandoned its multimillion-dollar effort[xiii] to secure a water treatment PPP in Lagos, Nigeria. This reversal came after a year of protests from civil society and labor groups, including a summit in Lagos last August that was expected to chart the course for the city’s public water[xiv] management.

In India, unions and civil society groups also recently concluded a series of mobilizations[xv] aimed at preventing PPPs from spreading across the country as part of the Prime Minister Narendra Modi’s urban development initiatives.[xvi]###