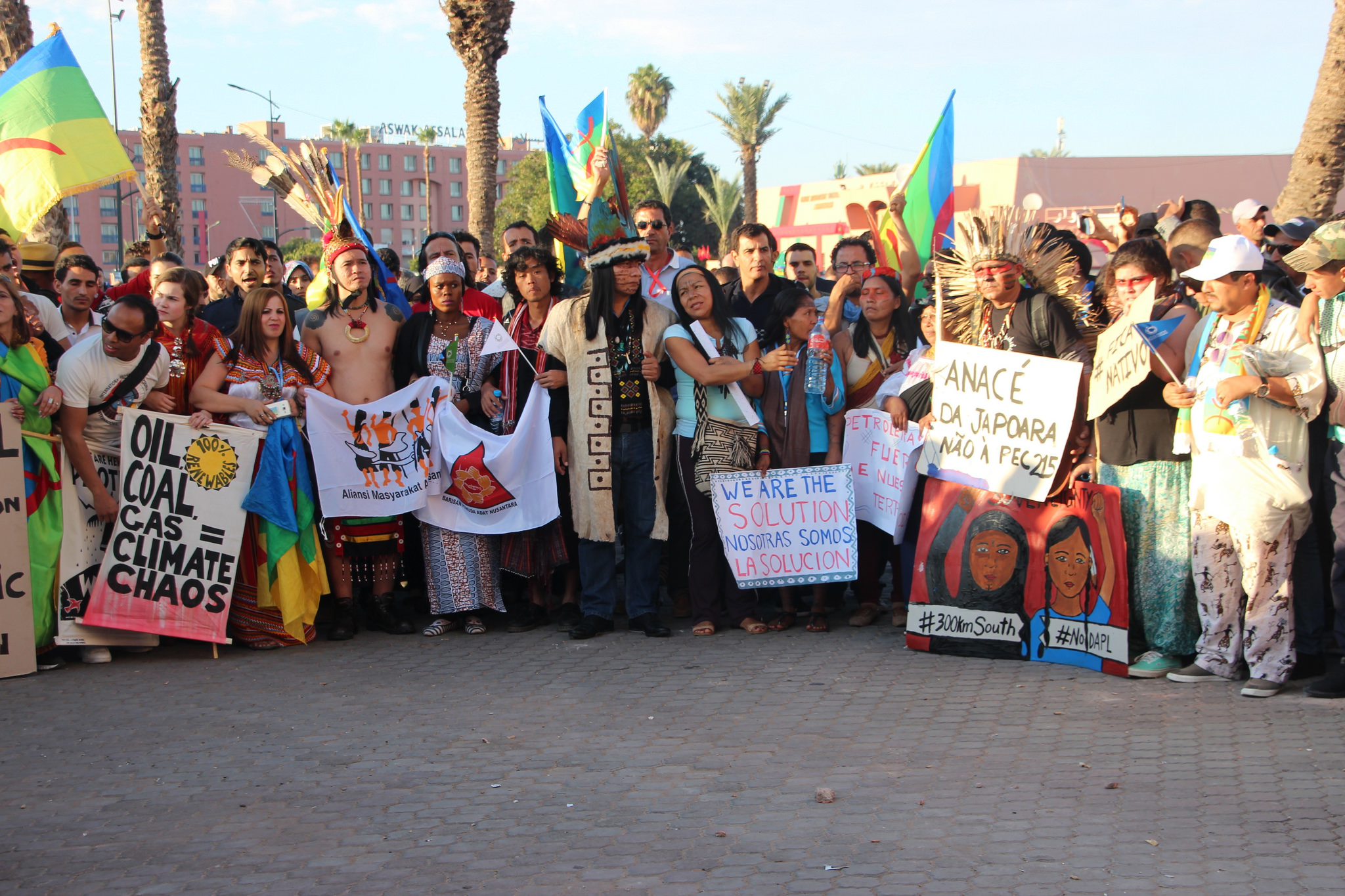 Photo courtesy of Takver is licensed under Creative Commons BY 2.0

(Marrakesh, Nov. 14,2016) – An estimated 7,000 people took to the streets of Morocco on Sunday, calling for meaningful action from the world’s leaders to solve the climate crisis. Representatives of indigenous peoples, rural communities, workers, youth, women, and others from local and international organizations participated in Sunday’s action,which was one, if not the first, of the largest public gatherings on climate in the Kingdom, host of the 22nd meeting of the Conference of Parties of the United Nations Conference on Climate Change (UNFCCC COP 22). As the annual climate summit enters week 2 of negotiations, this gathering of people calling for climate justice is becoming ever more important in the wake of rather discomfiting developments.

As heads of states and ministers from about 196 countries fly in to Morocco for the high-level segment of the talks, week 1 ended still with disagreements over how the Paris Agreement will be operationalized and how its provisions apply to developed and developing countries. Among the more heated debates were on developed countries’ insistence on advancing discussions on greenhouse gas emissions (mitigation) while glossing over adaptation (actions to cope with the impacts of climate change) and financing – which are obviously more urgent concerns for developing countries.

A draft document titled  ‘Marrakech Call for Climate Action and Sustainable Development’ dated November 9th was given out by the Moroccan COP Presidency to some country delegations as the sessions were ending on Friday, November 11th. While not having been made available to the public eye yet, the ‘Marrakech Call’ urged leaders and ministers to adopt the document without going through the formal negotiations.This was not received well by developing country negotiators not only due to lack of transparency and inclusiveness (a call repeatedly stressed throughout the week) but also because the document effectivelyunderminedthe demands of developing country members as well as the principles thatUNFCCC was founded on. ‘Common but differentiated responsibilities and respective capabilities’ is a bedrock in the international climate regime, and means that all states must take collective responsibility for the environment, but their contributions will differ based on their varying levels of development.[2] Described as a ‘laundry list of developed countries’, oncethe draft document is adopted, this would guide how the Paris Agreement will be understood and implemented, in turn furtherset back the already insufficient ambition embodied in the Paris Agreement.[3]

Evidence from the new report: Setting the Path towards 1.5°C: A Civil Society Equity Review of pre-2020 Ambition[4] argues that the aspirational temperature limit of 1.5 degrees Celsius can only be met if governments take action in the next four years to speed up the pace of cutting emissions. The report also shows that developed countries including the US, EU and Japan are offering disproportionately lower levels of reduction targets compared to their level of development and historical emissions.

In addition, despite its ratification of the Paris Agreement, the US military remains one of the largest CO2 emitters and consumers of petroleum products in the world. In 2014 alone, the US military-industrial complex emitted more than 70 million metric tons of CO2.This figure doesnot yet include emissions from hundreds of overseas military bases. And even now under PA that the blanket exemption ofUS military’s GHG emissions from national emissions reports has been lifted, reporting remains voluntary.[5]

Developed countries evading responsibility for taking the lead in climate action certainly does not bode well for people and planet.  ###

[1]Kasbah is a type of medina or fortress (citadel)