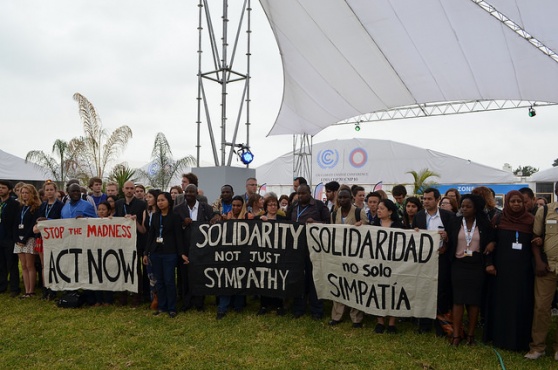 Full Text:
IBON INTERNATIONAL UPDATE NO. 6
Climate COP, 8 Dec 2014, Lima, Peru
[[{“type”:”media”,”view_mode”:”media_large”,”fid”:”431″,”attributes”:{“alt”:””,”class”:”media-image”,”height”:”318″,”style”:”text-align: center; width: 350px; height: 232px; float: right;”,”typeof”:”foaf:Image”,”width”:”480″}}]]
Day 1 of the second week of the international climate change negotiations in Lima saw heightened sentiments and responses from the different actors at this meeting.
Ministers attending the United Nations Framework Convention on Climate Change 20th Conference of Parties (UNFCCC COP 20) hope to come out with a draft negotiation text in Lima that will be carried through and concluded in Paris next year. Central to this year’s climate summit is making progress on the Durban Platform for Enhanced Action (or ADP, in United Nations parlance), covering a range of contentious issues around countries’ commitment towards reducing greenhouse gas emissions and addressing the impacts of climate change.
The ministerial round of the Climate Summit saw a number of developing countries making yet even stronger statements on the new documents from the ADP co-chairs which will supposedly be the basis for negotiations on the elements for a draft negotiating text. Developing country representatives lashed at these new documents as allowing for an ‘early harvest’ of issues favoring developed countries and putting concerns of developing countries to the backburner. Debates over procedural issues continued throughout the day. But while developing countries are up in arms taking forward their concerns both in process and substance, developed country representatives and other country groupings articulated their support for the co-chairs methods of handling the sessions.
Meanwhile, civil society has also held bigger and bolder actions at the climate summit.
Delegates were greeted with images from the aftermath of supertyphoon Haiyan that devastated the Philippines last year to remind them that climate vulnerable communities need to see urgent progress in Lima. With a call for ‘solidarity, not just sympathy’, more than 100 civil society representatives stood in solidarity with the Filipino people and all vulnerable communities, and called on the negotiators for an ambitious and equitable outcome at Lima.
Another action that took the COP by ‘surprise’ was when a group of civil society delegates stormed a corporate side event that promotes carbon capture and storage (CCS), a false solution to climate change that furthers corporate interests. ###
Tags: climate change, climate talks, COP20, Lima, Peru, UNFCCC

World trends discussed at UP forum

On the illegal, mass arrest of 92 peasants and advocates in the Philippines