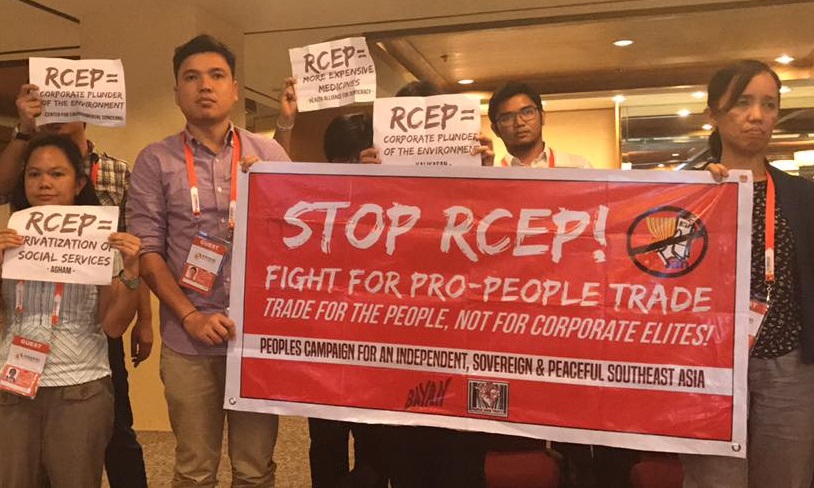 [[{“type”:”media”,”view_mode”:”media_large”,”fid”:”1687″,”attributes”:{“alt”:””,”class”:”media-image”,”height”:”288″,”style”:”width: 350px; height: 210px; margin: 5px; float: right;”,”typeof”:”foaf:Image”,”width”:”480″}}]](Manila, May 10, 2017) — Grassroots organizations and civil society groups staged a protest action today during a stakeholder’s engagement meeting in front of negotiators of the 16-member Regional Comprehensive Economic Partnership (RCEP) in Manila, Philippines. Now on its 18th round of negotiations, RCEP participating countries are on full throttle to resolve existing bottlenecks in the trade talks.

With calls to “stop RCEP” negotiations, CSOs raised the lack of transparency in negotiations citing the absence of any negotiating text open for public scrutiny. The group also questioned the legitimacy of the trade deal as it has been under negotiation in the past four years with governments claiming to negotiate in behalf of their people while negotiations remain shrouded in secrecy – being discussed only between governments, allowing corporate lawyers full access to the text, but never for civil society groups and people’s organizations.

“Should RCEP negotiations remain secret, it means that RCEP is not for the people,” said IBON Foundation Executive Director Sonny Africa as he emphasized the lack of transparency in negotiations.

Civil society also highlighted RCEP’s impending impacts on various sectors such as its facilitation of labor contractualization, more free movement of labor across the region, and a race to the bottom for wages and labor standards through provisions in the leaked RCEP investment and services chapters. They also highlighted intellectual property rules that will consolidate corporate monopoly over seeds while criminalizing seed saving practices.

CSOs also reiterated RCEP intellectual property provisions that extend patent monopoly over medicines that allow pharmaceutical giants to dictate medicine prices while also expressing alarm over its deregulation of extractive mining activities through the Investor-State Dispute Settlement (ISDS) mechanism and the ISDS as a blatant violation of national sovereignty.

After the protest action and interventions from civil society across the region, a representative from India’s Trade Negotiating Committee committed to organize another stakeholder session CSOs for the 19th round of negotiations in Hyderabad, India this July.

After 17 rounds of negotiations and with only 2 chapters completed thus far[1], RCEP talks are now focusing on its more substantive and controversial chapters – trade in goods, services, and investment. According to reports, a major road block in the negotiations is the disagreement on which market-access areas should be covered by tariff reduction schemes eventually reducing applied tariffs from 90 percent to zero once RCEP comes into force.

Tariff reduction remains a sticky issue for India. With a $52.7 billion goods trade deficit with China in 2016, India has become more reluctant in quickly signing a trade deal which it fears would open the floodgates to cheap Chinese imports at a period wherein its domestic industries are not yet strong enough to compete with foreign enterprises. In addition, India’s apprehension also has to do with how the country did not enjoy any significant growth in exports after signing an ASEAN-India FTA in 2010 while its imports have increased by 30 percent leading Indian farmers helpless to compete with cheap oils and spices from Southeast Asia.

As a means to resolve this seeming deadlock, the Philippines through its lead negotiator Department of Trade and Industry Undersecretary Ceferino Rodolfo recently proposed an “ASEAN Minus X formula” which would allow certain flexibilities for countries who are not yet ready for the level of commitment being demanded in certain provisions of the trade deal. Philippine trade negotiators see this “opt out and reciprocity” modality as a way to speed up the negotiations in order to reach agreements in areas where there is lack of consensus. This way, should countries feel unprepared to take on certain commitments, they can choose to “opt-out” both from the commitment and its “expected benefits,” while maintaining the option to reconsider later should they decide that they’re ready to join in.

Despite efforts to accelerate the talks and a target date of completion by the end of the year, civil society groups believe that existing disagreements will remain unresolved within 2017 and may even extend for another year or two. What is certain at this point however is that amid the US pulling the plug from the Trans-Pacific Partnership on a backdrop of growing discontent over neoliberal FTAs, the resistance of people’s organizations and civil society groups across Asia Pacific are only bound to become stronger as the struggle against RCEP and other unfair trade agreements intensifies.

[1] Chapter on Small and Medium Enterprises; Chapter on Economic and Technical Cooperation

Peoples from around the world join calls to stop the killings, resist tyranny in PH