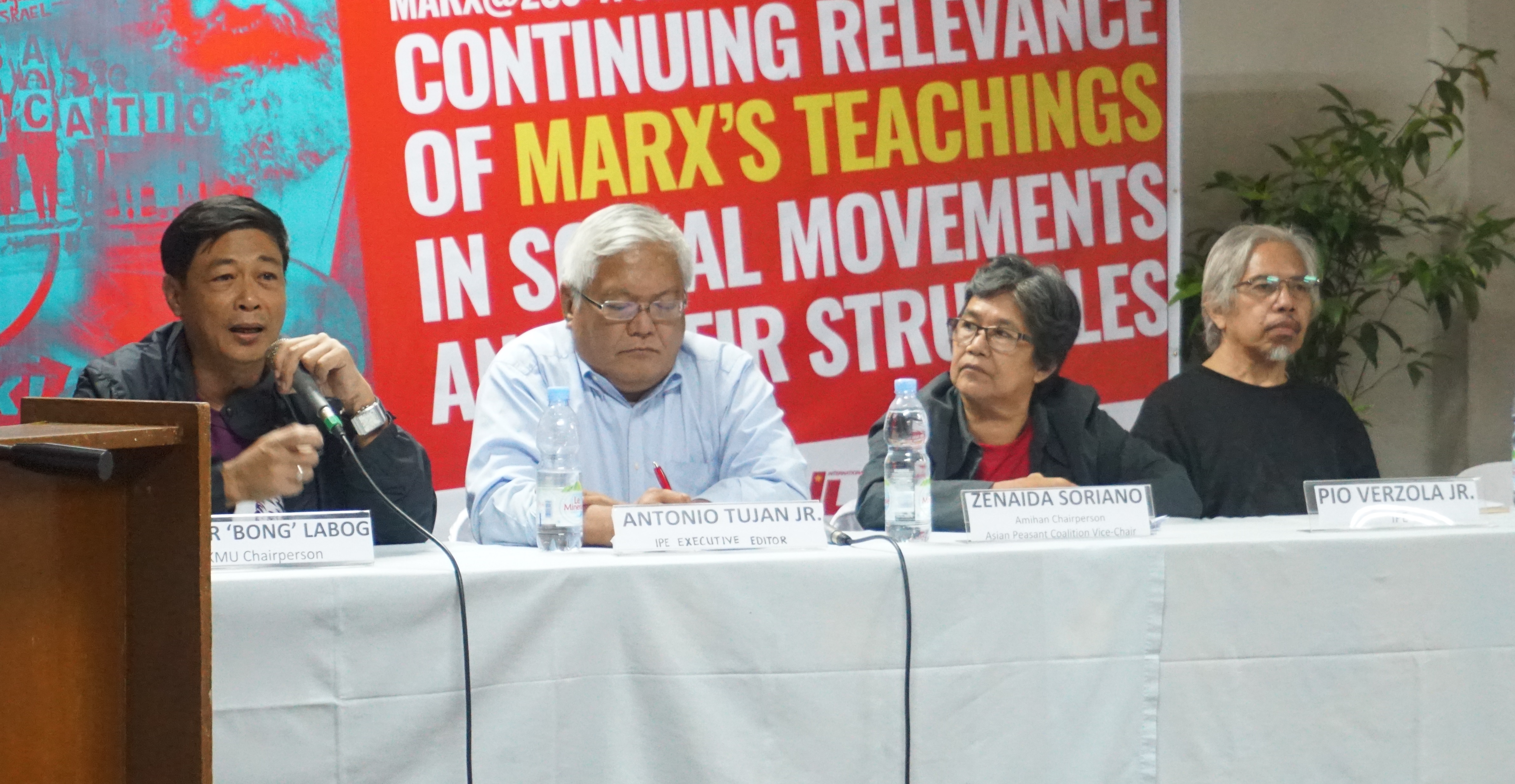 Manila — 2018 marks the 200th year since the birth of the political economist and theorist Karl Marx. This year’s commemoration of his legacy marked a continued interest in his work, which has surged since the financial crisis and the long-drawn economic “recovery.”

Around the world, various conferences and fora have been held to commemorate his thought and influence. In Manila, a Marx@200 Study Conference was held last 13 June, at the University of the Philippines-Diliman. The conference featured papers, video messages and a lively discussion on the ways Marx’s work continues to inform social movements that forward alternatives to today’s neoliberal, monopoly-driven world economy.

Marx and looking at the world economy today

“Southern share of global exports in manufactures increased from just above 15% in the early 1970s to between 60% and 70% in the first decade of the 21st century,” Tujan said. For him, this “represents an exploitative integration of Southern workers,” into networks led by transnational corporations (TNCs).

Labog,on the other hand, stressed how the “flexibilisation” and liberalisation of labour markets in Southern regions such as Asia drive these corporate networks. In 2018, the International Trade Union Confederation has reported that all 22 countries in the Asia-Pacific have committed violations on workers’ rights, with Cambodia, Bangladesh and the Philippines among the 10 worst countries for workers.[i]

Pio Verzola Jr. (IPE), meanwhile, made headway into a discussion on the role of technological development in the world economy – where automation of parts of production and intellectual property have created even bigger monopolisation of wealth. Recently, the UNCTAD reported that a substantial part of the “surplus profits” of the world’s top 1% firms are from “leading high-technology sectors.” [ii]

Other speakers such as Len Cooper (International League of Peoples’ Struggle, ILPS) provided broad strokes of the tasks confronting today’sworkers’ movements, especially in light of the threat of right-wing repression. Jose Maria Sison, Chairperson of the ILPS, also delivered a message on the continuing need to study Marx today towards resisting the monopoly-led world economy.

The role of women in social transformation was also prominently featured among the speakers in the study conference.

Citing Marx, Marie Boti of the International Women’s Alliance spoke of the need for the “crucial aspect [of] class” in today’s feminist and women’s movements.For Boti, genuine social transformation cannot be achieved without “women workers [who are] part of the toiling people of the world,” “without our [women’s] participation in the struggles in each of our countries.”

Soriano stressed how Philippine peasant organisations’ link with the workers’ movement to develop “political consciousness” as they campaign for farmers’ rights. Lestari, meanwhile, pointed to how migrants need to be hand-in-hand with other workersin resisting the dominance of neoliberal globalisation, where migrant and domestic work are treated as “cheap and docile” labour.

Building knowledge with the people

The open forum featured questions from attendees and members of people’s organisations. Questions revolved around international relations, as well as clarifications on the question of technology; agrarian reform in the Philippines; andcommon workers’ struggles between Australia and the Philippines.

The Institute of Political Economy will publish the speakers’ inputs in a book, to be released in August 2018. Pertinent comments from the open forum will serve as important points to consider in the papers’ revisions.

The Marx@200 Study Conference was co-organised through the Institute of Political Economy (IPE), the International League of Peoples’ Struggle (ILPS), and the Kilusang Mayo Uno (KMU). The IPE, an initiative of IBON International, undertakes research and other support activities for policy formulation and the development of alternatives for political economy issues in the Philippines and the world.

For Antonio Tujan Jr., who is also the Executive Editor of the IPE, enriching understanding on political economy is essential for social transformation.

“We hope that this Marx@200 forum and the others launched by progressives would enable us to deepen our study of political economy to look at today’s crises, with a view for social change from the grassroots,” he said. ###

A Burial Ground for the Doha Development Round