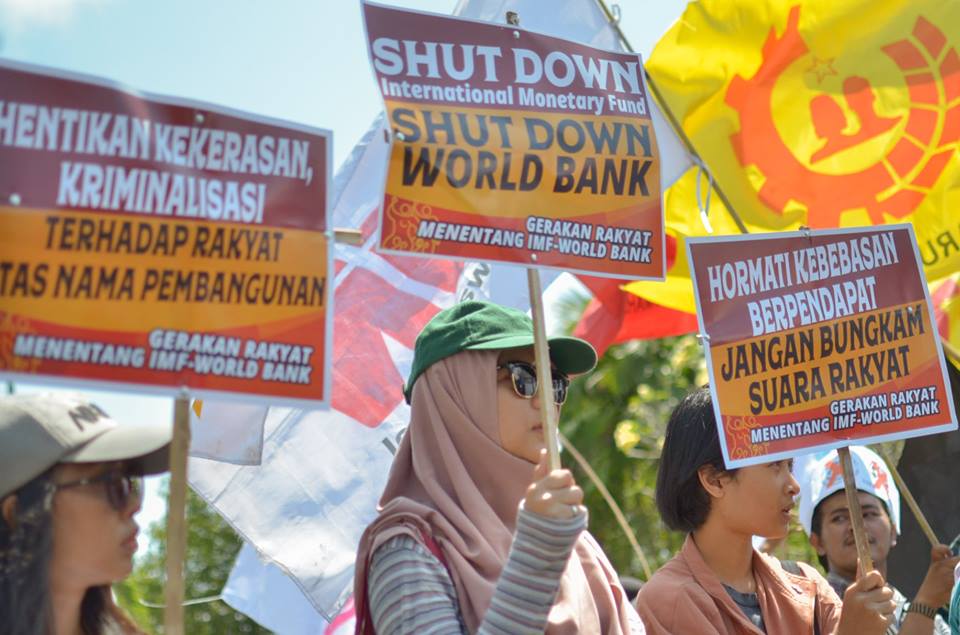 In this previously unpublished article, our executive director, Amy Padilla, reflects on the IMF-World Bank Annual Meetings and the parallel People’s Global Conference held in October 2018.

The International Monetary Fund (IMF) and World Bank Annual Meetings in Bali were held in mid-October, amidst controversy regarding repression of independent, people-led initiatives. The Peoples’ Global Conference (PGC) against the IMF-World Bank gained prominence due to attempts of Indonesian state actors to silence the initiative.[i]

PGC organisers faced not only a barrage of threatening messages and false accusations of links to “terrorist” groups, but they also saw regular surveillance by suspected intelligence personnel (even within the halls of the Annual Meetings venue) and police-led sabotage of conference logistics.

For their part, PGC organisers were quick to call out those they saw as the main culprits in the debacle: the Indonesian government which spent more than USD 56 million for the Annual Meetings with its militarised security measures, and the IMF-World Bank with their defensive response to people’s actions that hold the US-led financial institutions and their tarnished legacies to account. Movements were also quick to point out that expensive meetings were held just months after consecutive earthquakes and a tsunami in the country.

We could hazard a likely reason why the PGC was subjected to such repression. The conference – organised by movements, civil society and Indonesian people’s organisations – sounded the alarm over what they saw as the further “corporate capture of the development agenda.” The Indonesian groups under the Gerakan Rakyat Menentang IMF-WB (People’s Movement against IMF-WB) were critical of both the IMF and the World Bank’s legacy to the global South as an enabler of corporations, and the institutions’ current approaches to “development.”

After its earlier push for public-private partnerships (PPPs) worldwide, the World Bank has hit the stride in the “Maximizing Finance for Development” (MFD) as the latest in its business-led “solutions.” The MFD approach is operationalised as a sequence of stages that prioritises private sector activity and funding for infrastructure projects and “development” programs in the global South.

The cascading stages include strengthening existing privatefirms’ existing activity, opening up for business through investment reforms, further de-regulation, public-private partnerships, and even resorting to using public resources to incentivize businesses. Under MFD, all these have to be considered first before the use of public money for services and infrastructure. This makes public spendingfor social needs less of a last resort and more like a footnote. It further threatens long-lasting impacts: a “development” model where the transformative role of people’s organisations and movements is rendered absent.

The more things change, the more they stay the same

The WB admits that the MFD is not altogether novel as they have been enabling the “private sector” – particularly transnational corporations – for decades.Without being exhaustive, one could cite various cases, all of which violating the peoples’ right to participate and shape their development path.

Aside from government corruption in oil revenues,[ii]communities along the Chad-Cameroon pipeline lost livelihoods and were displaced[iii] to construct the project for Chevron, Exxonmobil, Petronas[iv] and the Cameroon Oil Transportation Company SA. In Peru the International Finance Corporation (IFC), the World Bank’s business-lending arm, has funnelled more than USD 23 million to support construction and expansion ofYanacocha gold mine for US-based Newmont Mining Corporation and its partner firm, Buenaventura S.A.A.[v] With the IFC even owning 5% stake in the mining project, communities have cited threats of landgrabbing and violence from company security.[vi]

Way back in the 1970s, the World Bank supported the Chico River Dam project in northern Philippines which faced the vigorous resistance of indigenous peoples whose communities would have been flooded. World Bank-funded mining, road and energy mega-projects in North East India have been similarly criticised for destructive environmental impacts, loss of livelihoods and agricultural lands, as well as violations of indigenous peoples’ right to self-determination.[vii]

But what is unique to the MFD is that these kinds of corporate-oriented “development” would be systematised further. The World Bank is even calling for tighter coordination among its institutions and more upfront roles for the IFC and its insurance and risk guarantor, the Multilateral Investment Guarantee Agency.

The road for business interests is also partly paved by the G20 economies’ Eminent Persons Group, made up of country representatives, academics but as well as a JP Morgan Chairman—almost all having  past and present positions in the IMF-World Bank. Responding to the same rhetoric of a “financing gap” in the global South, they are pushing to link infrastructure with financial products[viii] as funding modes for Southern countries. The explicit aim is to make these attractive to institutional investors,[ix]  that is, to international finance capital. But even economics professors see this drive for securities as akin to those that triggered the 2008 crash, as well as dangerous for developing countries which are left with less policy space and even more exposure to fluctuating financial markets.[x]

During the Annual Meetings, related buzz on “fintech” – financial technology – tried to sell it as a “key pillar” for development through peoples’ increased access to credit. Under today’s economic system, talk of “financial inclusion” would mean the use of the advancements in the technology sector to facilitate and expand access of international finance capital to developing country financial markets.

Thus the more things “change” the more they seem to stay the same, ten years since the 2008 crisis and amidst IMF warnings of another possible downturn. Regarding today’s inequalities, the meetings hatched opportunities for the World Bank to call for “investing in human capital” to improve workers’ productivity through education and healthcare. Washing their hands clean, the World Bank hides that decades of policy “advise” for labour market deregulation as well as privatisation of hospitals and educational facilities contributed to today’s high numbers of informal workers and other inequalities.

Moving forward through genuine change from the ground up

In lieu of these“solutions” founded on unchanged or merely repackaged policy and economic models, it is long overdue to heed the calls of civil society, movements and people’s organisations.

This is especially the case today. At one level, PPPs have increasingly been exposed by civil society organisations for undue financial costs as well as social costs. People’s rights to basic services are at stake with increased “user fees” required of hospitals, water and transport services to recoup private investment costs. Current trends to actively reverse privatisation of water services have also been documented in many Southern countries.[xi]

At another level, civil society also raised concerns regarding the MFD approach. During the Bali Annual Meetings, the Peoples’ Global Conference called to “reclaim our rights, reclaim our future.” Starting from acknowledgement of the deep problems in neoliberal models, people’s movements such as the Gerakan Rakyat Menentang IMF-WB have called to “shut down” the IMF-World Bank and to resist entrenched business interests in the development agenda throughout the duration of the Annual Meetings.

These initiatives are possible building blocks for peoples in the South to build their own collective power to exact accountability from their governments as well as the IMF-WB. The repression encountered by the Peoples’ Global Conference in Bali point to the urgency for toiling peoples to assert popular sovereignty and their political and economic rights.  Movements need to be watchful of the undemocratic legacies of the IMF-World Bank as another Annual Meeting outside the United States is set for 2021, to be held in Morocco.

More than half a century since the IMF-World Bank were founded, and decades since the World Trade Organisation, major policy actors who have been at the forefront of neoliberal globalisation now talk with sour words about its legacies. The UN Conference on Trade and Development recently released reports calling out the “free trade delusion,” while criticising “financing gap” narratives in infrastructure that neglect the primacy of national development strategies.[xii] A UN Rapporteur has criticised the “tsunami of privatisation” that had been pushed by the IMF, World Bank and even the United Nations that he admits prioritises profit over people’s economic rights.[xiii] Research published through IMF channels revealed increasing market concentration and corporate power since the 1980s,[xiv] and one even called neoliberalism “oversold.”[xv]

At a bigger picture, people and their organisations, especially movements, need to strengthen efforts in resisting the still dominant neoliberal policy track through exercising their sovereignty vis-à-vis their governments and international finance institutions.

This is to reclaim policy space for development and trade that are genuinely democratic, and work on principles of complementarity, solidarity and mutual aid. This is to assert that these institutions should primarily function for, and should be accountable to, workers, farmers, indigenous peoples and other small-scale producers. Specifically, this could mean national or international people-led institutions that utilise capital controls; that tax corporations progressively and end taxes burdening the poor; that end illicit financial flows and corporate “rentierism”; that have mechanisms to evaluate whether development and trade policy uplift the grassroots. Through people’s sovereignty, movements could move towards reclaiming development and its processes for addressing people’s needs, and not for corporate greed. #

[viii]Group of 20. “Roadmap to infrastructure as an asset class.” https://www.g20.org/sites/default/files/documentos_producidos/roadmap_to_infrastructure_as_an_asset_class_argentina_presidency_1_0.pdf

What frontline communities need from the UN Climate Change Summit

The Struggle for Peoples' Rights: Land, Food and Justice in Kidapawan

Southern CSOs: ‘We demand a climate fund for people and planet, not private profit’