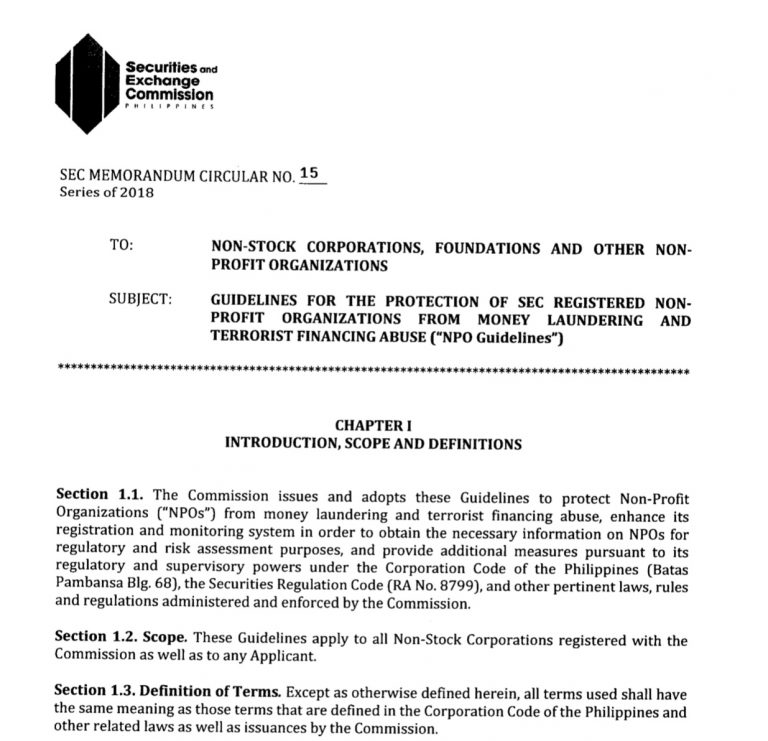 IBON International joins various organisations in expressing serious concern on the Memorandum Circular No. 15 released by the Philippine government’s Securities and Exchange Commission (SEC Memo 15) and demands its immediate recall.

Under SEC Memo 15, non-profit organisations in the Philippines would be classified from “low” to “high risk” of “terrorist financing abuse.” Organisations would be required to subject almost all of their operational information through the unchecked discretion of the SEC and the Anti-Money Laundering Council under the Duterte administration. Through the bogey of “fighting” money laundering, the circular threatens to limit the already narrowing spaces for civil society in the Philippines, while impinging on the people’s foundational rights to assemble and to organise.

SEC Memo 15 is also another step in the ongoing militarisation of civilian agencies in the country. Former and current generals have already been appointed to various agencies. The SEC memo meanwhile allows the Philippines’ notorious security apparatus, from the police to the military, to intervene in the activities of civil society organisations (CSOs) in the name of “investigation” and “intelligence gathering” of non-profit organisations.[i]

In the Philippines, CSOs are forced to disclose more operational details about their work for democracy and people’s development, while the Philippine government is becoming less accountable. Within the last year alone, a slew of high profile officials convicted of corruption charges have not been arrested, or have been freed, or else have had court cases junked in their favour.

On the ground, CSOs witness shrinking democratic spaces and threatened rights. Police forces recently admitted clandestine intelligence operations against teachers’ unions. In Southern Philippines, under martial rule, indigenous peoples and farmers have been reported to have evacuated from their communities due to military bombings.[ii] The nightmare of the so-called “war on drugs” continues, along with moves to lower the country’s criminal age of responsibility to nine years old. These threaten to further trample on the poor and, along with neoliberal economics, continue to neglect their right to genuine development.

Indeed, the SEC memorandum circular against CSOs is another brick in the wall that stands to block the Filipino people’s realisation of their rights. IBON International asserts that CSOs have the right to pursue their work, especially for development that is owned and led by the toiling sectors in society. CSOs for people’s development and social justice are important actors in contexts such as the Philippines, where maldevelopment and economic injustice are found in both cities and countryside.

The Philippine case is not isolated amid shrinking civil society spaces around the world. "From Latin America to the Pacific," the CSO Partnership for Development Effectiveness writes," rights defenders are being targeted by governments and government sanctioned elements, often in cahoots with corporations."[iii] In Brazil, Cambodia, India, Indonesia, West Papua, Turkey, Kenya, Nigeria, Egypt and others, CSOs’ rights to organise and assemble are threatened, threatening their roles as development actors in their own right and compromising chances for vibrant, genuinely people-led democracies.

The IMF-World Bank’s agenda for debt and “recovery”: A business-as-usual

The Climate Crisis: Shifting the Tides for Climate Justice