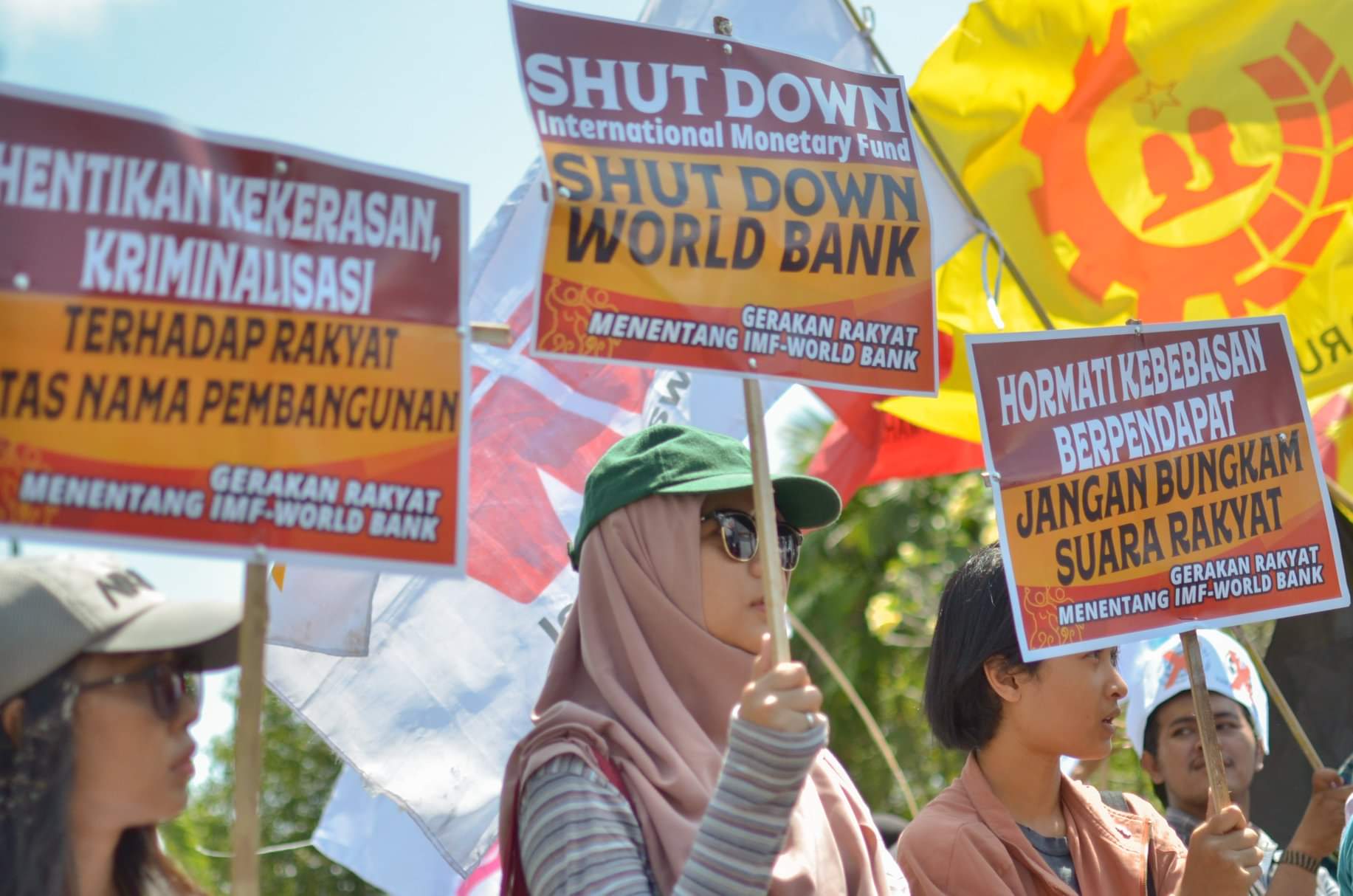 An action in Bali, Indonesia against the IMF, World Bank. Photo by Carlo Manalansan

At the Spring Meetings, the IMF and World Bank omit crucial questions about  “recovery”. Who is recovering from the pandemic?

At the Spring Meetings of the International Monetary Fund (IMF) and the World Bank Group, held from 5 to 11 April, there was much prattling about “recovery” from the pandemic. They omit crucial questions about this “recovery.” Who is recovering from the pandemic? Certainly, the working peoples in the Global South are in a worse situation. IMF and World Bank conditionalities have long slashed public spending that led to a critical shortage of health workers in most low-income countries, drove the privatisation of health and other social services, and made public systems ill-equipped to respond to the pandemic.

The Bank’s “green, resilient, inclusive recovery” agenda remains aligned with the prioritisation of the big private sector and corporate finance in pandemic responses, over people’s rights and welfare. (See infographics on “Green, resilient, inclusive recovery”?: The World Bank Group’s agenda today) According to CSO analyses, between April and December 2020, USD 21.8 billion of the Bank’s USD 82.9 billion commitments (including COVID-related commitments) were coursed through the IFC and largely benefited corporate private sector.[i]

And while more than half of all low-income countries are already at risk of debt distress, the IMF and the World Bank continue to promote debt-driven responses. Despite calls for major debt cancellations by civil society, the IMF-WB have only resorted to delaying due payments. (See infographic on debt burdens and the IMF, World Bank.)

The World Bank crucially obscures how the underdevelopment of the global South is attributable to historical resource drains by Northern transnational corporations.

In the Civil Society Policy Forum Session, “An economic future for whom? The Cascade/Maximizing Finance for Development (MFD) and recovery”, co-organised by IBON International last 26 March, CSOs emphasized the clear-cut conflicts between the interests of the big private sector and finance, championed by the MFD, and those of people’s rights and welfare.

The MFD is driving “the privatization of essential services and the financialization of development assistance,” according to Henry Morales from the Reality of Aid-Latin America and the Caribbean, and the Latin American Network on Debt, Development and Rights. This “development approach” undermines people’s rights and sovereignty as it influences countries to make policy changes to facilitate the entry of foreign businesses, and treats public financing as a last resort. For instance, in Somalia, the IFC is facilitating Private-Public Partnerships (PPPs), despite growing criticisms of PPPs being just privatization by other means.

The Bank insists that the MFD will address the “financing gap” in Southern countries’ resources for development goals, but it supports corporations that use tax havens and capture revenues. A 2016 CSO study showed that “84 percent of IFC lending to Sub-Saharan Africa went to companies that used tax havens”.[ii]

The Bank crucially obscures how the underdevelopment of the global South is attributable to historical resource drains by Northern transnational corporations in extractives, cheap export commodities, debt servicing, payments on foreign direct investments, and illicit financial flows. In 2018, the global South lost an estimated USD 430 billion in 2018 to Northern states and corporations, as the amounts flowing out of Southern countries are greater than the external finance they “receive” in FDI, portfolio investment, loan disbursements, aid, and remittances. A 2019 IMF study even shows that 40 percent of world FDI is “‘phantom capital’ that’s used by corporations to pay lower corporate taxes”.[iii] Southern economies’ dependence on commodity exports and FDI, in search of export revenues to pay their debts,  also contribute to the trap of export-dependence and further resource drains.

Centering the questions of development on a mere “financial gap” obscures fundamental issues, such as how corporations undermine people’s participation in development processes, and how development should be done instead: that is, it should be based on people’s needs and uphold their sovereignty.

Meanwhile, donor countries continue to neglect their historical commitment of allotting 0.7% of their gross national income towards ODA flows. Instead, ODA is also increasingly used to “catalyse” and subsidise private investment such as in blended finance deals—arrangements promoted by the World Bank.

Currently, centering the questions of development on a mere “financial gap” obscures fundamental issues, such as how corporations undermine people’s participation in development processes, and how development should be done instead: that is, it should be based on people’s needs and uphold their sovereignty. The World Bank finances and promotes mega-infrastructure projects that do not meet people’s social infrastructure needs, nor even generate domestic revenue, and only exacerbate debt burdens. The Bank’s history also shows disregard for marginalized communities.

In the same CSPF session on the MFD, Beverly Longid of the International Indigenous People’s Movement for Self-Determination and Liberation (IPMSDL) summarized their experience with the World Bank and other international financial institutions (IFIs) as “characterized [by] violence, exclusion, deceit and discrimination.” She cited the struggle of the IP in Cordillera, northern Philippines against the World Bank Chico River Dam Project under the Marcos dictatorship in the 1970s and 1980s, and voiced out concern that the issues of that period remain with IFI approaches and projects today. She also raised the issue of the accountability of IFIs that continue to engage with and provide financial support to authoritarian governments and military dictatorships such as the Philippines and Myanmar.

Visioning a people’s future away from the dictates of the IMF, World Bank

“Debt cannot be repaid, because if we don’t repay, lenders will not die…But if we repay, we are going to die.”

The Spring Meetings’ fundamental continuation of status quo, amid multiple global crises, compels peoples and their organisations to act and continue asserting people’s rights and sovereignty, and envision a future that is not tied to the corporate agenda of the IMF and World Bank.

The late Burkinabe president Thomas Sankara called on African states for a united front against debt at the 1987 summit of the Organization of African Unity in Addis Ababa, Ethiopia: “Debt cannot be repaid, because if we don’t repay, lenders will not die…But if we repay, we are going to die.” His call remains relevant to the global South today where paying government debt means taking away resources for essential, even life-saving, health and other social services amid the continuing pandemic and simultaneous economic and climate crises.

In the 1970s and the 1980s, Indigenous Peoples in the Cordillera region in the Philippines staunchly opposed a World Bank Project and won. Last year, the World Bank abandoned its proposed dam project in the Bisri Valley in Lebanon after opposition from communities. In 2018, people’s organisations and civil society from 18 countries called for the shutdown of the IMF and World Bank at their Annual Meetings in Bali, Indonesia for their roles as “undemocratic and unaccountable global institutions of monopoly finance capital [that] have enabled the massive pillaging of the economic and natural resources of the world.” People’s movements have shown that it is possible to veer away from the IMF-World Bank’s dictates. Most importantly, they show us that it is just to resist the IMF-World Bank’s dominance and to determine our own development paths. ###

[i] European Network on Debt and Development (EURODAD). 2021. ‘Rebuilding better’, but for whom?: A review of the WBG response to the Covid-19 crisis

Book on first IFPRS is off the press