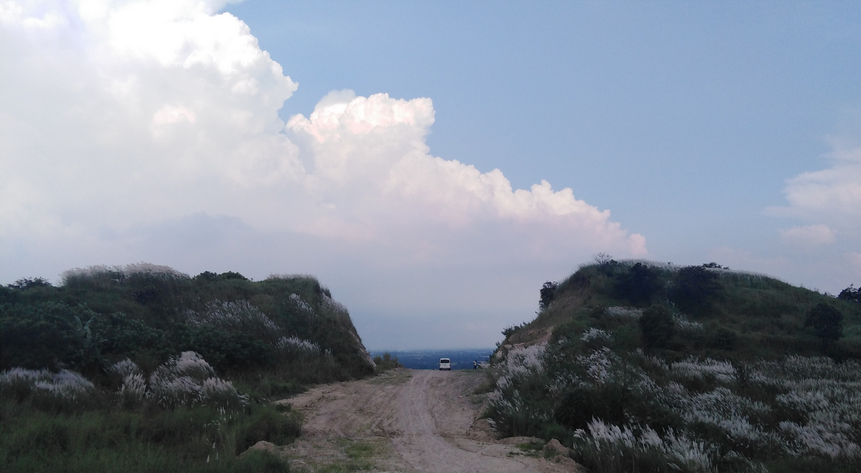 The 30th Southeast Asian (SEA) Games hosted by the Philippine government, which ran from November 30 to December 11, was confronted by a slew of problems—from allegations of malversation of funds to the inhospitable hosting of athletes from participating countries.

Elite government officials attempted to quell public criticism by appealing to people’s patriotic sentiment, citing the SEA Games hosting as a national cause. People diverted anger over the logistics failure of the regional multi-sports event—which meant wasted taxes—into support for the country’s competing athletes. Despite the government’s lapses, Filipino competitors played superbly and finished with 149 gold, 118 silver and 120 bronze medals.[1]

Among the issues met by the SEA Games is the displacement of indigenous and peasant communities for the construction of the much boasted “world-class” facilities built in New Clark City for two SEA Games events. For these communities, the Games meant not just vicarious embarrassment but the loss of ancestral lands and livelihood. Affected communities in Capas, Tarlac say that the 30th SEA Games were used as a way to attract investors for the NCC.[2]

The NCC is a projected Php 607 billion (USD 11.9billion) development project covering 9,450 hectares across Capas and Bamban in Tarlac province in Central Luzon. The project is administered by the Bases Conversion and Development Authority (BCDA), a government agency that works with the private sector to develop former US military bases. It was established in 1992 under former President Corazon Aquino following the scrapping of the Military Bases Agreement of 1947 by a historic 12-11 Senate decision to reject the Aquino endorsed RP-US Treaty of Friendship, Cooperation and Peace which would have extended the US military use of Subic Naval Base for ten more years.[3] 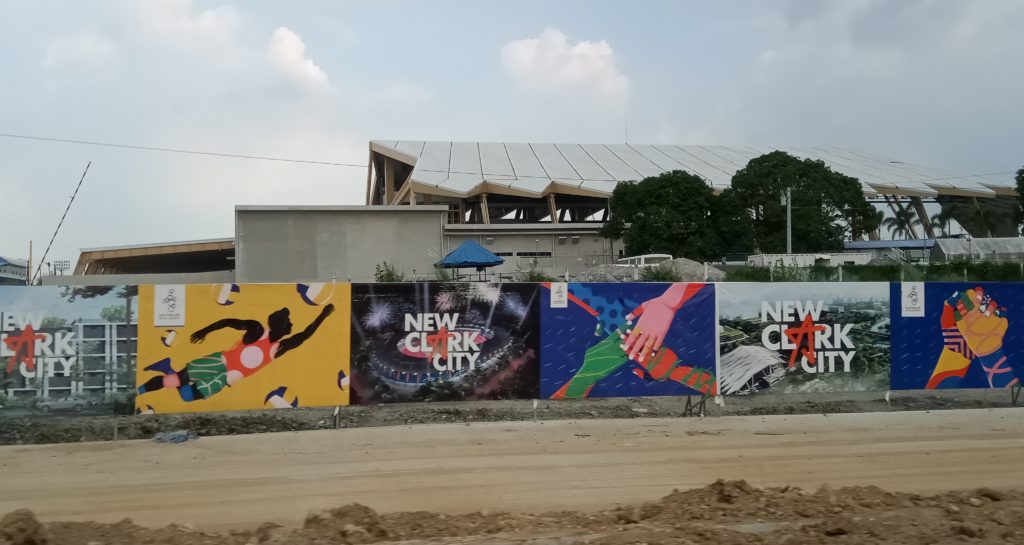 Photo: One of the sports facilities for the 30th Southeast Asian Games under construction on lands formerly used for agriculture.

The NCC is dubbed as the Philippines’ first “smart, green, and resilient city” masterminded by the international financial institution Asian Development Bank along with other government actors such as the Japan Overseas Infrastructure Investment Corporation (JOIN), Singapore’s consultancy company for infrastructure and urban development Surbana Jurong, and corporations such as AECOM, Nippon Koei, and Philkoei International Inc.[4][5] The signing of a Memorandum of Cooperation by the joint BCDA and JOIN with Surbana Jurong in February 2018 signaled the construction of the NCC.

Infrastructure public-private partnerships (PPPs) like the NCC are neoliberal arrangements endorsed by IFIs such as the International Monetary Fund, the World Bank Group, and the Asian Development Bank as a “cross cutting” solution for economic growth at minimum public spending and in the name of “infrastructure development” in the global South.

Neoliberal indicators of development such as economic growth, measured in Gross Domestic Product (GDP), have been proven to be biased to the private sector, and inadequate to gauge societal development. Neoliberal policies are known to have caused intergenerational poverty and inequalities. This year has seen massive protests across the globe against elite-led governments that have implemented and even institutionalized neoliberal policies.

Passing related laws is one way of institutionalizing neoliberal objectives and policies. For instance, special laws on public-private partnerships are implemented by governments to ease the process of venturing into PPP projects (See Box 1).

Contrary to claims that PPPs are cost effective, innumerable examples of PPP projects showed that it is more expensive than public procurement. The private sector is “constrained by its profit-maximizing orientation,”[6] that is, how much it is willing to lend depends on how much are the guaranteed profits. PPPs also entitle the private sector access to public funds and other privileges such as those enumerated in Box 2.

The sports facilities in the NCC include a 20,000-seater Athletic Stadium, a 2,000-seater Aquatic Center, and an Athlete’s Village built through a joint venture agreement between BCDA and Malaysian firm MTD Capital Berhad. Indeed, these will cost the Philippine government more than the actual construction expenses of the private firm.[7]

MTD Capital Berhad spent Php 8.5 billion (USD 166 million)to construct the sports facilities, while BCDA arranged a Php 9.5 billion (USD 186 million) loan from the Development Bank of the Philippines on top of a 40-hectare contribution as equity capital. To transfer ownership to the BCDA, it would pay the Malaysian firm a Php 2.2 billion (USD 43 million) installment for five years, amounting to a total of Php 11.1 billion (USD 218 million),or Php 2.5 billion (USD 49 million) beyond what the Malaysian private firm spent—in the name of “returns” to investment. The BCDA and MTD Capital Berhad will also equally share the income of the sports facilities for 25 years. The BCDA said that the joint venture was advised by the Asian Development Bank.[8]

The ADB continues to champion the neoliberal capitalist agenda through its endorsement of PPPs especially in the development of mega-projects such as the NCC despite the historical failure of PPP projects in terms of enabling democratic and equitable access to resources as well as ensuring sustainable resource use.[9][10] Instead, it enables resource grabs for capitalist profits at the expense of peoples’ sovereignty and rights, and environmental destruction.

The ADB serves an extensive influential role in the development of NCC.[11] Aside from advising the joint venture agreement between BCDA and MTD Capital Berhad, the ADB also advised the joint venture for NCC Smart Water Utility[12]. It also agreed to finance the construction of another NCC-related project, the Malolos-Clark Railway,worth USD 2.75 billion in total[13][14]It provided the first tranche of the loan worth USD 1.3 billion in July this year with accumulating interests and other charges. [15] Moreover, the government is required to submit regular standard reports to ADB regarding the use of the loan. 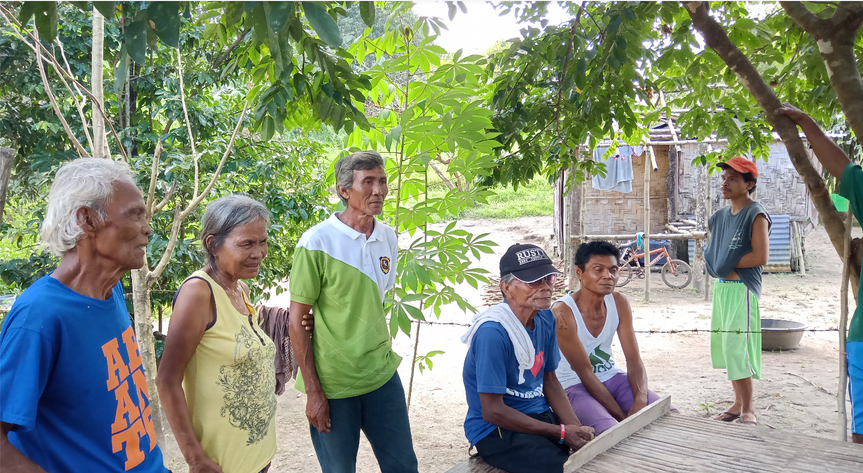 Photo: Indigenous Aeta communities are among those that are being displaced by the city construction.

The ADB also conducted a Biodiversity Assessment and Hydrology Study for the NCC “to ensure the conservation of flora and fauna” and in line with its claim of “retaining its river, avoiding cutting down trees, and building around–not over–natural geographies.”16[17] However, communities in NCC-affected areas in Capas, Tarlac have witnessed bulldozed hills, forested areas, and agricultural lands. Residents have also observed loss of fish, birds, and other native animals that used to be common in the area as a result of the redirection of the natural flow of Cutcut and Marimla rivers for a 1.4 kilometer river park.18 This claim is backed by researchers from the University of Glasgow in the United Kingdom and the University of the Philippines.19

Despite being excluded from all development processes of the NCC project, the people bear the burden of the conditionalities of the loans and the destructive investments provided by the ADB and private entities.

Solidarity to the communities of Capas, Tarlac in their struggle for people-centered development

The so-called “sustainable city” has displaced indigenous Aeta and peasant communities in Capas, Tarlac, who have been residing and cultivating the land for subsistence and livelihood for generations, long before the lands were appropriated as US military bases.20 With almost no recourse against their ordeal with the private-public partnership of the NCC, the residents still persist in their struggle for land and life.21 Peasants assert their right to land by practicing what could be termed as “guerrilla farming”—they scatter seeds in land already prepared for construction. An elderly peasant woman even blocks bulldozers to halt construction. Amid the rampant government sell-out of our natural resources for private interests, as is the case with New Clark City, peoples’ organizations and civil society must build solidarity and work together with affected communities to assert our right to equitable people-centered development. #

[2] This is based on  interviews and discussions with affected communities in Capas, Tarlac on two occasions in September and October this year.

18  Based on the interview.

20 Based on the interview.

21 Based on the interview.

Conference on Democracy, Self-Determination and Liberation of Peoples

From New York to Santiago de Chile: Navigating the road to climate justice