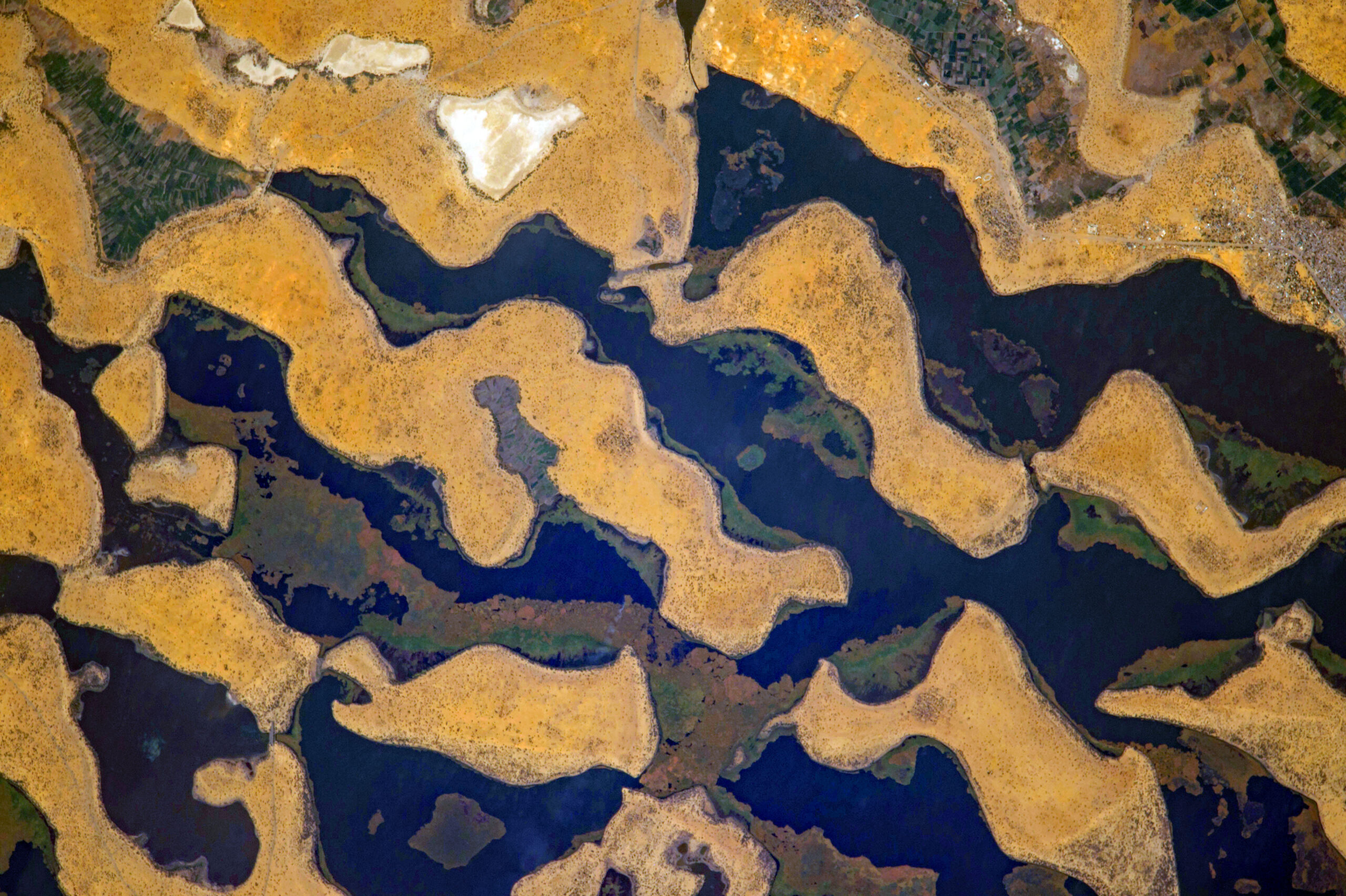 Lake Chad, one of Africa's largest lakes, has shrunk by 90% due to climate change. Photo credit: Stuart Rankin via Flickr

Africa has warmed faster than the global average temperature. The climate crisis continues to increase the risks faced by African communities already grappling with poverty and social inequalities. Yet African countries barely have the financial resources required to respond to the pressures and damages from the climate and ecological crisis. For one, a massive, decade-long debt binge has squeezed state budgets as the debt repayment schedules fall due.

The African continent continues to suffer disproportionately from the impact of climate change despite contributing a mere 3.8% of the global emissions. Africa makes up the majority of the 48 countries in the global South that are known to host close to 1 billion people, yet the African people account for only 0.55% of the overall emissions.

Even then, the continent’s 54 countries have struggled to assert their stand, make their voices heard, and influence the agreements that shape climate issues at the global stage. Since 1990, big economies such as the United States and the European Union have muscled their geopolitical agendas onto globally binding pacts, which often do not account for the different ways climate disruptions affect different populations of the world.

The current framework of global culpability assigns the highest benefit of industrialisation to countries in the global North while the consequences of their massive carbon emissions go to those in the fringes of global development.

Industrialised nations and corporations have neither paid a greater cost for their emissions nor redistributed more of their wealth towards those most affected. Their wealth was built from a paradigm of fossil fuel reliance, colonial extraction of resources, and unequal economic arrangements that undermine development.

Now, it is among Africa’s poor villages and marginalised communities that the climate impacts have been most destabilising, notably through hurricanes, floods, and droughts. A greater impact is also being witnessed in water cycles, including the decline of major water basins such as the Lake Chad ecosystem, the salinisation of water systems, disruption of rainfall cycles, damage to soil, and resource conflicts.

These climate issues are the core drivers of Africa’s push on climate finance and justice—one that shifts focus from mere emission targets to a broader assessment of the impact of climate change on people’s rights and social inequality.

Many CSOs, activists, researchers, and policymakers from the global South have increasingly rallied around the term “climate justice” in response to the threats facing their countries, often prompted by emissions released by industries halfway around the world.

Their voices have been augmented by calls from African scholars, grassroots organisations, and peoples’ assemblies who have tenaciously advocated for restorative ecological justice and equitable economic systems that minimize climate impacts, reduce poverty, and meet the basic needs of the vulnerable segments of society.

For example, during the annual climate talks at the COP26, held on November 6, 2021 in the city of Glasgow, a mass mobilisation decried the exclusion of many stakeholders from the South due to limited provision of COVID-19 vaccines, travel restrictions, and cash constraints.

The exclusion locked out critical voices and perspectives from key voices in the global South. It left the Summit in the hands of global North players who advocated and pushed for false climate solutions such as net-zero carbon emissions and carbon offsetting.

CSOs call for an end to these types of skewed representation at the table, which mark a much-needed call out of the policy hegemony at the global decision-making platforms by the big players.

However, the bigger impacts of the climate conversation are still felt much more acutely in several African countries. Africa has warmed faster than the global average temperature. The climate crisis continues to increase the risks faced by African communities already grappling with poverty and social inequalities. The continent will soon see shorter wet spells or heavier rains, consequently decreasing its food production.

Half of the population in sub-Saharan Africa depend on rain-fed agriculture. Regular droughts and floods have been hitting the Sahel region, killing crops and reducing yield.

Extreme weather events lead to losses of life and displacement. For instance, flooding in East Africa in 2020 killed 285 people in Kenya; 155 people were killed and over 800,000 were affected in Sudan. Floods also spread diseases by contaminating drinking water and creating breeding grounds for disease carriers, such as mosquitoes.

November 2020’s tropical cyclone Gati was the strongest storm ever to hit Somalia; nine people were killed and tens of thousands were displaced. Of the recorded 14.6 million newly displaced people in Africa for the first half of 2020, 9.8 million were disaster-related.

The climate crisis threatens Africa’s economy and the lives and livelihoods of over 100 million Africans in extreme poverty.

Yet African countries barely have the financial and logistical resources required to respond to the pressures and damages from the climate and ecological crisis. Needs are rising; the quantity and quality of financing face challenges.

For one, a massive, decade-long debt binge has squeezed state budgets as the debt repayment schedules fall due. More than 20 of Africa’s 54 countries have a national debt that is at, or near, distressed levels. Around 40% of Africa’s debt is owed to commercial creditors by 2019, compared to only 17% in 2000.

Ironically, the debt-fueled infrastructure craze has not translated to raising the livelihoods of citizens. In Kenya, for instance, poverty has risen steadily from 36% in 2014 to about 53% in 2021, despite massive construction projects that promised jobs for the people.

Despite a slowdown in the debt binge, risks still abound on the fiscal health of many of these countries. African countries are already struggling to service foreign debt while paying for essential goods such as food and fuel.

The urgent need for climate financing and action must not be Africa’s sole burden. Developed countries, who have contributed the most to past and current emissions, should have the primary responsibility of financing climate action. While developed countries have accepted this obligation in principle, issues remain in the current climate finance and response.

For one, leading experts in climate change have consistently questioned the huge disparity between climate mitigation and adaptation financing in Africa. The inability to fully fund early warning systems allows the effects to fester and grow in scope and size before they can be curtailed or where possible, forestalled.

Recent analysis of climate finance for Africa shows that only 46% was disbursed for adaptation while 56% was spent on mitigation during the period of 2014 to 2018. Poor countries have less mitigation needs since they contribute least to global emissions. Adaptation is more urgent for Africa whose poorest countries already suffer the brunt of climate impacts.

Half of the existing adaptation funding went to only to two sectors, agriculture and water supply and sanitation. Underfunded sectors, such as healthcare, are also critical to protect communities from climate crisis impacts.

Majority of adaptation finance during the same period came through loans (57%) rather than grants (42%). This further imperils African countries already buckling under the weight of debt burdens and deepens climate injustice.

In recent years, climate finance tracking platforms with a focus on Africa and the wider global South have been developed to map the flow and data on mitigation and adaptation projects. Greater awareness and civic participation in the entire process will provide more focused and compelling models for channeling the funds to respective communities across the continent.

But the lack of public finance is another problem with some developed countries, like the US and Australia, reneging on their commitments. There has thus been an increasing reliance on private finance which favors mitigation over adaptation and wealthier countries over poor countries.

Towards a people-centered climate finance and systemic change

For climate finance to be effective, it should be oriented towards the actual needs of developing countries and frontline communities. Funding must move away from the present donor-controlled, corporate-driven climate finance system to realise the imperative of climate justice.

To uphold climate justice, developed countries must fulfill their obligation of financing climate action in the global South. Of the USD 100 billion global climate finance pledge they made at COP15, only a fraction has been fulfilled.

The global North must also pledge new public climate finance and commit to delivering a minimum of USD 500 billion to developing countries by 2024. There should be a separate mechanism for loss and damage finance to provide immediate reparations and support to climate-vulnerable communities.

Climate funds must come through grants instead of loans. Currently, 80% of all climate finance comes in the form of loans or private finance. Debt cancellations, waivers, and suspensions will free up a share of African countries’ national budgets, contributing to additional finance that could be used to shift to sustainable development pathways.

For climate finance to be effective, it should be oriented towards the actual needs of developing countries and frontline communities. This entails urgent attention and funding for adaptation besides mitigation. Rights-based, people-powered solutions and practices should be fostered and implemented. Funding must move away from the present donor-controlled, corporate-driven climate finance system to realise the imperative of climate justice.

In the end, the lasting solution to the climate and broader ecological crisis is systemic change. The profit-driven and unsustainable models of growth under neoliberalism and monopoly capitalism must be abandoned. People’s rights, sovereignty, including their right to their environment and resources, should be at the front and center of development.

This can be achieved by democratising ownership and control over resources, especially in agriculture, transportation, energy, and finance. Removing unjust economic and trade policies that inhibit developing countries’ development and climate adaptation is necessary. For African peoples’ needs to be fulfilled amid ecological crisis, communities and their mass movements and organisations need to be at the helm of social and economic governance. #

Monitoring and review of development cooperation in the 2030 Agenda