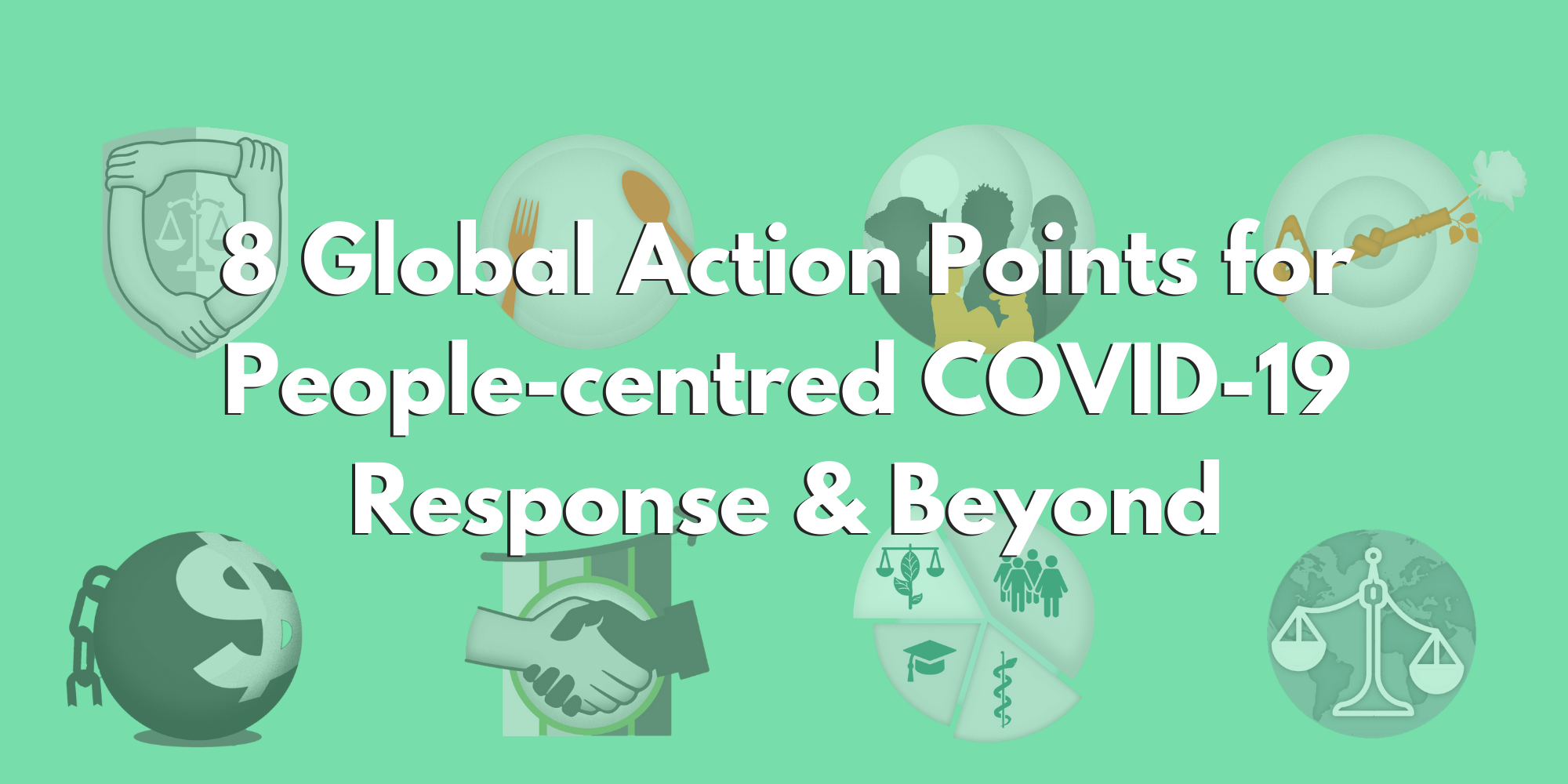 IBON International identified eight global action points that aim to directly address the rights, needs and welfare of Southern peoples amid the COVID-19 pandemic and beyond.

The COVID-19 pandemic has laid bare the failure of neoliberal economies of corporate giants to serve the interests of the majority, leaving millions in precarious economic situations, unable to provide for their basic needs, and with no access to essential services and healthcare. But it poses the biggest threat on marginalised groups and communities in the global South where healthcare systems are severely limited, such as peoples affected by militarist aggression. Moreover, Southern countries are burdened by debt and by other obligations under unfair trade agreements that could hamper their response to the pandemic. Hundreds of millions of lives are at risk if immediate actions are not taken. IBON International has identified eight global action points that aim to directly address the rights, needs and welfare of Southern peoples amid the COVID-19 pandemic and beyond.

1. Uphold and protect the full range of people’s rights, including the right to health and development

The pandemic further reveals the need to uphold and protect people’s economic, social, cultural as well as civil-political rights amid work closures and militarised lockdowns. The people’s right to health and to development is closely tied to working people’s rights and the right to social services, from free healthcare, water supply, and adequate mass housing. Vulnerable groups from informal workers, to the elderly, prisoners, and people in conflict-affected zones must be given attention. Health workers around the world, of which 70% are women, must be supported through necessary protective equipment, hazard pay, and other forms of support. States must create conditions for adequate and accessible public healthcare systems, with a corresponding health spending, and other fundamental rights.

The people’s right to health and to development is closely tied to working people’s rights and the right to social services, from free healthcare, water supply, and adequate mass housing. Health workers around the world, of which 70% are women, must be supported through necessary protective equipment, hazard pay, and other forms of support.

2. Guarantee assistance to and rights of peoples in precarious economic situations, including informal workers

In many economies, there are workers forced into conditions of not having steady and fixed income sources, as well as workers whose wages are insufficient for basic living standards. These include those without security of tenure, some agricultural workers, and informal workers such as cleaners, garbage collectors, and small vendors. They are referred to as the precariat, whose already precarious economic conditions would be severely worsened by work closures, lockdowns and limits to movement unless states guarantee adequate and urgent support as an emergency measure. Their basic rights as working people, to livelihoods, living wages, and the right to join in, and form, their own organisations and unions, must be guaranteed.

3. Empower people’s organisations and CSOs, especially at the community level

Organisations of workers, farmers, women, Indigenous Peoples, migrants, and rural and urban poor communities, must be empowered to substantively shape economic plans and health measures that affect them and to hold states accountable. Peoples’ creative, cooperative efforts are most valuable in times of crisis; they must be allowed to conduct initiatives to respond to grassroots needs, and such initiatives must be supported by national actors and the international community including through aid. States must foster people’s political participation such as through transparent and effective public information, not crack down on grassroots initiatives with threats of surveillance and repression.

All forms of military aggression against peoples must be stopped, and all governments must comply with the UN call for global ceasefire and focus all efforts and resources to COVID-19 response. Conflict across the world has collapsed economies and destroyed civilian facilities including hospitals. Health workers who should be exempt from attacks according to rules of war have also been targets of aggression. Ending all forms of military aggression and compliance to global ceasefire would allow and ease the mobility of aid and humanitarian workers to reach communities in need. Monitoring bodies should especially pay attention to global powers with vast military resources. Global powers must be held accountable not only for their own violations of the ceasefire, but for their support of governments or groups that commit similar violations. Coercive economic sanctions, such as unilateral embargoes that block finance sources, must be immediately and unconditionally lifted to enable affected countries to respond effectively to COVID-19.

Decades of neoliberal policies in the global South have encouraged funnelling billions to debt payments. Debt burdens are placed on working peoples, such as through unjust taxation, while they are forced to live in dire conditions vulnerable to communicable diseases. Thus immediate debt relief for Southern countries is imperative to the global COVID-19 response. This entails cancellation of debt payments that are due in 2020 with no interest, charges, and penalties. If debts were proven to be odious, illegitimate, or have caused long-term problems to Southern development, longer-term, even permanent, cancellations must also be options. New emergency assistance should be in the form of grants and not loans, and any relief or additional finance must be free from conditionalities. States must re-allocate the billions away from lenders’ interests towards health and social service spending, as well as social protection measures. They must repudiate odious and illegitimate debt such as those carried over from previous dictatorships.

Immediate debt relief for Southern countries is imperative to the global COVID-19 response. This entails cancellation of debt payments that are due in 2020 with no interest, charges, and penalties…Longer-term, even permanent, cancellations must also be options.

Donor countries must do their part by upholding their historical commitments and responsibility on ODA and development effectiveness to all Southern countries. Donor countries should reverse the decline in ODA as a share of Gross National Income (GNI) seen prior to the pandemic, and must fulfil the 0.7% GNI aid target in the form of unconditional grants. Donors must also consider aid flows directly to people’s organisations, community initiatives, and civil society responding to the pandemic. Most of Southern healthcare systems are ill equipped to respond to the peoples’ needs, risking millions of lives and could result to the disease circling back around the globe. States must ensure that people’s organisations have substantive voices in ensuring that aid flows to where they could fulfil people’s needs, and in determining aid allocations for emergency responses and long-term development. States must uphold the mandate of ODA for the public interest, and not use aid flows for commercial interests.

7. Use public funds to promote systemic change, not to bailout profiteers and polluters

Governments’ economic rescue packages today should not be used to further bailout corporate giants and banks, or to support projects that prop up extractivist and fossil fuel-driven paradigms. Instead, massive investments of public funds should be used to ensure a democratic paradigm shift of economies to act on climate change, while protecting people’s livelihoods and their rights. Climate finance, framed around principles of social equity, climate justice, ecological balance, and people’s rights, must primarily be through grants and not loans.

Unfair trade agreements that have resulted to negative economic and social impacts in Southern countries especially to the working class and other marginalised sectors must be reviewed and put to a halt amid the pandemic. Free trade agreements (FTA) generally only benefit developed countries and Southern countries’ elite-led governments with private interests, while the people suffer from a host of rights violations including the right to development. Trade liberalisation has also damaged domestic industries and, consequently, contributed to food insecurity and poverty. Southern countries should instead focus on sustainable domestic production and national industrialisation, while ensuring the safety and protection of farmers and workers, to cater to the needs of their populations amid the pandemic. Governments should stop negotiating all on-going trade and investment agreements, and should shift to an alternative trade and investment framework that prioritises people’s needs and development.