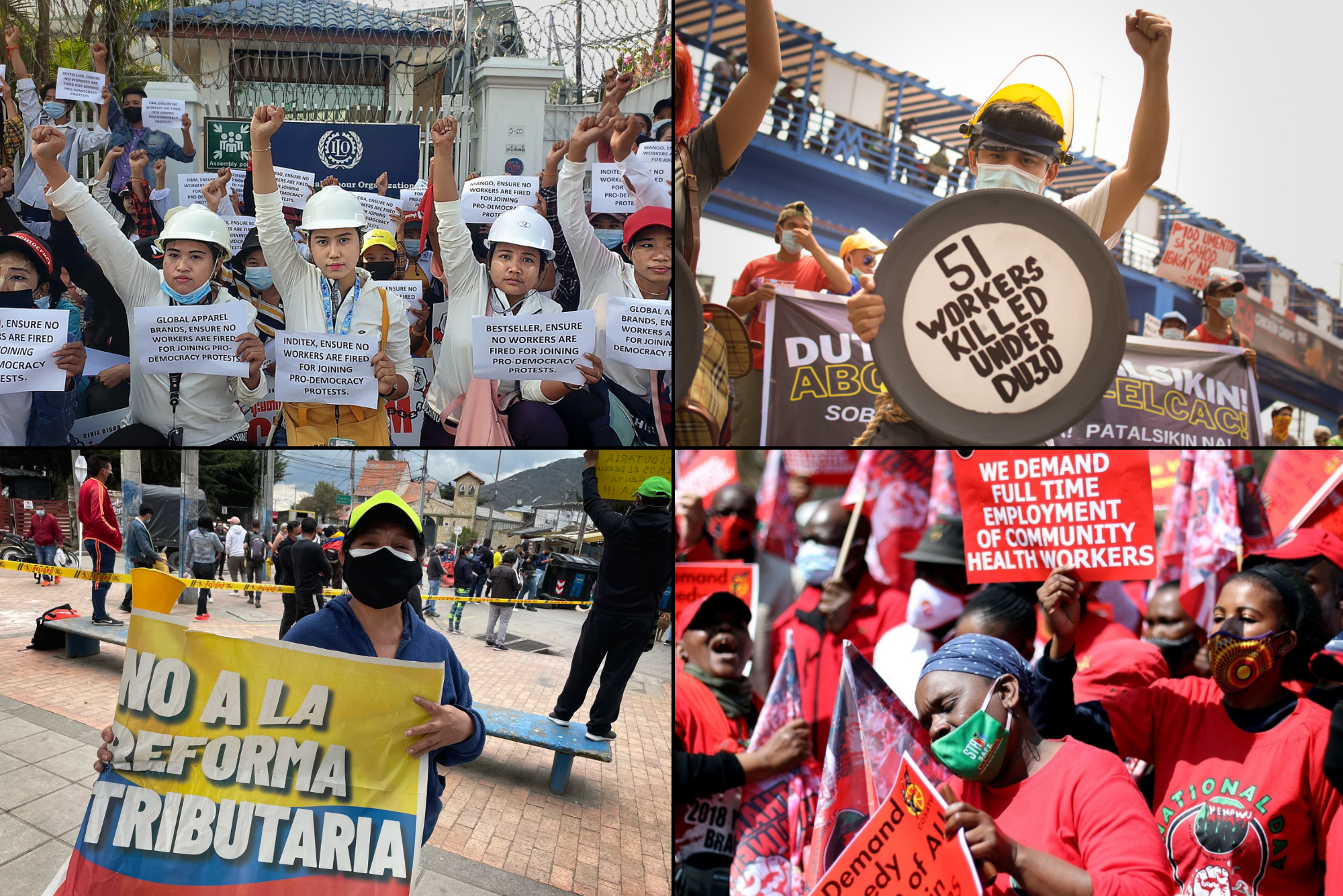 IBON International joins workers in demanding rights and people-centred solutions amid the economic crisis and pandemic, instead of profit-oriented responses that dispossess workers—the real producers of wealth—and deprive them of basic healthcare.

The first of May celebratesthe victories of the labour movement over the centuries, and more importantly is a testament to their continuing struggles amid neoliberal policies today. For decades, neoliberal globalisation and financialisation have shaped economic relations for the greater benefit of capital, and in so doing attacking organised workers’ actions and eroding past victories in asserting their rights—from minimum wages to job security, among others.

A global pandemic has accelerated the crisis under monopoly capitalism and has exposed neoliberal norms. Around the globe, working people are driven into deepening poverty. Losses of full-time jobs in 2020 were estimated to be at 255 million—equivalent to 8.8% of global working hours relative to the fourth quarter of 2019 and four times greater than during the 2009 Global Financial Crisis.[i] Even before the pandemic, 266 million workers were earning below minimum wage, and now wages are falling or growing sluggishly in around two-thirds of 136 countries, disproportionately affecting women.[ii]

Amid worsening situations for workers,global elites remain seemingly unaffected by the worst aspects of the pandemic. In fact, they are more than willing to continue to take advantage of the working classes by prioritising profit over people and attacking unions.Rising inequality and human rights abuses continue to spread across the globe concurrent with the pandemic.

IBON International joins workers, their unions, and movements in commemorating International Workers’ Day, or Labour Day. We affirm workers’ crucial role to bring about genuine social transformation. We also call on the international community to stand with the workers, especially of the global South, who are valiantly asserting their rights to face the headwinds of the crisis.

In Myanmar, rife with state violence following a military coup d’état and the effects of economic crisis, women garment workers are ever more determined to assert their rights and to topple the military dictatorship that monopolises and exploits people’s resources for foreign corporations. They marked the recent International Working Women’s Day with a strike for better working conditions, higher wages, and opposition to the current regime. In Indonesia, the Indonesian Labour Association Movement (GSBI) forges on, in its 24th year in defending rights, and has earlier condemned layoffs and wage cuts in a supplier company producing for Nike.[iii] They continue to demand the freedom for jailed GSBI unionists.

In Myanmar, rife with state violence following a military coup d’état and the effects of economic crisis, women garment workers are ever more determined to assert their rights and to topple the military dictatorship that monopolises and exploits people’s resources for foreign corporations.

In India, agricultural workers and farmers have continued to protest on national highways and even at the Food Corporation of India (FCI) offices,demanding an end to neoliberal agricultural laws that would rob them of their livelihoods. As India has emerged as among the worst-hit by the Coronavirus,[iv]around 40,000 dedicated protesters are still sitting out at the borders of Delhi[v], showing no signs of stopping as they push for the central government to establish minimum support price (MSP) for their crops and an overhaul of the crop-procurement system.

Meanwhile, the Latin American and Caribbean region has lost 26 million jobs amid the pandemic.[vi] Even so, in Colombia, large trade unions and rights groups held a nationwide strike on the 28th of April, a National Strike Day to protest unfair tax reforms and the government’s mishandling of the pandemic situation[vii]. Health workers in Argentina are blocking roads to a key shale oil and gas facility to demand immediate wage increases.[viii] In Chile, unions have called for a national strike on 30th of April for wage increases, emergency income support, and food price freezes,[ix] while mining unions press the government to allow early withdrawals from pensions.[x]

Most countries in the African region are suffering from second waves of the pandemic with some, such as Kenya, Egypt and Tunisia, having seen a third wave. Governments such as in Egypt have implemented measures such as hiring freezes[xi]. Despite this, trade unions in the region have become more assertive to fight for their rights over low wages. In South Africa, labour unions have threatened large strike action against railway company Transnet after negotiations broke down. Public-sector unions have warned of a “total shutdown of South Africa”[xii] following a wage dispute with the government,which purports to narrow the deficit and the debt-to-GDP ratio but at the expense of workers’ wages.

In the Philippines, workers continue to suffer from worsening economic conditions under the world’s longest lockdown under Philippine President Rodrigo Duterte. Recently, IBON Foundation has released estimates revealing 5.8 million Filipinos are unemployed, 18 million families are in poverty, and at least 33 million are starving.[xiii] Meanwhile, women continue to bear the brunt of the crisis.[xiv]With measly state support of PHP1000 (USD 20.67) cash aid, people have begun to organise “community pantries” in communities to offer food and other needs for free.

The Philippine government has targeted these mutual aid initiatives, ludicrously but dangerously linking them to communist rebels—a state practice which has de facto sanctioned killings and repression of union leaders. Undeterred, Filipino workers are resolute to fight for their rights amid worsening economic conditions and state tyranny. The first of March has seen garment factory workers from Hanes protest in front of their company’s office to demand job security after lay-offs of thousands. Workers, together with other social movements, are set to launch workers’ rallies this Labour Day in multiple cities.

We affirm workers’ crucial role to bring about genuine social transformation. We also call on the international community to stand with the workers, especially of the global South,who are valiantly asserting their rights to face the headwinds of the crisis.

As workers across the global South display continued resistance, IBON International joins them in demanding rights and people-centred solutions amid the economic crisis and pandemic, instead of profit-oriented responses that dispossess workers—the real producers of wealth—and deprive them of basic healthcare. We join them in demanding state accountability for rights violations against working people and unions,amid the tide of militarist rule. While international financial institutions, eager for an economic “recovery” that would maintain existing oppressive systems and power structures disregard people’s demands for system change, IBON International asserts that the strength of workers, farmers, fisherfolk, and Indigenous Peoples around the world would be essential to bring about true social transformation.

[i] ILO Monitor: COVID-19 and the world of work. Seventh edition

Resistance needs no permit: COP 21 opens with climate marches all over the world and the arrest of around 200 in Paris