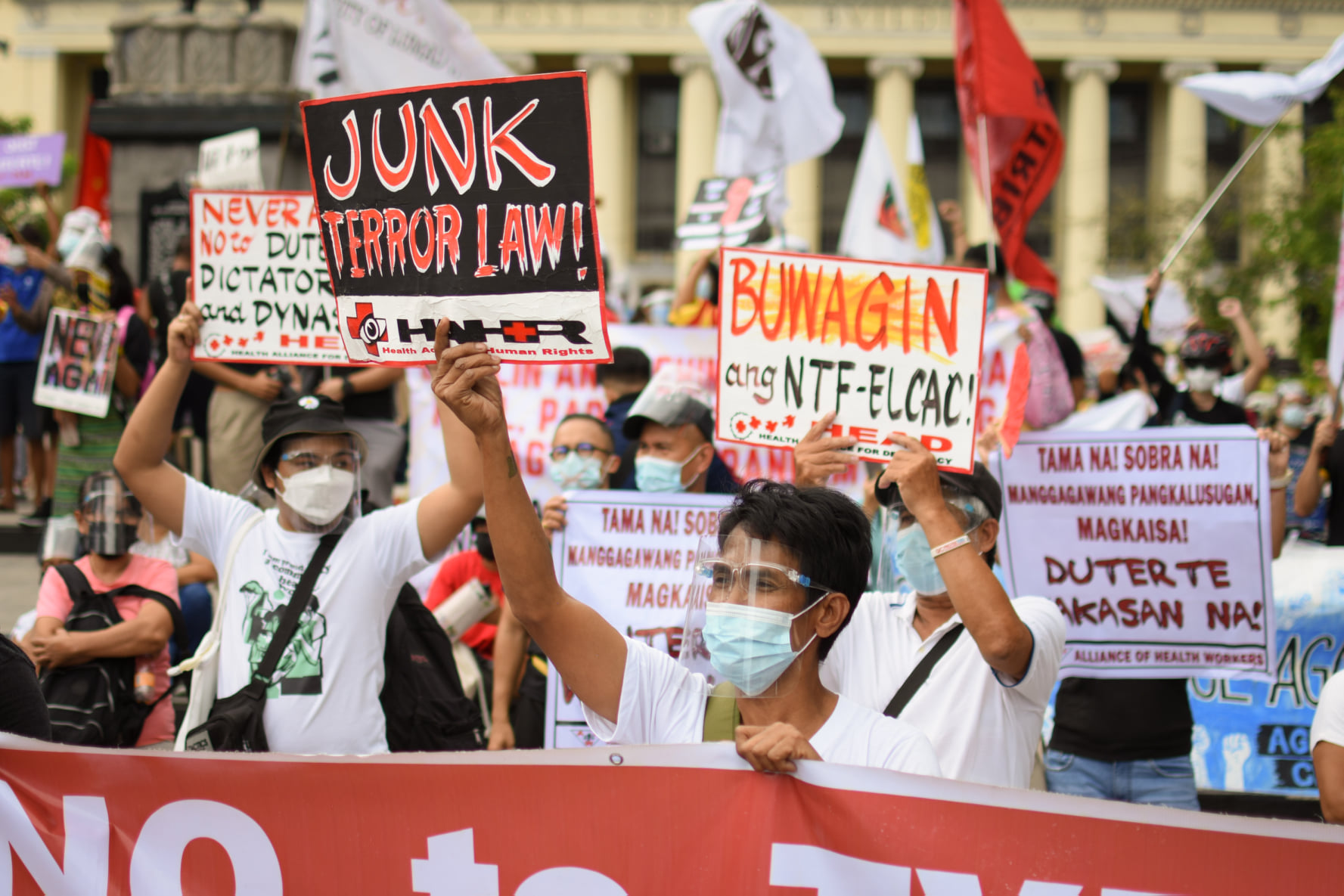 We join people’s resistance against state terror and calls for justice and accountability, and enjoin the international community to support the Filipino people’s fight. We condemn the brutal and rampant rights violations under Duterte, including attempts at a violent dispersal of the September 21 protests. We oppose the extension of Duterte’s rule, which would mean a continuing rights violations and criminal neglect of people’s needs similar to Marcos’ dictatorship.

At the 76th Session of the United Nations General Assembly, President Rodrigo Duterte sought to cover its record of rights violations by talking about creating “stronger partnerships” for the “protect[ion] of the rights of Filipinos.” His speech follows nationwide protests last September 21 on the 49th anniversary of the declaration of Martial Law by former dictator Ferdinand Marcos. Despite attempts by the police to break up the protests in Manila, people’s movements and a broad range of actors have triumphantly asserted their right to assemble. Movements have demanded an end to the ongoing state-sponsored killings and impunity under the Duterte administration, and their ilk’s appalling efforts to distort history and deodorise the similarly atrocious legacy of human rights violations under the deposed Marcos’ dictatorship.

IBON International joins the people’s mounting resistance against state terror and calls for justice and accountability, and enjoins the international community to support the Filipino people’s fight. We condemn the brutal and rampant rights violations under the current Duterte administration, including attempts at a violent dispersal of the September 21 protests. The current reign of impunity and the administration’s capture of redress mechanisms in the country continue to hinder the Filipino people’s prospects for justice, as evident in the Philippine justice department’s exclusion of victims’ voices in their drug war inquiry and the relentless attacks against activists.

We welcome the advancement of the International Criminal Court’s (ICC) investigation on the charges of crimes against humanity around the government’s so-called war on drugs. As a space for victims’ grievances otherwise deprived of justice in domestic courts, international measures could aid the victims in their struggle to prosecute Duterte and his accomplices for their crimes. In this light, we strongly condemn the administration’s attempts to shield their record of rights violations, especially by forbidding the entry of ICC investigators into the country.

As the 48th Regular Session of the United Nations Human Rights Council (UNHRC) is set to tackle the report of the Office of the High Commissioner on Human Rights (OHCHR) on its partnership with the Philippine government for the promotion of human rights, we urge the international community to join calls for the UNHRC to take decisive steps for upholding accountability, such as by conducting an independent probe on the Duterte administration’s rights violations.

We welcome the advancement of the ICC investigation on the charges of crimes against humanity around the government’s so-called war on drugs. We urge the international community to join calls for the UNHRC to take decisive steps for upholding accountability, such as by conducting an independent probe on the Duterte administration’s rights violations.

Workers, peasants, Indigenous Peoples, human rights defenders, peace consultants, people’s organisations, and civil society who fight for people’s rights and push for system change are even more threatened with state-sponsored violence with the Anti-Terrorism Act of 2020 and counter-insurgency operations. Duterte’s neoliberal policies have worsened the living conditions of workers and other marginalised sectors and furthered the exploitation of the country’s resources for corporate profit.

The Philippines is among the worst countries for workers: Labour group Kilusang Mayo Uno (KMU) filed a complaint against the Duterte government before the International Labor Organization (ILO), for violations of the freedom of association and the right to organise and collective bargaining. Fifty-six unionists have already been killed under his regime. The harassment and the pretexts used to repress trade unions, such as the red-tagging of the Wyeth Philippines Progressive Workers Union (WPPWU), have intensified during the pandemic.

Over 340 peasants, including petitioners against the Anti-Terrorism Act, have also been killed since Duterte took power. The Philippines has, again, been named as one of the world’s worst countries for land and environmental rights defenders, with at least 29 defenders murdered in 2020. Development worker and peasant rights advocate Elena Tijamo was abducted in June 2020 and was found dead on August 30, 2021. Human rights lawyer Rex Fernandez, who handled cases of enforced disappearances of activists, was shot dead last August 26. At least 64 prosecutors and judges have been killed under the Duterte administration. The so-called tokhang, or “house-to-house” police visits which became almost synonymous to the drug war killings, could again be used for political repression, as was the case in the Cordillera region in the Northern Philippines. A resolution was adopted to facilitate tokhang-style operations against “known members of left-leaning organisations”.

The Duterte government even aims to fortify its bloody counterinsurgency campaign with a 2022 budget proposal of PhP30.46 billion (USD 607.5 million) for the National Task Force to End Local Communist Armed Conflict (NTF-ELCAC) – a 62-percent increase from its PhP19 billion (USD379.6 million) 2021 budget. Instead of pursuing peace negotiations to resolve the socio-economic roots of longstanding conflict in the country, the administration uses the NTF-ELCAC as a tool for state terror and to quell all forms of dissent. It continues to target unarmed civilians and legal organisations through virulent red-tagging, arrests, and detention on trumped-up charges, and even state-sponsored massacres.

Seven peace consultants of the National Democratic Front of the Philippines (NDFP) have been killed by state security forces since 2017. Farmers in rural communities have also been harassed and forced by state agents to surrender as guerrillas as part of the NTF-ELCAC’s so-called amnesty programme. Through the NTF-ELCAC, even the Leyte Center for Development (LCDE), a disaster response organisation, was red-tagged and marked for repression.

As Filipinos and their social and economic rights suffer from failed lockdowns of a military-led pandemic task force, the government is under scrutiny for corruption and mismanagement of billions of pesos of COVID-19 response funds. A total of PhP124.65 billion (USD2.5 billion) from nine government agencies were flagged as questionable by state auditors, including PhP95.45 million (USD1.9 million) worth of procurement of highly-priced COVID-19 supplies from private suppliers. Only 4% of the proposed 2022 national budget was earmarked for pandemic response, as defense and big-ticket infrastructure were prioritised. Funding for several public hospitals and the country’s main COVID-19 testing center was slashed, despite the steady rise of infections and the mass resignation of health workers due to inhumane working conditions and unjust compensation.

Instead of pursuing peace negotiations to resolve the socio-economic roots of longstanding conflict in the country, the administration uses the NTF-ELCAC as a tool for state terror and to quell all forms of dissent.

As his term nears its end in 2022, Duterte has expressed his intent for himself or his allies to stay in power. We join the people’s opposition of the extension of Duterte’s rule, which would mean a continuing rights violations and criminal neglect of people’s needs similar to Marcos’ brutal two-decade dictatorship.

We support the people’s calls to defund and abolish the NTF-ELCAC, and re-channel its funds to health, socioeconomic relief, and agricultural production subsidies. We reiterate the urgent call, as articulated by people’s efforts such as Investigate PH, for a UN probe on the dire rights situation in the country. We urge states and international institutions to halt bilateral and multilateral loans and grants, and military assistance to the Philippine government amid its rampant rights violations. These resources would only be used to intensify the government’s attacks against the people as shown in its militarist COVID-19 response and the bloated budget of the NTF-ELCAC.

We call on the international community to support actions to hold the Duterte administration to account. Against the darkest periods of Martial Law and the current rule of state terror, these actions demonstrate the people’s longstanding resistance against repression and struggle for genuine peace and development. The Filipino people’s struggle against repression and militarism draws from a commitment to universal principles of human rights, civil liberties, and democracy. Victory against the Duterte regime is a victory for all peoples fighting for social justice. ###