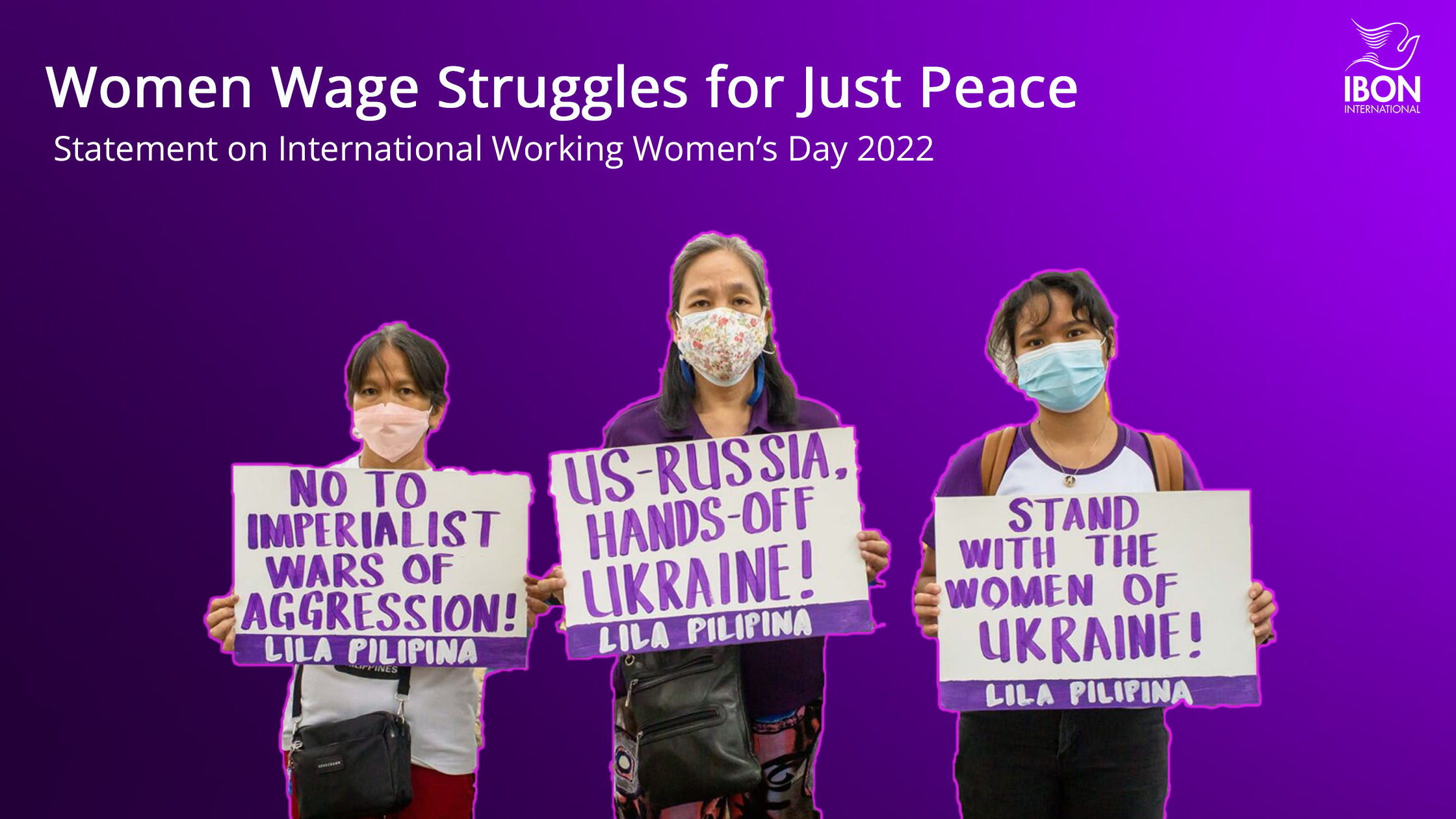 The 2022 International Working Women’s Day comes at the heels of the escalation of conflict in Ukraine, foregrounding the horrific threat of global powers’ wars to humanity. Women’s movements’ demand for “bread and peace” against the First World War still resounds today. IBON International honours working women’s historic roles and heroic sacrifices in resisting wars, occupations, militarist aggression, and dictatorships. We stand in solidarity with the continuing struggles of women, along with working and marginalised peoples, for peace founded on social justice. We call on states to uphold people’s rights and sovereignty amid multiple crises, and to heed long-term demands to address inequities and injustices.

In late February, Russia invaded Ukraine to secure its interests against the expansion of the United States (US) and the North Atlantic Treaty Organization (NATO) over Eastern Europe. Amid these global powers’ struggle, the Russian invasion has killed over 300 civilians, including 20 children, and injured hundreds. Over 1.5 million people have fled Ukraine due to the conflict, of which two-thirds are women and children. Prior to the Russian military offensive, the conflict in Ukraine between the Zelenskyy government and groups struggling for self-determination in the Donbas region has killed over 14,000 people. The US and its NATO allies condemned the invasion even as they poured military resources to the Ukrainian government, and has been fanning the flames of war through the ongoing US War on Terror across the globe.

We stand in solidarity with women along with the working and marginalised peoples of Ukraine who will bear the losses amid aggression between the US- and NATO-backed Zelenskyy regime and Russia. We recognise local people’s struggles for self-determination. We condemn the Russian invasion of Ukraine and the roles of the US and NATO in exacerbating the conflict in Ukraine through military support of the Zelenskyy regime to pursue their own economic and geopolitical interests.

Wars and militarist aggression violate women’s fundamental human right to life and destroy all societal foundations for the exercise of basic human rights. In contexts of conflict, people are killed, driven away from their homes, and separated from their families. Livelihoods, social infrastructure, and natural resources are destroyed. Life-saving maternal and reproductive healthcare services become inaccessible to women in conflict settings, where over 60% of preventable maternal deaths occur. Women and girls in conflict settings are vulnerable to trafficking and sexual exploitation. Globally, 7 out of 10 trafficking victims are women and girls. Ultimately, all forms of militarist aggressions undermine people’s sovereignty, rights to self-determination and development.

Global powers, with US in the lead, have used wars, occupations, sanctions and militarist aggressions to secure corporate and elite interests. Amid the conflict in Ukraine, stocks have been booming for world’s biggest arms producers such as US-based Northrop Grumman, Lockheed Martin, Huntington Ingalls, General Dynamics, and Raytheon. Profits of arms companies did not dip throughout the pandemic and even increased by 1.3% to USD531 billion in 2020.

Elsewhere in the global South, women who fight for rights face the wrath of military dictatorships. Under the junta in Myanmar, state forces bomb and attack ethnic communities with impunity. On March 5, bombing in Karen communities killed two women and three children. One of the women killed was pregnant. Women political prisoners with disabilities and diseases languish in jails without medical assistance. Dr. Htar Htar Lin, the health official who led the country’s COVID-19 vaccine programme, was arrested and charged with high treason for distributing public resources to local healthcare facilities. In a desperate attempt to quell Myanmar women’s fiery opposition to the brutal military dictatorship, the state punishes women who express solidarity to victims of militarist aggression. Two female university students face years of imprisonment for “terrorism” after donating 5,000 kyat (less than USD 3) to communities displaced by militarist attacks.

In the Philippines, women’s rights have been constantly under attack, and are further threatened by the electoral alliance of the successors of former dictator Ferdinand Marcos and incumbent President Rodrigo Duterte. Rights violations have continued in the last months of the Duterte administration. The arrest of land rights activist Harlyn Balora by a battalion of 500 military forces last February 19 demonstrates Duterte’s relentless crackdown against women’s movements through counterinsurgency and “anti-terrorism”. Gender-based violence against women and girls is the standard procedure of state forces in the counterinsurgency campaign and even encouraged by Duterte. Balora was insulted with sexual slurs by military forces that arrested her. While the Duterte administration and its National Task Force to End Local Communist Armed Conflict employ “red-tagging” to vilify women activists and their organisations, state attacks on women activists such as Balora undermine people’s efforts to address the long-running land problem as a root cause of generational inequities, injustices, and conflict in the country.

State attacks on women activists such as Harlyn Balora undermine people’s efforts to address the long-running land problem as a root cause of generational inequities, injustices, and conflict in the country.

The day before Balora’s arrest, state forces arrested Dr. Natividad Castro, a volunteer doctor to rural communities, on trumped-up charges. The Philippine military killed woman health worker Elgyn Balonga, along with Lumad indigenous rights advocates Chad Booc and Gelejurain Ngujo II, last February 24. Chad Booc was also a petitioner against the Anti-Terror Law. Also, in late-February, police arrested Agnes Mesina, a woman human rights defender and regional coordinator of a coalition of progressive party-lists, during an outreach activity for militarised communities. Mesina was immediately released, after proving that the charges against her were false and already dismissed in court.

In solidarity with women’s resistance

Today, women’s movements show that pursuing genuine peace entails collective assertions for rights and sovereignty. Peace cannot be preached by global powers that profit from wars. We join peoples’ calls to end continuing terror wars and sanctions of the US and its allies against nations in the global South. Currently, the US has counterterrorism efforts in over 80 countries, and implements sanctions against over 40 developing countries. All forms of militarist aggression erode conditions for the advancement of women’s rights and development.

We join calls for the immediate release of all political prisoners who were unjustly arrested in the course of struggles for rights, sovereignty, and liberation. We support people’s struggles to address landlessness and peasants’ grievances as a foundation for genuine peace. Redistributing land and other productive resources would be the basis for the development of local agricultural production and industrial capacities that would ensure people’s needs and development.

Oppressed peoples who are forced to take up arms to defend their dignity cannot simply be ordered to surrender without addressing their economic and political conditions. Eradicating poverty, redistributing productive resources, affirming people’s sovereignty, and undoing exploitative conditions, are all prerequisites to establishing just peace. #

Politics, economics and climate crisis: the continuous threats to a fisherfolk community that never stops fighting

Global Partnership Must Uphold Democratic Ownership Against Profiteering and Militarization