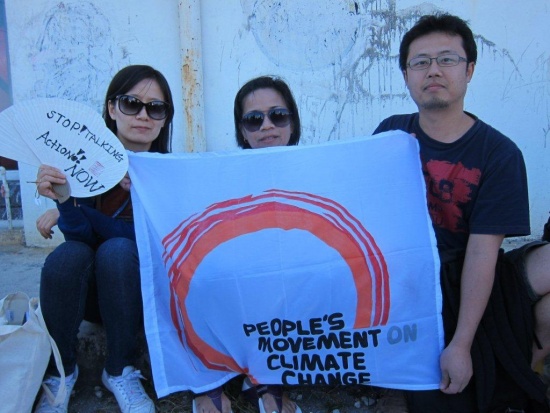 Thousands march the streets of Cancun and call for ‘System Change, Not Climate Change’
[[{“type”:”media”,”view_mode”:”media_large”,”fid”:”83″,”attributes”:{“alt”:””,”class”:”media-image”,”style”:”width: 350px; height: 263px; margin: 5px; float: right;”,”typeof”:”foaf:Image”}}]]
As the world's leaders gather at the Moon Palace Hotel in Cancun, Mexico for the 16th COP of the United Nations Framework Convention on Climate Change, thousands of peasants, indigenous peoples, youth, women, workers, advocates and many other sectors and communities from all over the world marched the streets of downtown Cancun this morning to call for 'system change, not climate change.
Numbering between 5,000-7,000 demonstrators gathered at the Glorieta del Albanil and marched towards the Plaza de la Republica this morning. The marchers carried banners, placards, colourful festoons to show their discontentment with the way the official UNFCCC negotiations have been dangerously moving towards the adoption of the Copenhagen Accord as the framework for negotiations, which means that there will be no binding
commitments from big, industrialized countries to reduce emissions. The UNFCCC talks are also going the direction of promoting false solutions to
the climate crisis such as carbon markets, technological quick-fixes and the further intensification of industrial agriculture with a greater role for corporate agribusiness.
http://peopleresist.net/news/164-thousands-march-in-cancun-dec-7
Tags: Cancun, climate change, COP16, Mexico, protest, UNFCCC