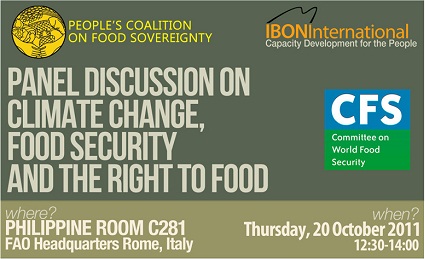 Editor’s note:  The People’s Coalition on Food Sovereignty (PCFS) posted on its website (http://foodsov.org/index.php/pcfs-news/6-latest-news/15-october-16-2011-international-day-of-action-) a call for an International Day of Action on October 16, World Food Day.  We are reposting it on the IBON [[{“type”:”media”,”view_mode”:”media_large”,”fid”:”118″,”attributes”:{“alt”:””,”class”:”media-image”,”height”:”438″,”style”:”font-size: 12px; width: 310px; height: 438px; margin: 10px; float: right;”,”typeof”:”foaf:Image”,”width”:”310″}}]]International website, with the additional information that on October 20, PCFS and IBON will hold a panel discussion on Climate Change, Food Security and the Right to Food during the 37th session of the Committee on World Food Security at the FAO Headquarters in Rome, Italy. Resource speakers will come from IBON, PCFS, Eastern and Southern Africa Farmers’ Forum (ESAFF), Pesticide Action Network – Asia and the Pacific (PAN-AP), and the Global Donor Platform for Rural Development (GDPRD).

On October 16, the Food and Agriculture Organization (FAO) and United Nations (UN) member states will commemorate the World Food Day through the 37th Session of the World Committee on Food Security. The theme chosen for this year’s observance is ‘FOOD PRICES  – FROM CRISIS TO STABILITY.’ Such is an ironic theme given the fact that the price of oil has continuously surged; the credit crunch and unemployment rise have run unabated globally; climate crisis has devastated livelihoods and crops especially in South Asia and Eastern Europe; and the food price index has increased more steeply at the start of the year compared to the 2008 world food crisis.
For the People's Coalition on Food Sovereignty (PCFS) and its network, World Food Day—or more aptly, World Foodless Day—has always been an occasion to critique and pose sustainable alternatives to the fundamental problems besetting agriculture and the global food system, which have placed more than a billion people in abject poverty and hunger; to protest the neo-liberal policies imposed by monopoly capitalist countries, international financial institutions and transnational agro-corporations on developing countries for their hegemonic profiteering interest; and to foster unity among the peoples to continue promoting and developing the struggle for food sovereignty.
On this World Foodless Day, we call on all concerned organizations to conduct mass actions and other public awareness activities in their respective countries to highlight the resistance of the people against the havoc created by corporate globalization and neo-liberal policies in agriculture, the environment, and the global food system. We should emphasize the wanton violations being inflicted upon the rights of the people and the unbearable condition that they now live through in the worsening multiple crises across the globe.
To become part of the International Day of Action, we call on every organization to register their plans for the upcoming World Foodless Day and send a copy of their statements, posters, flyers and other materials that would contribute in demonstrating the growing discontent and resistance from different parts of the world. We shall then consolidate all the planned activities and related materials and send it to other networks and concerned international institutions.
We will be looking forward to hear from you and we hope for the success of your endeavors.
Tags: FAO, food sovereignty, Italy, PCFS, Rome, UN, World Food Day

Towards people-powered sustainable consumption and production in Asia-Pacific