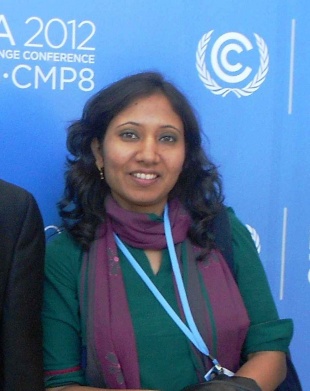 Farjana Akter of VOICE (Bangladesh) writes a pithy and passionate piece for urgent climate action, saying that "exercising rights and justice at their maximum standard are the expectations of the people during the climate talks in Doha."

The COP 18 opened on 26th November with the demand from the Least Developed Countries (LDCs) that “Kyoto is essential for a successful outcome in Doha”.  The LDC group, which is composed of 48 nations, represents the most vulnerable countries in terms of catastrophic climate change impacts. Millions of people in LDCs have been experiencing extreme and often disastrous weather conditions for which so called developed and rich countries (Annex I countries) are responsible due to their massive GHG emissions. We, the people from LDCs, are calling to the rich and developed nations to uphold their spirit of responsibility for the damage they have been doing to the rest of the world and to recognize the urgency of the issues related to climate change for the sake of greater human interest and justice.

The first and foremost urgent action is to extend a second commitment period of the Kyoto Protocol for a “length of five years to avoid locking-in insufficient mitigation ambition”. It is the most significant legally binding international agreement concerning the targets for reducing carbon emission. There should be specific benchmarks and clear indications about the pledge of emissions reductions and required actions to hold down global temperatures below the target of a 1.5 degree rise.
The second important and critical issue is climate finance. The responsibility of climate finance should be on the basis of countries’ differentiated responsibility for climate change, and their obligation to all climate-affected communities around the world. During the COP15 climate talks in Copenhagen in 2009, Annex I countries agreed to provide USD30 billion as “fast-start finance” for the period up to 2012 (which is going to end soon), and also established a Green Climate Fund (GCF) intended to be USD100 billion per year to be raised by 2020 for the mitigation and adaptation efforts of climate vulnerable countries. A climate finance roadmap is essential. It is needed from 2013 to 2020 to provide new, additional and predictable public finance to developing countries. Developed countries should increase public finance contributions from USD30 billion to a minimum of USD100 billion per year from 2013 to 2020.
However, the new GCF is not without concerns. It is supposed to begin implementation towards low-emission and climate-resilient development pathways by providing support to developing countries. But we need to be careful and aware of the trap of climate finance. Climate finance should neither be a substitute for minimizing carbon emissions nor for diminishing overseas development assistance (ODA). Developing countries also expect and are entitled to a fair distribution of funds, backed by transparency and accountability, and the participation of all in international climate financing decision-making. Moreover, International financial Institutions (IFIs) such as the World Bank (WB) should not be in the driving seat of managing climate fund at the country level. This role should be for developing countries themselves.
In the opening ceremony of COP18, the LDC group called on developed countries to “finalize all outstanding issues including the functioning of the technology mechanism in order to enable the technology mechanism to be fully operational from early 2013”.
To save the Mother Earth, it is indispensable that there is a change away from the existing unjust and undemocratic system that has damaged and continues to damage the world and put humanity in utmost danger.  World leaders should realize this, and be responsible and politically committed towards saving millions of lives and the livelihoods of people around the world. Exercising rights and justice at their maximum standard are the expectations of the people during the climate talks in Doha. ###
Tags: Bangladesh, climate change, COP18, Doha, least developed countries, VOICE

Patents over Patients: How Big Pharma profits from the pandemic