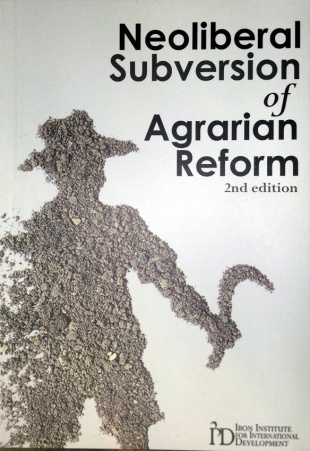 Neoliberal Subversion of Agrarian Reform, 2nd ed.
Full Text:
[[{“type”:”media”,”view_mode”:”media_large”,”fid”:”395″,”attributes”:{“alt”:””,”class”:”media-image”,”height”:”451″,”style”:”text-align: center; width: 275px; height: 350px; float: right;”,”typeof”:”foaf:Image”,”width”:”310″}}]]
October 1, 2014 – A new edition of the book Neoliberal Subversion of Agrarian Reform, first published eight years ago, is now available after its simultaneous double launch in Penang, Malaysia and Yogyakarta, Indonesia on September 25.
The book was launched by the People’s Coalition on Food Sovereignty (PCFS) together with IBON International and IBON Institute for International Development (I3D) in cooperation with the Pesticide Action Network – Asia Pacific (PAN-AP) and GRAIN-Asia.
Neoliberal Subversion of Agrarian Reform was first published in 2006 by the Asia Pacific Research Network (APRN) and partners – Roots for Equity, Kilusang Magbubukid ng Pilipinas (KMP), Institute for Motivating Self-Employment (IMSE), All Nepal Peasant’s Federation (ANPFa), Tamil Nadu Women’s Forum (TNWF), IBON Foundation, Aliansi Gerakan Reforma Agraria (AGRA) and Center for Human Rights and Development (CHRD).
In the new 2nd edition, PCFS together with IBON International and I3D have updated parts of the book and included articles from Kenya and Guatemala.
The book launch in Penang culminated with a militant remark by Ms. Sarojeni Rengam, Executive Director of PAN-AP and member of the PCFS Asia Steering Council. She said the book was especially important to the peasantry in their continuing struggle for genuine agrarian reform.
A representative from the Tamil Nadu Women’s Forum (TNWF) shared the struggles of Dalit women against land grabbing in Panchami. She expressed the importance of organizations in empowering women in their communities.
Mr. Wali Haider of Pakistan-based Roots for Equity in Pakistan, who also serves as the PCFS-Asia Focal Person, shared the historical background of the agrarian reform in his country. He said there is indeed no true land reform in Pakistan. As a semi-feudal and semi-capitalist country, the lands are being monopolized by corporations in partnership with local landlords. “We are fighting for a genuine agrarian reform,” Haider said.
The other launch in Yogyakarta, Indonesia was in cooperation with GRAIN-Asia during their regional workshop on Supermarket Expansion in Asia held from September 25-27. Mr. Rafael "Ka Paeng" Mariano of Kilusang Magbubukid ng Pilipinas (KMP, or Peasant Movement of the Philippines) explained that KMP’s contribution to the book focused on the peasants' struggle for genuine agrarian reform in his country. He reiterated that market expansion across continents is a clear impact of neoliberal policies and corporate control in food, agriculture and rural development.
Mr. Jodel Dacara of APRN enjoined everyone to read, spread and act on people's struggle for food sovereignty. Each of around 30 participants representing 22 organizations working on the rising expansion of superstores in Australasia, was given a copy of the book. ###
Tags: agrarian reform, book launch, NGOs, PCFS

Towards people-powered sustainable consumption and production in Asia-Pacific