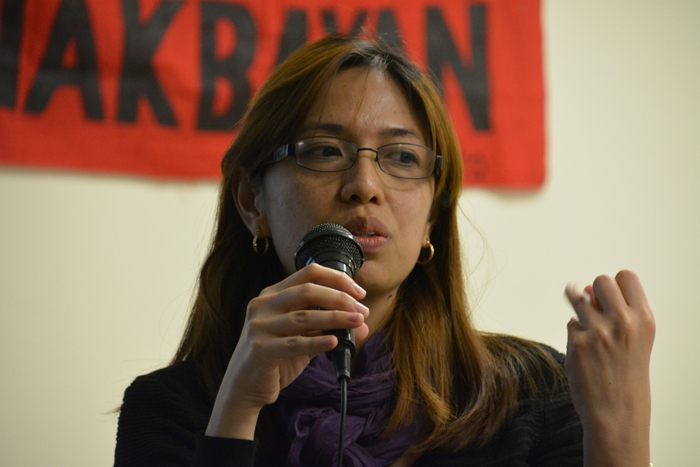 TORONTO–The Trans-Pacific Partnership Agreement (TPPA), a multilateral free trade agreement (FTA) in Asia-Pacific being negotiated by 12 countries (the United States, Australia, New Zealand, Japan, Singapore, Malaysia, Brunei, Vietnam, Chile, Canada, Mexico and Peru), was the subject of the public forum, "What’s wrong with partnership? An Asian perspective on the Trans-Pacific Partnership."
Organized by BAYAN Canada in Toronto and the International Coalition for Human Rights in the Philippines, the event was held last March 31 at the Ontario Public Service Employees Union Membership Centre with Ms. Amy Padilla, Deputy Director of IBON International, as guest speaker.
The TPP with the US at the helm, aims to achieve smooth economic integration in the Asia-Pacific region through intensified trade liberalization. Padilla said that for the US that is deeply shaken by the current global crisis, the TPPA is “important … in its rebalancing strategy in the Asia-Pacific.” The US will utilize the TPPA, combined with increased military presence, to counter the expanding influence of China in the region, according to Padilla. The TPP is a US strategy to take over Asia.
She cited TPPA draft documents leaked by Wikileaks that contain provisions requiring “member-countries to remove any remaining barriers to investments, to strictly enforce intellectual property laws that would raise pharmaceutical costs and stifle digital innovation and freedom of expression, and to allow private corporations to sue states before an international tribunal.” In effect, countries joining the TPPA will have to “surrender big chunks of their national sovereignty to the trade pact’s imperialist masterminds,” according to the anti-imperialist International League of People’s Struggles (ILPS).
“The Philippines is not yet a TPPA negotiating member state,” Padilla stated, “but it wants to come in.” Thus the push for charter change (cha-cha) coming from the Lower House of the Congress in tandem with the Joint Foreign Chambers of Commerce in the Philippines led by the American Chamber of Commerce, Office of the US Trade Representative, the USAID and the US Embassy.
Padilla cited the USAID-funded Arangkada Philippines Project (TAPP) that “advocates” 471 policy recommendations promoting the interests of foreign corporations in the country while undermining the national economy, facilitating greater plunder of the national patrimony, and intensifying the attack on the people’s rights and welfare. Here, whatever remain of the protectionist provisions of the Philippine Constitution, are identified as impediments to foreign capital that must be “bypassed, reformed, revised or removed.”
Dr. Philip Kelly of the York Centre for Asian Research (YCAR) pointed to the impact of the TPP on the environment. According to Kelly, the TPP will ensure that all environmental policies do not hurt trade and investment. It cannot and does not pretend to help reduce emissions or protect the earth. The only winner from this situation is climate change.
In its statement on the TPP, the Council of Canadians says: “… the TPP is being resisted by people across all participating countries because of how it will lock-in a myopic type of corporate globalization that is the main cause of runaway climate change and which has done little to create good, sustainable jobs or reduce poverty worldwide. People working across borders fought and defeated the Free Trade Area of the Americas. Our goal is to make sure the TPP suffers the same fate.”
The event was co-sponsored by the YCAR, OPSEU, the CUPE Free School, Philippine Advancement Through Arts and Culture, and the Filipino Christian Fellowship. IBON International is a not-for-profit international non-government organisation that provides capacity building to grassroots groups, social movements, NGOs and advocates especially in the underdeveloped and developing countries. IBON provides trainings and workshops, researches and policy analyses and support for social movement building. It promotes democracy and human rights by advocating for a people-centred development framework.
___________________________________________________________________________________
Note: This article was originally posted on http://philippinereporter.com/2015/04/10/trans-pacific-partnership-u-s-strategy-to-take-over-asia/
Tags: FTAs, IBON International, TPP, US