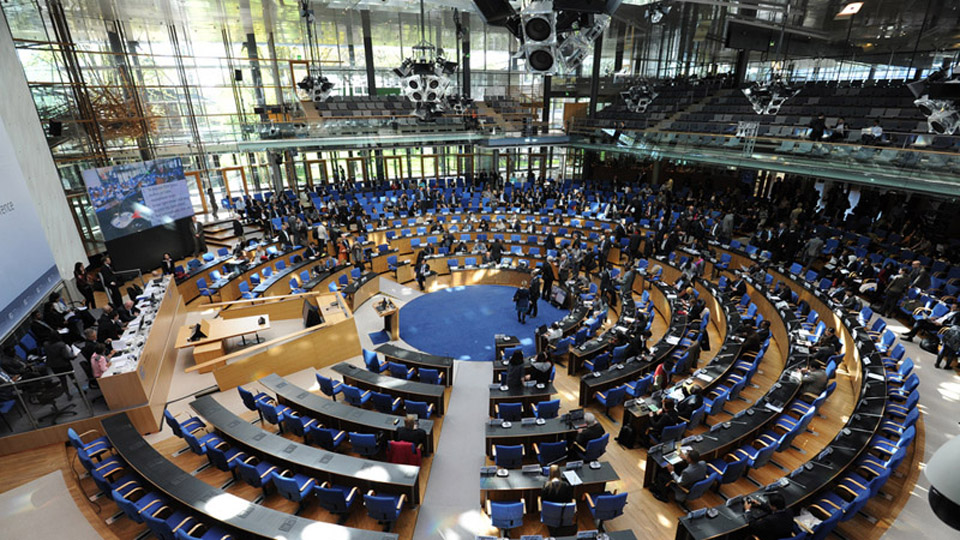 [[{“type”:”media”,”view_mode”:”media_large”,”fid”:”892″,”attributes”:{“alt”:””,”class”:”media-image”,”height”:”270″,”style”:”width: 350px; height: 197px; margin: 5px; float: right;”,”typeof”:”foaf:Image”,”width”:”480″}}]]Nearly 200 world leaders are meeting in Bonn, Germany from June 1 – 11, 2015 to whittle down a 90-page draft negotiating text into a more concise document to be signed in Paris on the 21st Conference of Parties (COP) to the United Nations Framework Convention on Climate Change (UNFCCC) later this year.
Negotiators will have to sift through the draft Geneva text that contains all kinds of options to reduce greenhouse gas emissions to limit the global mean temperature rise to 1.5°C to prevent irreversible and catastrophic climate change.
The Ad Hoc Working Group on the Durban Platform for Enhanced Action (ADP) resumed its work at the ninth part of its second session in Bonn on June 1, 2015.
The Group of 77 (G77) and China read their statements during the opening plenary which were then supported by other groupings – developing country groups such as the African Group, the Least Developed Countries (LDCs), the Alliance of Small Island States (AOSIS), the Like Minded Developing Countries (LMDC), South Africa, Brazil, China, and India (BASIC).
South Africa pointed out that to achieve a legally binding 2015 agreement, parties must be able to agree and commit, under the rules and principles of the Convention, on the elements of inter alia mitigation, adaptation, loss and damage, finance, technology development and transfer, capacity building and transparency of action and support.
However, it looks like a legally binding deal is far off as China and the United States, both top emitters, want a deal that is based on national pledges anchored in domestic laws. The goal to ensure each country’s commitment in emissions reduction thru the intended nationally determined contributions (INDCs) diminish historical responsibility and require developing countries to mitigate without having enough finance and technology, while developed countries are not committing to provide finance and technology in their INDCs. So far, only 40 countries have submitted their reduction plans to the United Nations.
On the issue of climate finance, the commitment made in Copenhagen for developed countries to raise USD 100 billion per year until 2020 to finance climate change mitigation and adaptation still remains a contentious issue. Developing countries now want governments from developed countries to provide finance beyond 2020, but these rich countries are contesting that financing should come from the public and private sources.
The Bonn Climate Change Conference will last for two weeks with succeeding sessions in September and October. French Foreign Minister Laurent Fabius, incoming President of the UNFCCC COP 21, pronounced that he does not want a new climate agreement to be “pulled out of his hat” and to achieve a pre-agreement in the ADP 4 in October 2015.
Meanwhile, amidst all the debates, grassroots organizations and civil society organizations – IBON CJ partners in Senegal, Kenya, Nepal, Philippines, Bolivia and elsewhere are strengthening the movement for climate justice through various initiatives for capacity building and mass campaigns and struggles in their own communities and countries.
*IBON CJ Watch offers timely updates on various climate related issues and activities that must be followed for more informed climate justice advocacy and engagement.
Upcoming events to follow:
IBON_CJ_Watch_June_2015.pdf
Tags: Bonn, calendar, CJ watch, climate change, climate crisis, conference, COP21, Durban Platform, events, Germany, Paris, UNFCCC

To what extent could big business forward “sustainable consumption and production”?

Truthtellers Under Siege: Worsening Media Repression under the Duterte Administration