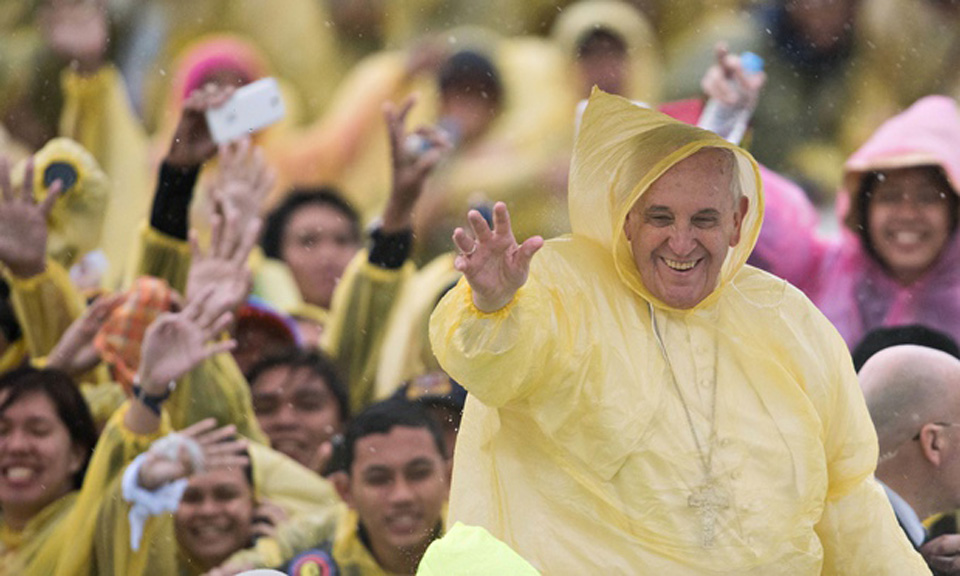 PAPAL ENCYCLICAL AFFIRMS CLIMATE JUSTICE
AND CALLS ON WORLDS' PEOPLES TO SURGE TOWARD A BETTER FUTURE
[[{“type”:”media”,”view_mode”:”media_large”,”fid”:”895″,”attributes”:{“alt”:””,”class”:”media-image”,”height”:”288″,”style”:”width: 350px; height: 210px; margin: 5px; float: right;”,”typeof”:”foaf:Image”,”width”:”480″}}]]
Global Peoples’ Surge, in solidarity with faith-based organizations and people’s movements around the world, applauds the firm stance of His Holiness Pope Francis on the issue of climate change. We affirm Pope Francis’ position that climate change is an issue of morality and social justice because of the devastating impacts, not only on the environment, but also on the poor and marginalized people of the world.
The world is already experiencing the effects of climate change in the more frequent extreme weather events, sea level rises, shrinking glacier volumes, and their disastrous results in terms of the destruction of ecosystems, loss of biodiversity, dislocation of human communities, deaths and injuries, adverse health effects, and dwindling agricultural production and food yields.
Global warming and climate change have emerged with the industrialization of the world, the global addiction to carbon based fuels and an economic system that has privileged private gain and corporate profit. These are the same factors that continue to aggravate climate change and obstruct governments from taking more concerted action for the greater good of our planet and its people.
The current globalized system transgresses planetary boundaries and allows reckless extraction, production, consumption and waste for unending growth in profits, while at the same time undermining human dignity and abrogating corporate social responsibilities. The profits from this system benefit only the richest one per cent who now obscenely controls nearly half of the global wealth.
The voracious plunder and exploitation of the planet’s natural resources, the international exploitation of the economies of poor and developing countries, and the increasing displacement of poor marginalized communities mean that the poor are increasingly the ones most vulnerable and at risk from climate change effects.
The massive plunder and exploitation of the world’s resources by transnational corporations (TNCs), and the persistent land grabbing and pollution by mining companies, fossil-fuel based energy corporations, bio-fuels plantations, and other large commercial agricultural producers, are increasingly displacing marginalized poor communities, especially indigenous peoples, and forcing them into situations where their vulnerability to climate change effects become more acute and extreme.
Under the system of neoliberal globalization, the rapacious and global exploitation of nature side by side with the intensifying exploitation of the poor are deepening structural inequalities and exacerbating the vulnerability of the poor to the impacts of climate change. Poor people from climate impacted communities that bear the brunt of neoliberal globalization and climate change have no other option but to fight for a better future.
The much awaited publication of the Pope’s encyclical letter on climate change takes the issue of climate change and social justice further into the public’s consciousness. The Pope aims to influence governments and corporations in time before the 21st Conference of Parties (COP) to the United Nations Framework Convention on Climate Change (UNFCCC) commences negotiations for a global climate deal in Paris on December 2015. It sends a heightened call-to-action, not only for world leaders to adopt a legally binding agreement on greenhouse gas emissions reductions and other urgent climate measures by governments and corporations, but also to billions of people, in their organizations and communities, to stand for climate justice and transformative social change.
We demand an end to all policies and programs that lead to the wanton pillage of nature, as well as the further deepening of poverty, inequalities, and resultant sufferings of the poor and marginalized peoples of the world.
We reject market-based profit-oriented solutions to the climate crisis that allow the commodification of natural resources and further concentration of the ownership of resources in the hands of corporations and industrialized nations.
We demand reparation from advanced industrialized countries for their historical ecological debt to the peoples of the global South. They must commit to a quantifiable emissions reduction that will limit temperature rise to 1.5°C, and unconditionally provide means and technology necessary for poor developing countries to mitigate climate change and adapt to its impacts.
We call on all nations and world leaders to put a stop to the corporate plunder and to adopt a legally binding agreement on climate change that ensures real solutions and the transfer and redistribution of resources to those without them.
There is hope for a better future. We must surge forward in working towards a world that puts people and all creation first. #
Signatories:
Sign-on Statement – Global peoples’ surge toward a better future.pdf
Sign-on-Statement-Global-peoples-surge-toward-a-better-future_ESP.pdf
Tags: climate change, climate crisis, COP21, encyclical letter, global people's surge, global warming, Paris, PMCC, Pope Francis, UNFCCC

Not just an agreement, but a just agreement needed

Golden opportunities for profit: OceanaGold in the global South